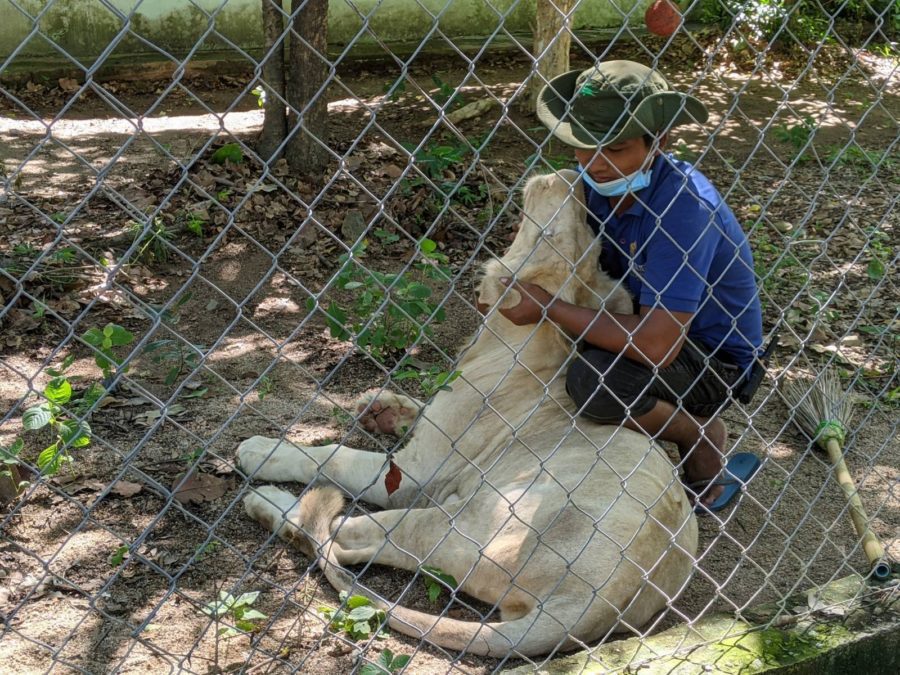 A caretaker pets the lion that was owned by a Chinese national in Phnom Penh at the Phnom Tamao Wildlife Rescue Center on July 3, 2021. (Keat Soriththeavy/VOD)

A wildlife protection group says it is concerned by potential plans to clear hundreds of hectares of forest in a wildlife sanctuary for development.

Nick Marx, a director at Wildlife Alliance, said in a video posted online that the Phnom Tamao mountain was home to sambar deer and other wildlife, and the group was concerned about information it had received about plans to clear parts of the forest. Marx said he had heard some clearing had already begun.

The group helps run a zoo in a corner of the protected area.

“This plan will harm this good place for rare animals,” he said, speaking Khmer in the video. “I have been working for the wildlife sanctuary for 20 years. I am an ordinary person without power. But I have a heart that loves animals and nature. I and other conservationists ask Samdech Hun Sen to help protect Phnom Tamao.”

The video was shared more than 5,000 times as of Wednesday morning.

Across the country, residents have reported the clearing of protected forests, and satellite imagery has also shown ongoing deforestation in many sanctuaries in Cambodia.

Wildlife Alliance, formerly known as WildAid, has worked with government rangers to patrol deforestation, though it has controversially been involved in burning the homes of people believed to be encroaching on protected areas. Pursat authorities also criticized the group in 2020 for burning locals’ tractors.

“I am working at the Tamao zoological center. The zoo is not facing clearing. But for people surrounding here, they are clearing to build roads. This is the development of the people,” Tong said.

According to a government website, the Phnom Tamao mountain area covers around ​​2,500 hectares, of which 1,200 hectares are protected forests under the Agriculture Ministry. The wildlife center is based on 70 hectares, it says.

Local newspaper Koh Santepheap on April 19 cited Takeo provincial agriculture director Srun as saying that about 300 hectares of forest land on Phnom Tamao was being considered for development, pending approval from the government.

Over the past couple of years, the government has been privatizing vast swaths of state land, including 127,000 hectares of Koh Kong’s parks — or more than 11 percent of the province’s 1.1 million hectares. Other plots have gone to well-connected individuals and businesses, such as the children of the prime minister and land minister, and wife of a ruling party senator.

Residents around the country have accused forest rangers of targeting small-scale loggers while enabling larger, well-connected timber trafficking businesses to continue. However, the Environment Ministry has repeatedly said that large-scale logging no longer exists in the country.