Corruption Not to Blame for Court Backlog, Justice Minister Says 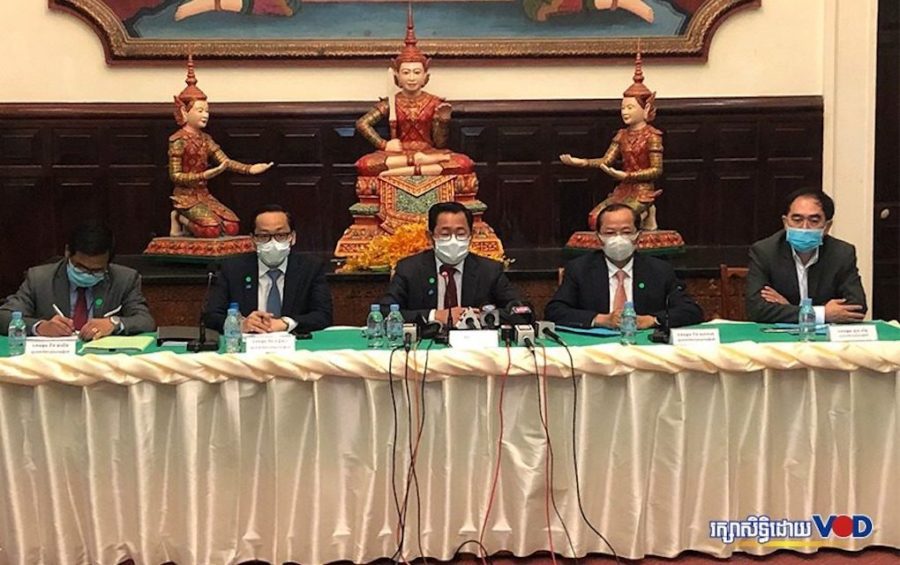 Justice Minister Keut Rith, center, speaks at a press conference launching a campaign to resolve the backlog in court cases at the Justice Ministry on May 18, 2020. (Chorn Chanren/VOD)

Justice Minister Keut Rith on Monday said anti-corruption measures were a key part of a plan to reduce the criminal case backlog at the courts, but also said corruption was not the cause of the current case pileup.

During a press conference announcing new efforts to speed up the legal process in criminal cases, Rith told reporters that measures established by the Anti-Corruption Unit (ACU) were the foundation of the campaign.

ACU head Om Yentieng had described the campaign’s goals in four words, according to Rith.

“He called to make the campaign fast, accurate, just and corruption-free,” the justice minister said.

Rith said the efforts also aimed to address overcrowding in prisons, which officials have attributed to a spike in arrests for drug crimes.

Asked about accusations of courts detaining people in order for officials to solicit money from the accused, Rith said these were just claims and people should file complaints if they wanted solutions. He said he welcomed information and tips for the ministry to investigate.

Yentieng could not be reached for comment on Tuesday.

Under the new measures, Rith said he expected up to 70 percent of the nation’s nearly 40,000 pending case files to be resolved transparently within six months. The minister said the campaign would last six to nine months and would be a step toward reforming the court system.

The courts have long been criticized by judicial watchdogs and rights advocates for alleged corruption and accused of being under the thumb of the ruling CPP, which officials deny.

However, Rith said the pileup of case files was not related to corruption and instead attributed delays in justice to human resource issues, an increase in drug offenses and procedures applied by some court prosecutors.

Prosecutors generally have three options to apply a charge — submit for a direct hearing, order to appear immediately or send the case to an investigating judge — but Rith said almost all prosecutors choose the last option, which creates a backlog as the accused have to wait for the results of an investigation. Improving the capabilities of court officials would help reduce the number of pending cases, the minister said.

Justice Ministry spokesman Chin Malin echoed Rith on Tuesday, saying corruption was not the reason for the case overload, but also said that the ACU was participating in the campaign in order to discipline any errant court officials in cases where corruption or other “mistakes” were found.

Malin attributed the case pileup to the success of the government’s actions against drug, fishery and forestry crimes.

“Because of the success in implementing all of these campaigns, it led to crackdowns, arrests of a lot of offenders and a lot of cases have been sent to the court, but the resources of the court are still limited,” he said. “The reasons we found [for the backlog] have nothing to do with corruption.”

Malin also defended the courts against accusations of graft, claiming that reported cases had been investigated or dismissed based on their merits.

Pech Pisey, executive director of corruption watchdog Transparency International Cambodia (TIC), said the country has regularly been one of the lowest-ranking countries in the organization’s Corruption Perception Index, and that Cambodia’s courts are viewed by respondents as the most corrupt institution in the government.

Last year, Cambodia ranked 162nd of 183 nations, down one place from the previous year.

But while TIC and other civil society groups can raise awareness of corruption, Pisey said it was difficult to act on corruption unless they had evidence of a specific case to pursue.

“It is the authority of law enforcement officials [to act on corruption],” he said. “Civil society and [general] people just offer tips…. Authorities continue the investigation to find more evidence and information to clarify whether the accusations are right or wrong.”

But Pisey said some tips provided by TIC and other civil society groups have not been investigated, causing people to see the courts as corrupt.

In addition, he said reform and transparency in the justice system could improve the nation’s standing on anti-money laundering watch lists and in other corruption indicators.

Earlier this month, the E.U. announced it would apply oversight measures against “high-risk” countries that were newly added to the bloc’s money laundering watch list, including Cambodia, and Cambodian officials said they were working hard to get the country taken off the list.

“Whenever there is open access to information, we can participate in preventing corruption and urging public institutions to have more accountability and can make Cambodia change its scores from its evaluations,” Pisey said.

Am Sam Ath, spokesman for human rights group Licadho, told VOD that the government measures could be effective in addressing some of the case backlog, but systemic reforms in line with the Constitution and Paris Peace Agreements were needed, especially in terms of treatment of dissidents.

“If we want to change the court system to process [cases] effectively and fairly, the whole court system has to be independent. [Then] that will be possible,” Sam Ath said. “But if we create a committee to speed up the procedures, it just helps in part to speed up cases.”

The nation’s courts have 39,152 open criminal cases as of April 14, with 12,651 detainees, according to a Justice Ministry handout given to reporters on Monday.