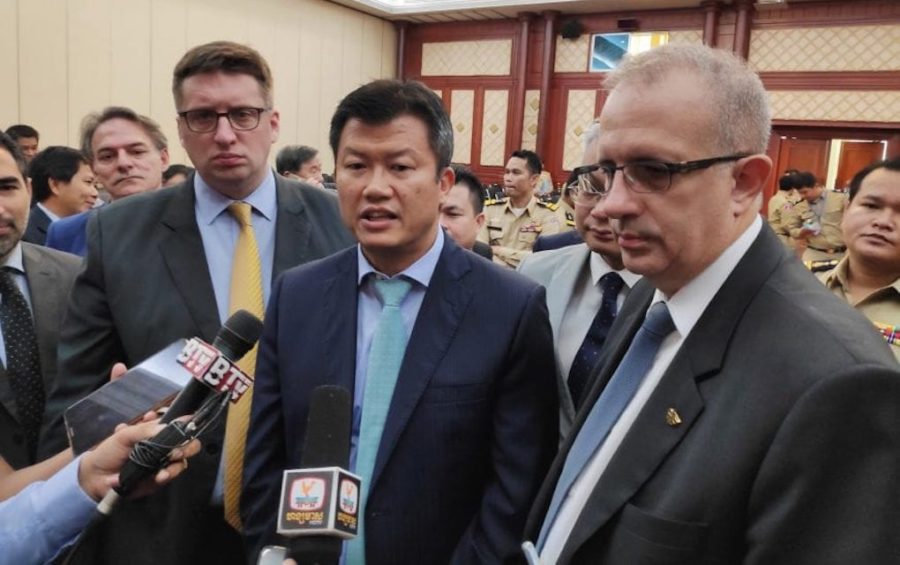 Meach Sophanna, president of the Counter Counterfeit Committee of Cambodia (center), and Arnaud Darc, chairman of EuroCham (right), speak with reporters following the signing of an MoU pledging to combat the proliferation of counterfeit goods in Cambodia on September 12, 2019. (Vann Vichar/VOD)

A government anti-counterfeit committee and the European Chamber of Commerce in Cambodia on Thursday pledged to join forces to fight the illicit flow of fake goods in the country, part of the region’s multibillion-dollar counterfeit goods market.

The leaders of the Counter Counterfeit Committee of Cambodia and EuroCham signed a memorandum of understanding in Phnom Penh, which showed authorities’ intentions to protect European businesses operating in Cambodia from harmful, illicit businesses that traded in counterfeit goods and poor quality knockoffs, according to a committee statement.

Meach Sophanna, the committee’s president, said under the agreement, EuroCham members had promised to act as whistleblowers on fake products, which could lead to legal action.

“We will have information exchange. We will cooperate on training, providing understanding about the logos of products and the products violating copyrights,” Sophanna said.

Authorities needed to take serious action to stop the flow of counterfeit goods, and need support from the private sector and consumers, he added.

Last year, the committee reported that counterfeit goods in Cambodia included fake medicines and cosmetics, and expired food products, with some illicit goods made in Cambodia and others imported.

The counterfeit goods market in Southeast Asia, not including fraudulent medicines, is estimated to generate approximately $33.8-35.9 billion annually in illicit revenues, according to a U.N. Office on Drugs and Crime (UNODC) report released in July.

“The illicit trade in counterfeit goods is often perceived as a ‘soft’ form of crime, but the trafficking and consumption of goods produced with hazardous or substandard materials poses serious public health and safety risks,” the report says. “It also provides criminals with a significant source of illicit income.”

In addition, the UNODC says Vietnam, Cambodia and Malaysia are among the “top origins of falsely branded cigarettes and other tobacco products seized in Europe.”

Counterfeit clothes and fabrics made in Cambodia, Malaysia, Thailand and Vietnam are exported directly and indirectly to Europe and other international markets.

EuroCham chairman Arnaud Darc said that the private sector hoped that following the new agreement their complaints against fake products would be effectively resolved in a timely manner.

The chamber, which represents 340 businesses, declined to reveal the number of complaints from its members over counterfeit products.

In a statement, the chamber said its cooperation would help the anti-counterfeit committee access information from trademark-holding European businesses about suspected fake goods, and identify and find such goods in the country.

They would also collaborate to strengthen regulations on counterfeit, illegal and unlicensed products to help the committee “eliminate goods that pose a serious danger to consumers and Cambodia’s international reputation.”

Darc said in the statement that the chamber’s cooperation would “boost the confidence of consumers, rightsholders and investors” in the government’s fight to stop the circulation of counterfeit and unlicensed goods in the market.

In March, at an event in which 70 tons of counterfeit products were burned, Interior Minister Sar Kheng laid blame on lower-level authorities, claiming they were incapable of finding offenders. He said he would not attend the ceremony in the future if authorities could not make arrests.