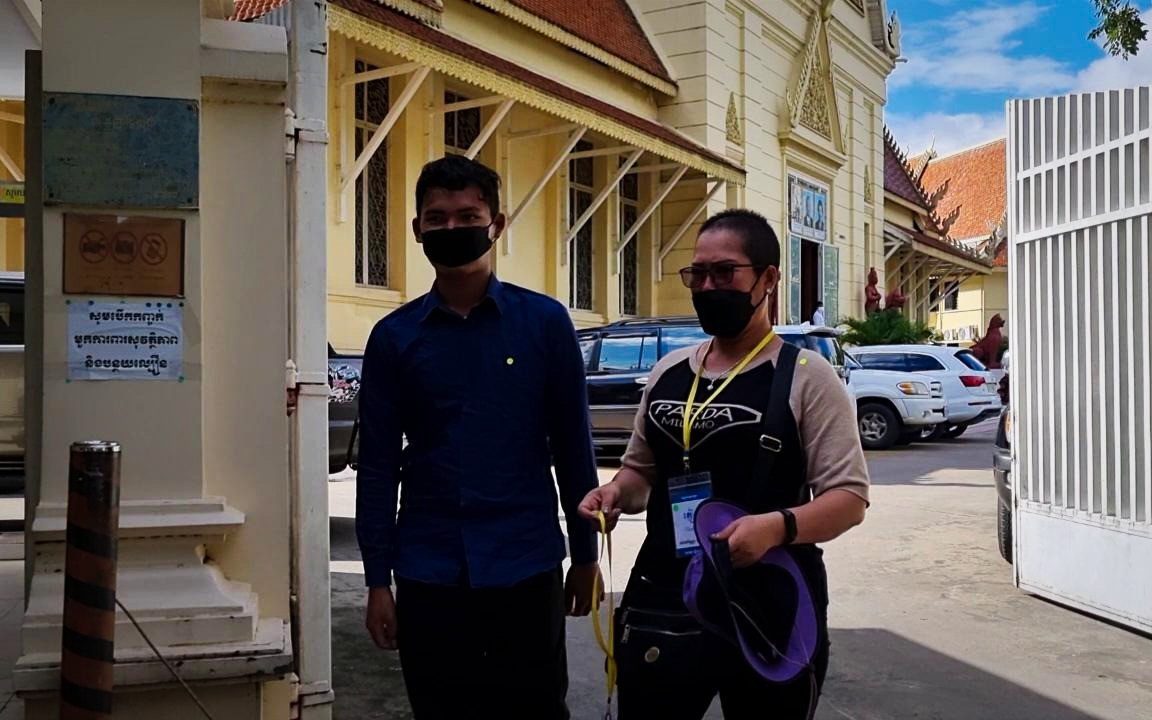 Kak Sovannchhay and his mother Prum Chantha walk out of the Supreme Court in Phnom Penh on October 12, 2022. (Hy Chhay/VOD)

The Appeal Court in Phnom Penh changed probation measures against the teenage son of a jailed former opposition official on Friday in a closed-door trial.

Kak Sovannchhay was arrested for alleged incitement and insult of public officials within messages sent in private group chats. He was convicted by the Phnom Penh Municipal court in November 2021 to eight months in prison, but served only four months and 15 days while the rest of the sentence was suspended with a two-year probation.

In October, Supreme Court presiding judge Kong Srim upheld a previous Appeal Court decision to keep Sovannchhay’s conviction. But he rejected the court supervision conditions and returned the case back to the Appeal Court for retrial on that point only.

According to Sam Sokong, the teenager’s lawyer, the retrial was ordered because the lower court applied the measures of Article 119 of the criminal code to Sovannchhay’s case. The Supreme Court indicated that it should have used Article 165 because Sovannchhay is a minor.

Sovannchhay turned 18 in November, after the retrial had been ordered but before it took place Friday.

During the trial on Friday morning, presiding judge Suos Sam Ath announced a closed-door hearing “since this case is related to a minor” and asked any reporters, NGO staff and embassy staff to leave the courtroom.

The presiding judge then gave five new probationary measures for Sovannchhay in place of the old ones, according to Sokong, which are exactly the same as those listed in Article 165. They allow him to undergo medical examination or treatment, follow instruction or training at state or public school, but not allow him to associate with drinking establishments or people involved in crimes, nor have or carry weapons, explosives or ammunition.

Sokong added that he had asked the court to get rid of any probationary measures against Sovannchhay.

“I think the decision is still not fair for my client because he is a minor with autism,” Sokong said, adding that the measures restrict the freedom of minors, who need more freedom than adults.

Sovannchhay’s mother, Prum Chantha, told VOD by phone that the decision does not yet provide justice for her son and is not based on independent principles, since he should have rights to speak out.

She added that he was under pressure given the imprisonment of his father, Kak Komphear, and had bad experiences in prison that continue to trouble him. He has no friends or people to communicate with. Most of the time, he stays at home.

Her husband Komphear has been convicted in at least two cases for incitement and plotting in relation to his alleged involvement in Sam Rainsy’s attempt to return to the country in November 2019.

“It is better for the court to drop all charges,” she said of Sovannchhay’s case. “This is still injustice, but it has turned from serious to a bit lighter.”

Chantha said she will consult with their defense lawyer whether to appeal the decision or not.