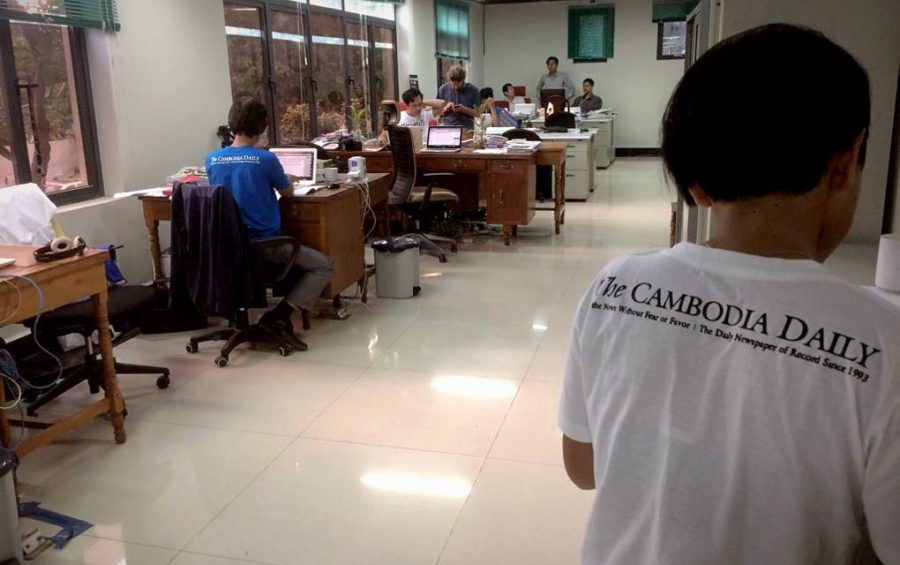 Journalists working on the final issue of the Cambodia Daily in the newsroom in Phnom Penh on September 3, 2017 (Ananth Baliga)

On December 4, provincial deputy prosecutor Ra Borandy said he was awaiting orders from his boss about whether to appeal. “I’m not sure what decision he will make,” Borandy said at the time.

Court spokesman Keo Pisoth said on the same day that a written notice about dropping the case had been issued a day prior, and it gave the provincial prosecution one month to appeal.

But Pisoth said this week that the prosecution had already filed an appeal on November 24, the same day of the trial hearing when the plaintiff withdrew his complaint and Judge Kong Taing Meng dropped the case.

Pheap and Zsombor were charged with incitement after a reporting trip to the province in 2017 about upcoming commune elections, charges widely criticized by media advocates including Reporters Without Borders.

Peter said on Friday that the prosecutor’s decision to appeal the court’s ruling was “purely and patently political.”

“At last year’s hearing the plaintiffs made no attempt to defend their complaint against Pheap and me and withdrew it, and the judges unanimously ruled to drop the charges,” said Peter, who is now living abroad. “The prosecutor is proceeding with the case without a shred of evidence, because there isn’t any, or even the pretence of an argument.”

“This case is and always has been about one thing — persecuting honest journalists doing an honest job covering news the country’s dictators don’t like, and intimidating anyone else thinking of doing the same,” Peter said.

The Cambodia Daily stopped printing its newspaper in September 2017 amid pressure over a disputed multimillion-dollar tax bill. Dozens of radio stations — including those carrying VOD’s broadcasts — were shut down around the same time.

Soeng Senkaruna, spokesman for rights group Adhoc, accepted the prosecutors’ right to appeal, but noted that the proceedings had been going on for years now, and the judge had made a clear decision to free Pheap and Peter from the charges.

Disclosure: Dickison previously worked at the Cambodia Daily with Pheap and Peter.