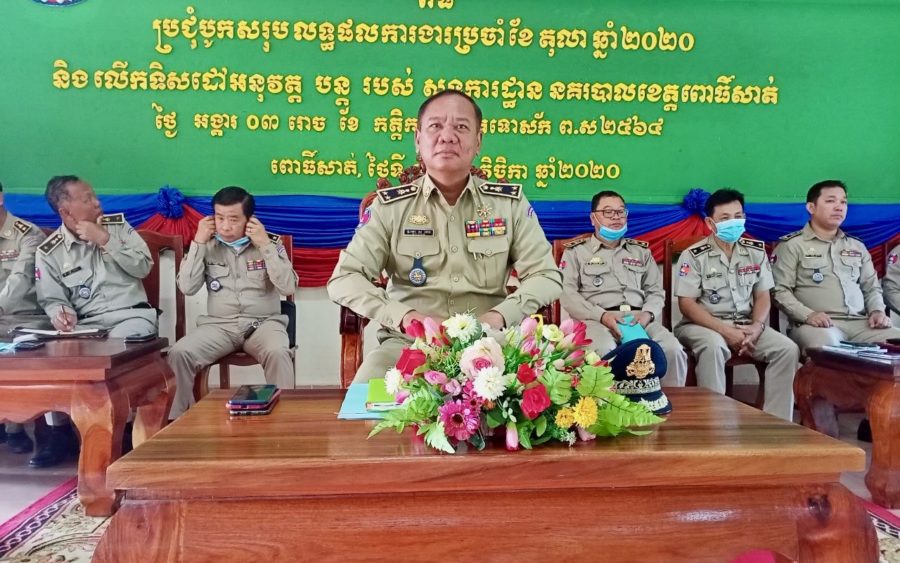 The Kampong Chhnang Provincial Court has summoned the chief of the Pursat provincial police to appear for questioning after a local land buyer accused him of making a fraudulent land sale.

Khut Puthy, the 33-year-old buyer, is now seeking compensation from chief Sar Theng after the provincial official accepted money from him for the sale of more than 10 hectares of land that he may not actually own. When asked about the lawsuit, the chief of Svay Chrum commune in Kampong Chhnang, where the sale took place, told VOD he believes documents Theng has provided claiming ownership of the land are not legitimate.

“The documents that he sent me are not official documents,” said commune chief Y Phuon, adding that Theng had only sent pictures of the documents by phone. “But when I verified them with the books of the commune, they were not there, so I conclude that this is a fake document.”

In his complaint to the Kampong Chhnang court, Puthy states he and two other buyers had on July 1 of last year signed a purchase agreement for the land in the Silang village of Rolea Ba’ier district.

According to his complaint, Puthy and the other buyers transferred about $100,000 to Theng in stages as they prepared documents to transfer the land. Puthy claimed Theng had said he was measuring the land and promised the transfer would be complete in a short time.

“On the contrary, I just waited for weeks and they kept making excuses, saying this and that,” Puthy stated in the lawsuit. “I tried to contact Sar Theng and [his accomplice], but they never picked up the phone.”

Puthy is now seeking $300,000 in compensation from Theng, who denies any wrongdoing but says he will comply with the court summons. He is scheduled to appear on February 28.

For his part, Theng says the sale was made in good faith but that local officials have not done the administrative work to transfer the land.

“This is due to the fault of the village and commune authority administration,” he said in a response to the lawsuit, adding that he could not be held liable for that under the purchase agreement signed with Puthy. “I had informed the other party for understanding and to get more time, but Khun Puthy, the buyer, had published in the media and filed a complaint against me …  in order to damage my reputation and dignity.”

Commune chief Phuon believed the land in question was actually owned by people from Phnom Penh, who he said had held the land since 2008 and had clear documentation for it. Phuon said these owners rented the land to local farmers.

However, even though he doubted Theng owned the land, explaining the police official had never spoken to him about that, Phuon said Theng had last year ordered a fence built on the property.

“I had stopped it, but it still continued until it was finished. I reported it to the province and it became quiet,” Phuon said.

Speaking about the disputed deal now heading to court, the commune chief said neither party had consulted him during the sale process.

“Now they’re blaming me that I did not issue the title and this is not right,” Phuon said. “If they continue to do this, it is over for the local authority.”