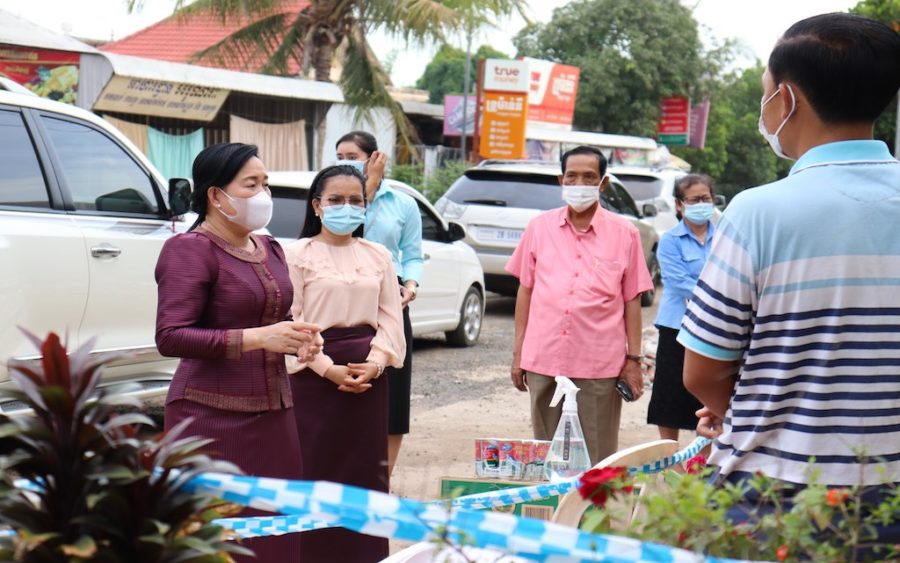 Four provinces outside Phnom Penh saw more than 100 daily Covid-19 cases each, four among the most affected administrations have stopped posting daily counts, and several previously little-affected areas are seeing an uptick in cases.

Provincial officials on Thursday raised concerns about the Covid-19 cases, which have risen outside Phnom Penh since last month, as the country again recorded over 700 daily cases. The current “February 20” outbreak originated in the capital, and previously the vast majority of cases were found in the city.

The Health Ministry announced 729 new positive cases countrywide on Thursday, down slightly from the previous day but up from 599 a week ago.

Kampong Speu province was among four provinces outside Phnom Penh named by the Covid-19 subcommittee on Thursday as having over 100 daily cases. But the province has stopped posting daily counts since announcing a significant rise to 69 cases on Sunday.

Deputy provincial governor Long Bonareth told VOD that Kampong Speu had 138 cases on Wednesday — more than 10 percent of the province’s total of 1,227 positive cases so far. The province has also seen 357 recoveries, putting active cases at 845. Some 1,956 are in quarantine, Bonareth added.

Covid-19 cases are continuing to increase in the province, and most cases are related to outbreaks among factory workers connected to Phnom Penh, she said.

The workers tend to travel in groups — including commuting with 30 to 40 others packed in trucks, she said. The province has more than 130,000 factory workers, she added.

“We have to be ready to prevent [transmission], and find equipment and places [for them] to stay” in quarantine, she said.

It was a concern, but her province had imposed no curfew and instead had locked down individual affected houses. People were following precautions, she added.

Provincial health department director Or Vannthen agreed that the workers’ commutes were of significant concern.

“It’s difficult for them to keep social distancing, especially when they go to work and return because [they] ride together on the same vehicle,” he said.

However, Kampong Speu governor Vei Samnang, when asked why no updates had been published by the administration, said there were no updates because there were no new cases. He hung up before a reporter could ask more questions.

Samnang said last month that it was important to publish the information.

“We don’t hide. This information must not be hidden, and we must disseminate it to the people,” he said in May.

Preah Sihanouk province has also stopped posting updates, and was also named as a province with more than 100 cases on Thursday.

Provincial spokesman Kheang Phearum acknowledged that the province had stopped publishing the information, but asked a reporter to contact the Health Ministry as it was a decision made by “leaders.”

“There is still transmission. We have subsequently found” cases, Phearum said.

Meanwhile, other provinces that previously saw few cases have seen a recent uptick.

Battambang has recorded just 303 total cases, but 69 of them — more than a fifth — were recorded in one day on Wednesday.

Deputy governor Soeum Bunrith said the western province’s outbreak was related to people returning from Thailand via Pailin province. He said the situation was under control thanks to the lockdown of affected houses.

Kamrieng district also now has a curfew from 10 p.m. to 5 a.m., and a ban on dining at restaurants.

“This number is worrying, but in the meantime we’ve also taken measures for people in Kamrieng,” he said.

“June 1 is the highest number since the Covid-19 outbreak,” he said, explaining it was related to a company with nearly 50 employees, some of whom had returned from Phnom Penh.

Based on available information on the 25 Facebook pages of provincial and municipal administrations, three days of case numbers from Monday to Wednesday show hotspots surrounding the capital, which relaxed travel restrictions last month despite ongoing transmission. Provinces along the Thai border also have seen a moderate number of cases.

In Kampot, where a curfew was imposed earlier this week in relation to a casino outbreak, administrative chief Veth Vathana said everything was now under control thanks to the 8 p.m. to 5 a.m. curfew and ban on alcohol sales.

In Kampong Cham, administrative chief Khorn Pros said nearly two-thirds of the province’s 917 total cases still actively had Covid-19. It had seen 347 recoveries and three deaths so far, and about 3,000 were in quarantine, he said.

The outbreaks were linked to factories, with around a quarter of the province’s 17 factories recording cases, he said.

He said the numbers should be down by July. He echoed concerns over workers’ commutes as well as meals at work in close quarters. The province will order factories to reduce the number of workers, he said.

Health Ministry spokesperson Or Vandine said she did not have numbers on hand so could not comment on whether provinces were seeing an increase in cases.

In general, the situation is still a concern, and she said it was up to people to take precautions.

Foreign embassies said this week that they were gathering information to try to keep their citizens in Cambodia informed and continue the countries’ development projects. Only the British Embassy answered specific questions about whether enough information was available.

The British Embassy said it receives daily updates “from a range of official and unofficial sources,” including the Health Ministry, its Covid sub-committee, communicable disease control department and spokespeople, Phnom Penh City Hall, provincial authorities, public announcements and “via Telegram.”

“We have received COVID updates at varying levels of detail (nationalities, provinces, district/communes, age), but recent Health Ministry updates have reduced the level of granularity,” it said. “We have worked with relevant ministries and authorities to get up-to-date information, for example clarifying where and how foreign nationals can get vaccinated in Cambodia.”

All governments were still learning to deal with this pandemic, in particular how best to share information and in what level of detail to be of most use, it said.

“While we have not always received a response as quickly as we might have wished, we understand completely that with the ever-changing picture and the need to respond to the latest situation, it hasn’t always been possible for the relevant authorities to respond to specific queries immediately,” it said.

The information it receives is sufficient to keep British nationals informed, it said, adding that the delivery of the U.K.’s projects in Cambodia have not been affected.

The Japanese Embassy said it alerts Japanese residents of the ongoing outbreak by sharing statistics from the Health Ministry and other authorities.

“While using public information issued by relevant authorities, we have been in close contact with the Royal Government in exchanging information and expanding mutual cooperation,” it said.

“The Australian Embassy in Cambodia continues to work closely with the Cambodian Government officials and the Ministry of Health, including to adapt our development assistance programs to support Cambodia’s response to COVID-19,” it added.

U.S. Embassy spokesperson Chad Roedemeier said it updates its website twice a day and sends emails to American citizens with information they need to stay safe.

“We have longstanding and close ties with the Ministry of Health, and U.S. health agencies have been working with the Cambodian government from the start to help control the spread of COVID-19.”

A French Embassy spokesperson asked which embassies had also been asked, and what VOD was going to do with the answers. They did not answer the questions.