Covid-19 Cases Rise to 35, Over 20 Linked to Malaysia Gathering 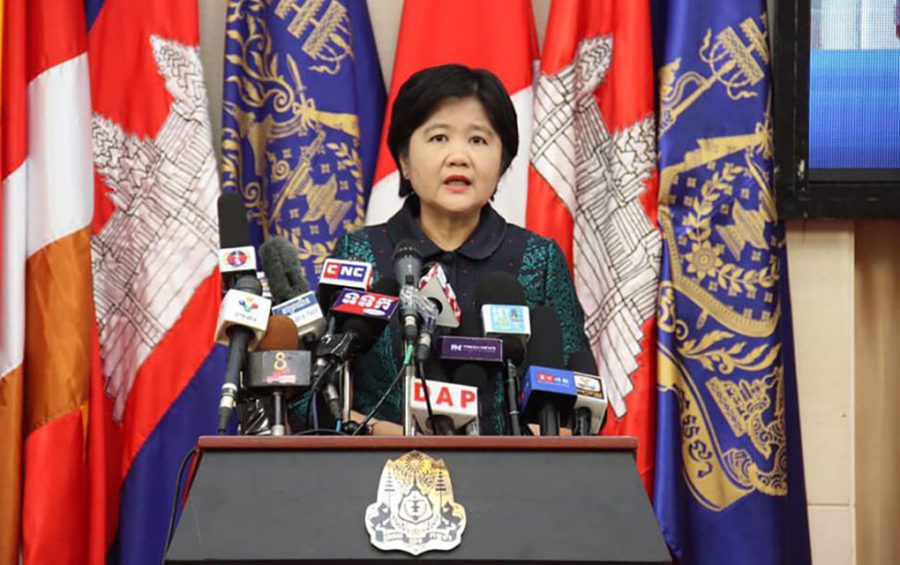 Health Ministry spokeswoman Or Vandine speaks at a press conference on March 18, 2020, in a photograph posted to the Government Spokesperson Unit’s Facebook page.

Nineteen Cambodians and three Malaysians who have tested positive for the respiratory disease had recently attended a Muslim religious gathering in Malaysia, the Health Ministry said in a statement on Tuesday.

Some 16,000 people, including 1,500 foreigners from dozens of countries, attended the gathering from February 27 to March 1 at the Sri Petaling Mosque in Kuala Lumpur, Reuters reported on Tuesday.

The gathering — during which worshippers prayed side-by-side, shared plates and washed hands regularly, as washing before prayer is part of Muslim religious practice — has been tied to hundreds of new Covid-19 infections across Southeast Asia, according to Reuters.

In Cambodia, more than 1,100 people have been tested for the new viral strain to date, Health Ministry spokeswoman Or Vandine said during a press conference on Wednesday morning.

Vandine urged the public and authorities to implement preventative health measures together, noting the need to wash hands regularly with soap or hand sanitizer, refrain from touching one’s face, and staying 1.5 meters away from other people, as well as avoiding gathering in big groups unless absolutely necessary.

The official said she admired a bride and groom who had posted on Facebook about their decision to cancel their upcoming wedding party in order to avoid potentially transmitting the virus among their guests.

“Preventive measures are very necessary at any stage,” Vandine said.

As the nation’s infection count nearly tripled on Tuesday, the government put in place a number of new restrictions on public gatherings in an effort to prevent a wider outbreak of the virus. Covid-19, which was first detected in China, has spread to more than 150 countries and territories, and been linked to more than 7,400 deaths worldwide.

The Cambodian government has ordered closed public and private schools, museums, dance clubs, karaoke venues, or KTVs, and cinemas, as well as banned religious gatherings and public concerts. The Royal Palace announced on Wednesday that it would close to tourist visitors, according to a statement.

In the capital late Tuesday, armed police shut down bars on a usually busy street in Tonle Bassac district, which is full of restaurants and cocktail bars frequented mostly by expatriates, according to two Facebook posts from eyewitnesses.

The nine men are among 79 people who recently entered Cambodia after attending the Muslim gathering in Malaysia, the minstry said in a statement.

The Cambodians range in age from 27 to 57 years old and are being treated in provincial hospitals in Siem Reap, Kampong Chhnang, Koh Kong, Tbong Khmum, and at Phnom Penh’s Khmer-Soviet Friendship Hospital.

The three Malaysians, aged 58, 61 and 66, who recently arrived in Cambodia from Malaysia, are being treated at Kep Provincial Hospital, according to the ministry.

The Health Ministry said an emergency response team and doctors are monitoring those known to have had direct contact with people who tested positive, including those who had attended the gathering in Malaysia.

Vaccine-Seekers Rush to Factory as Campaign Focuses on Garment Workers

Risk of Covid-19 Outbreak in Prisons at ‘Emergency’ Levels