Covid-19 Vaccine Rollout Gets Going at a Mild Pace 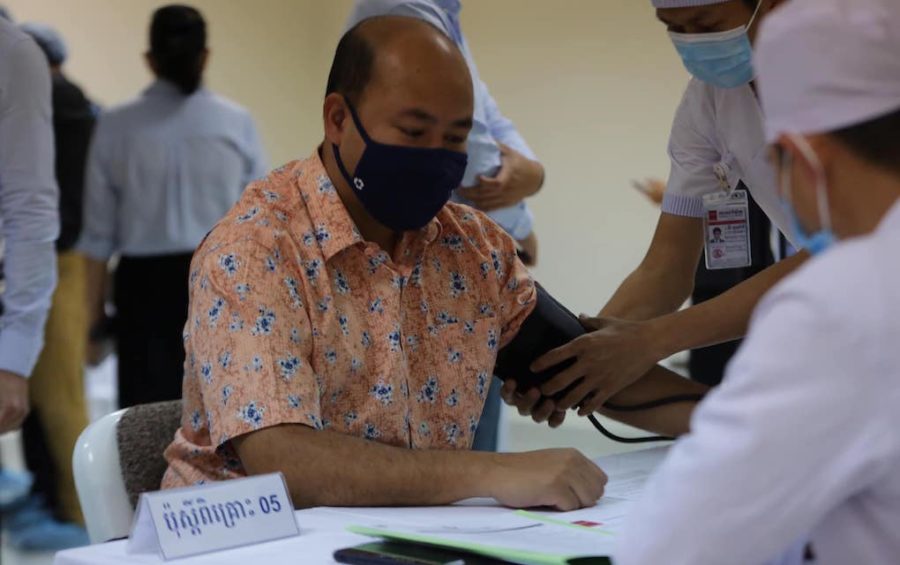 Hun Many, one of Prime Minister Hun Sen’s sons, receives a medical checkup at Calmette Hospital on February 10, 2021, in this photo posted to his Facebook page. Many did not receive the Covid-19 vaccine due to a cold.

Prime Minister Hun Sen’s son Hun Many and son-in-law Dy Vichea missed out on their Covid-19 jabs due to health issues as four participating hospitals in the country’s vaccination rollout gave out 339 shots on the first day — toward an ultimate target of 10 million people vaccinated.

The vaccination campaign began on Wednesday at the four Phnom Penh hospitals, with two of Hun Sen’s sons, Hun Manet and Hun Manith, among the first to get the Sinopharm shot. Defense Minister Tea Banh, 75, already received a jab last week before Hun Sen, 68, was alerted he was too old to participate himself.

Manet received the jab at Calmette Hospital, where Many and Vichea also registered for a vaccination. However, Many had a cold and Vichea had an unspecified health condition preventing them from receiving the Chinese-manufactured vaccine, according to Health Ministry spokesperson Or Vandine.

Some 600,000 doses of the Sinopharm vaccine arrived in Cambodia on Sunday as Calmette, Ang Duong Hospital, the Khmer-Soviet Friendship Hospital and the National Pediatric Hospital were made available for high-ranking officials and journalists.

The Health Ministry said soldiers and doctors would also be prioritized for the vaccine, and those who received their first shot must return between 14 and 28 days for their second.

At the children’s hospital, BTV reporter Chea Thirith, 29, said he was the first among the journalists there to get the shot. After half an hour, he felt fine, he said.

“I felt very happy that I was vaccinated first,” Thirith said.

Cambodia-China Times reporter Kuon Sambo said the vaccine might not be 100 percent protection from Covid-19, but he still felt protected.

“We injected the vaccine and we felt warm [in our hearts],” Sambo said.

At Ang Duong, Planning Ministry official Phoeun Kosal said he was a little nervous about the jab, but doctors had checked his blood pressure and heart rate and he was fine.

“I felt scared, but after being vaccinated, I feel normal,” Kosal said.

Yong Kim Eng, director of the People’s Center for Development and Peace, encouraged the government to find out and release more information about the Sinopharm vaccine to give people confidence in it.

“How far the World Health Organization recognition process has gone, and how much progress has been made — so that people do not have to worry about the risks and other side effects,” Kim Eng said.

The Sinopharm vaccine was produced by the firm’s Beijing Institute of Biology Products, and is being assessed by the WHO. It anticipates an evaluation decision next month.

Hun Sen has previously said that Cambodia has secured 11 million total doses based on pledges from Covax, Australia and China, and would look to buy 9 million further doses from Thailand, Russia and India in order to inoculate 10 million people.