CPP Congress to Vote on Next ‘Successor,’ Future Cabinet Ministers 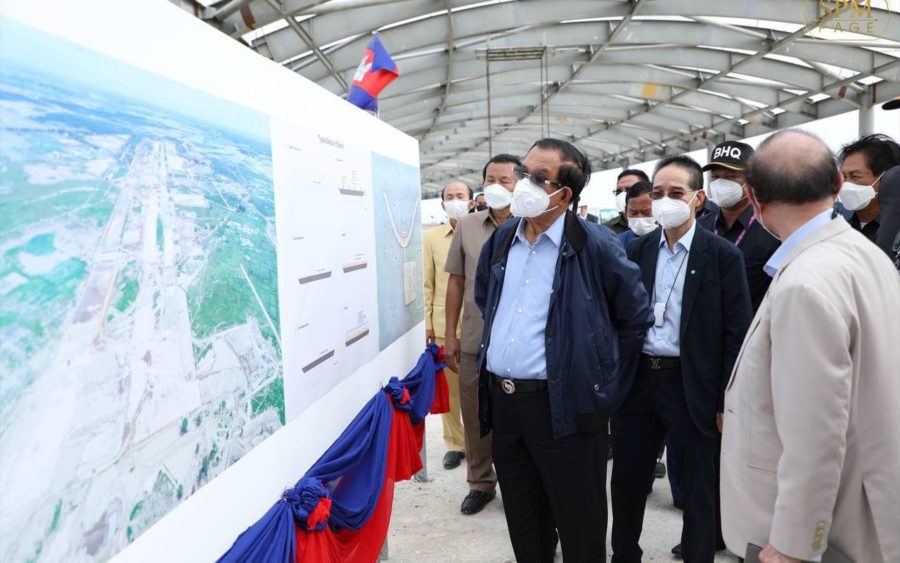 UPDATED 7:45 p.m. — Prime Minister Hun Sen announced he would call a CPP congress to pick the party’s next prime ministerial candidate and approve a list of future cabinet members before the end of the year, further solidifying his succession plans.

After months of teasing Hun Manet as a potential successor, Hun Sen last week voiced a full-throated support for his eldest son to take over as prime minister, which has since received near-ubiquitous support from all quarters of the government.

While scoping out construction at the new Phnom Penh airport — which he said would be called the “Techo Takhmao International Airport” — Hun Sen said Thursday a CPP congress would select the party’s “successor” and a new cabinet on December 24.

Hun Sen’s announcement of a party congress comes two days after Interior Minister Sar Kheng released an unsigned letter on his Facebook account saying he would support whoever a party congress selects as the CPP’s next prime ministerial candidate. Kheng has not explicitly endorsed Hun Manet and was noticeably silent over the weekend as hundreds of endorsements poured in for the prime minister’s son.

Hun Sen reiterated on Thursday that he intended to be prime minister again in 2023, but did not reveal when a transfer of power to a younger generation of CPP leaders would happen. In the past, he has indicated this could happen before or after the 2028 general election.

“[We] finished the list for the cabinet, [and will] preserve the [current] cabinet. But this is not for 2023, as in 2023 I am still the candidate,” he said, asking businesses to remain unperturbed by potential transfer of power to his son because “the system would not stray too far.”

Without revealing any names, he said that “almost half” of the people on the cabinet list had doctorate degrees, and those who didn’t at least had their masters. All the proposed ministers were currently under 60 years old, he added.

Hun Sen also took an opportunity to blast anyone who opposes his regime, saying it would be “impossible” for another party to assume power. He seemed to be referring to the opposition CNRP, which has been dissolved and effectively inert for the last four years.

“Anybody can say whatever they want, the CPP is still the CPP that has solidarity and unity, and you can make whatever judgement and you can wait to see on the 24th how we are in solidarity with each other,” he said, adding that those outside the party should not interfere with the succession procedures he’s undertaking.

CPP spokesperson Sok Eysan described the new cabinet list vote as a normal procedure, but he said he didn’t know whether the vote would include a ballot on the future prime minister, declining to explain the process of the congressional vote.

“This [cabinet announcement] is the implementation of the normal procedure of the CPP, and everything must be under control in advance so as not to allow the loss of control, especially in terms of human resources for the successor,” he said, noting this was a preparation for the party in the medium and long term.

However, Heng Sour, Labor Ministry secretary of state and CPP central committee member, posted on Facebook on Thursday that he would vote for Hun Sen’s son Hun Manet for the prime ministerial successor, suggesting the meeting on December 24 would include a vote for the premiership.

When asked about Hun Sen’s health or potential fractures within the party, Eysan dismissed either notion.

“There are no such issues, because in regard to Samdech [Hun Sen’s] health, he went to check the construction site of the new airport in Kandal province [and] you can see the truth, that he had spoken many hours without tiring. If he was sick or not well, he would not talk for many hours.”

Eysan continued: “Regarding any fracture in the CPP, there is none because the CPP is firmly holding the power in its hands.”

In contrast, CNRP vice president Mu Sochua saw the decision to vote on members, and the earlier announcement to push Manet as prime ministerial successor, as a sign of internal disagreement, which she called a “taboo” in the party.

“I believe the 24 December party meeting is a deal made between the CPP top leaders from the [Hun Sen] and [Sar Kheng] camps. It is a package deal: Hun Sen will get to nominate [Hun Manet], the Sar Kheng camp will get key positions in the best cabinet,” she said in a message.

Sam Kuntheamy, director of the election monitoring NGO Nicfec, told VOD that Hun Sen appears to be putting together a plan for the future before any unexpected events could occur.

“When there is any problem, the prepared cabinet can go to work. … I have not seen the roles of the new cabinet yet or this shadow cabinet. Unless we have seen the documents, then we will know their roles.”

“This is part of his plan. There are 10 years more to go and that’s a long time,” he said, speculating that the premier could be preparing successors in case “he has health problems or … his health is deteriorating, as we cannot see the future.”

Responding to VOD via Facebook, analyst Lao Mong Hay also saw it as a way to secure the party’s future: “It might well be a way for the PM to ensure that in 2028 his son will [be] nominated his party’s prime minister candidate should it did not approve the PM’s nomination for 2023.”

As for who will be on the cabinet list released this month, exiled political analyst Seng Sary predicted that it will follow the proposed future premier, stacked with children of the current political leaders.

Updated at 7:45 p.m. with comments from Mu Sochua