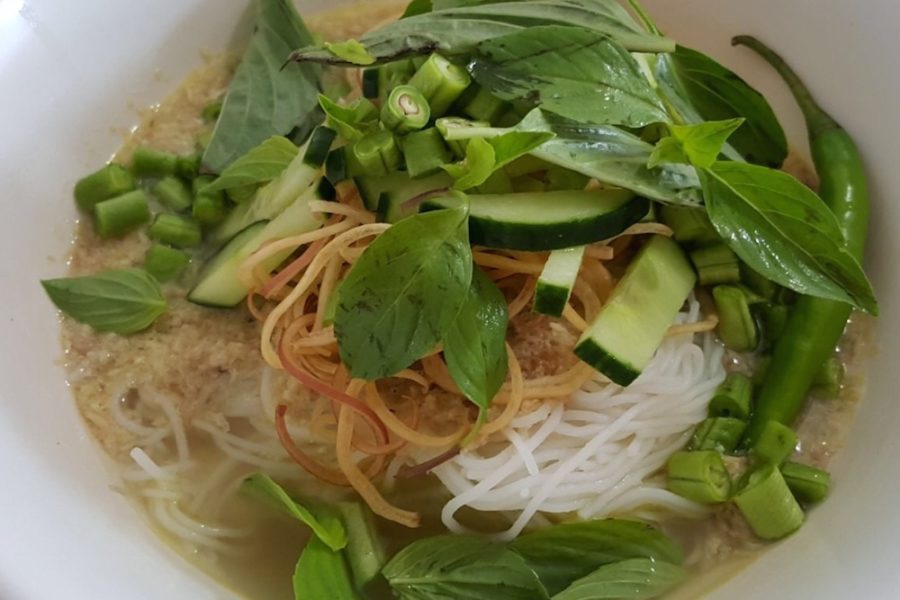 The ruling party will strike down the nascent politicization of cold Khmer noodles by joining rumored opposition plans to mark June 9 as Num Banh Chok Day, ordering its grassroots activists to prepare, serve and consume the dish en masse across the country.

The CNRP activists were accused of violating the Supreme Court order that dissolved their party — the country’s main political opposition — because they gathered for the meals and posted pictures online.

“They want to turn the issue of num banh chok into a political matter. That anyone who eats num banh chok are all their supporters,” Hun Sen said.

“Even some num banh chok sellers are scared.”

He said there was lingering coordination taking place among former members of the dismantled opposition, an attempt to retain and resuscitate support for a party the Supreme Court had deemed illegal.

“This is like a trick that Pol Pot called ‘the rust corrodes the iron’ — but it will never win against Hun Sen’s ax,” Hun Sen said, referring to a Khmer Rouge phrase associated with its staging of armed strikes into the 1990s even after its political downfall.

The Supreme Court order dissolving the CNRP has been widely criticized as unfounded and an attack on democracy, leading the E.U. to review Cambodia’s duty-free access to its markets. The court summonses against the 36 former opposition politicians in Battambang — part of more than 140 ex-CNRP members now targeted by local authorities countrywide in recent weeks — have also been condemned as a “systematic misuse of the law” by civil society groups and ridiculed elsewhere.

Hun Sen, however, said he was poised to cut down the vine of civic unease that had begun to wind itself around the central stalk of num banh chok.

He would not allow a rebel movement to form around politicized num banh chok, Hun Sen said.

“This is not a thorn to remove a thorn, but an ax to break [it] down.”

The rumors were that June 9 had been designated by opposition activists as a day of mobilization — a defiant display of num banh chok eating, Hun Sen said.

His ax would not stop swinging at only num banh chok, he added. Whether the chosen food was grilled chewy rice balls — garnished with green onions — or crispy savory yellow pancakes eaten with fish sauce and peanuts, his ruling party apparatus would devour the attempted provocation.

Chanpeou Rozeth, the noodle restaurateur and former commune councilor at the center of the controversy, said she had nothing to do with the rumored June 9 day of num banh chok, though she had seen some comments online among CNRP supporters.

She was now just “an ordinary seller,” she said. She had seen a drop in business since the court actions; having lunch at her shop had apparently become grounds for being summoned for questioning, she noted.

“For me, I absolutely support the announcement of eating num banh chok as a step toward national reconciliation,” Chanpeou Rozeth said. “As Samdech said, I believe his plan will reduce the fear among my other customers who want to come and eat.”

She hoped the thorn of politics would be removed from the Khmer noodle dish. The right to num banh chok, she added, was for all people.

“Why shouldn’t I be able to sell? Why shouldn’t ordinary people, not just former [CNRP] or ruling party supporters, or civil society, be able to come and eat?” she asked. “Why can’t my place welcome former CNRP members, why can’t we talk or have discussions as brothers and sisters?”

Former members of the political opposition should not be excluded from the basic, everyday activity, she said.

“I think it is the people’s right — not only for people in a given party.”