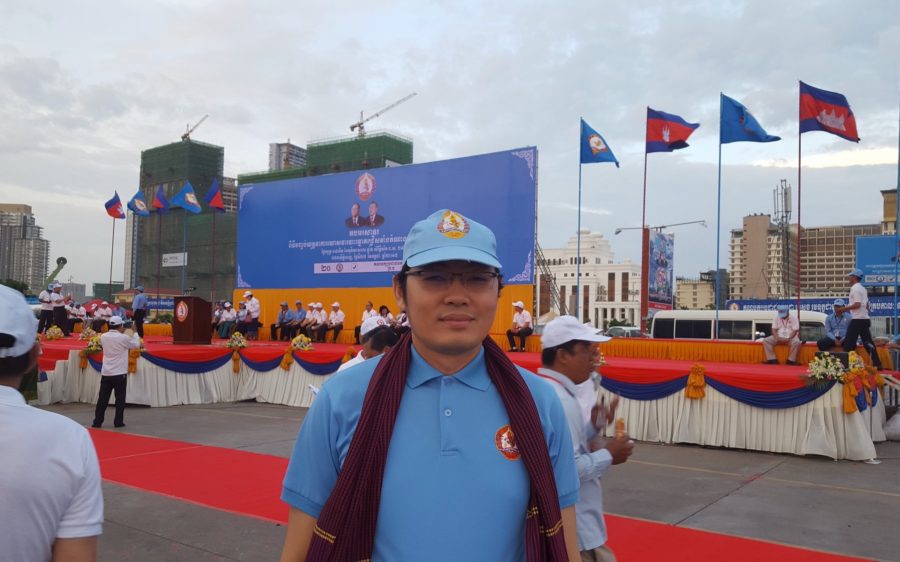 CPP official Kong Kheang at a party rally in a photo posted to his Facebook page in July 2018.

A ruling party official started a live stream as police approached his locked front gate. He narrated over the video that he and the officers in civilian clothes could not reach an understanding.

“In this case, the one who tied the knot is Mr. Deputy Prime Minister Chea Sophara — it is not the brothers who have come to meet me. The one who tied it, he must untie it,” Kong Kheang said as he described officers trying to cut through the lock on his gate.

Kheang was arrested on Wednesday, sent to the National Police and then to the court, where he was charged with incitement and defamation, Sam Onn said.

“I have met with him. His health has changed because he has never experienced an issue like this and he was in shock. He regretted that what he said might have crossed the line,” the lawyer said.

In one of two videos, Kheang says a woman came to him crying and suicidal seeking his help. The woman and her daughter had come from Kampong Thom province to Phnom Penh with no money, and “luckily” met the minister, Kheang says.

Sophara lavished them with gifts, including a car and two houses, he says. He then says the woman had alleged that Sophara committed sexual crimes against her and her daughter.

“With women, the high-ranking and powerful hurt them however they want. My chest is heavy, and I am so sick and tired of it, and I must force myself to make this video,” Kheang says. “Whatever happens, I will not save his face, and I must show his face to the public.”

In a second video, Kheang alleges that Sophara was having an affair with another woman who inappropriately collected money from ruling party members.

“With the position of land management minister, he controls land in the whole country and whether this person needs to build an illegal building or legal building, lake, canal, stream or sea, whether we need to fill it up or not, or whether an island needs to be developed,” Kheang says.

Sophara hung up on a reporter on Friday.

Kheang said in his live broadcast as he faced imminent arrest that Prime Minister Hun Sen must be unaware of Sophara’s alleged actions. “I believe that samdech techo has not known about this issue. If he knew, he would not let you come do this.”