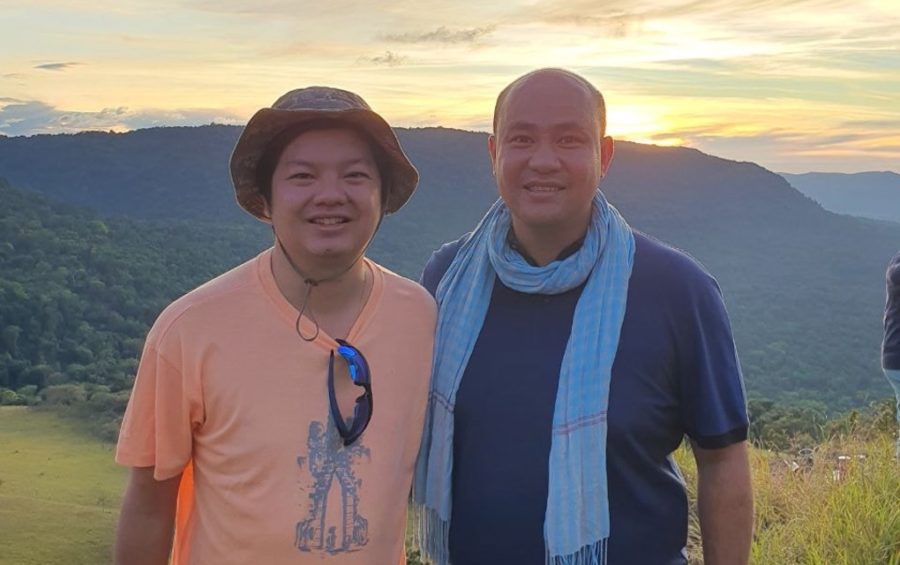 Sok Sangvar, who became undersecretary of state at the Tourism Ministry in December 2020 (left), with CPP lawmaker and son of Prime Minister Hun Sen, Hun Many, in a photograph posted to Sangvar’s Facebook page on December 20, 2020.

Ruling party spokesmen say succession by CPP progeny is underway, based on merit, with the announcement of promotions for three sons of late deputy prime minister Sok An.

An, who died in 2017, was one of Cambodia’s most powerful politicians, compared to a many-armed Hindu god for having his hand in myriad government functions, and was considered Prime Minister Hun Sen’s right-hand man.

In three separate royal decrees last week, his sons Sok Sokan, Sok Soken and Sok Sangvar were made secretaries of state at the ministries of land management and foreign affairs and undersecretary of state at the Tourism Ministry, respectively. The decrees, signed by the king, were all made at the request of Hun Sen.

“This kind of succession is the most important thing, because as individual officials reach their 70s we prepare a successor,” said government spokesman Phay Siphan.

CPP spokesman Sok Eysan said it was a step in the party handing power to a new generation. “Building up the youth who are bamboo shoots is preparation for succession,” Eysan said, with the same phrase he used to explain Hun Sen’s son, Hun Manet, filling in for the prime minister at a ceremony in September.

Both spokesmen said the promotions were grounded in merit. Siphan said the three brothers “are not round potatoes” and have excellent educational and work qualifications, and “their family has served the nation.”

Eysan also underscored the three brothers’ qualifications and added: “How could we take someone that we can’t trust?”

“This is the transfer of power to the next generation in the CPP party,” Sary said. The positions given to the new generation mirror the power their fathers held, he said.

“They transfer power through their father’s past work in the government. … For example, if they are the sons of the deputy prime minister, they will be promoted to be minister or secretary of state,” he said.

Sokan, a National Assembly lawmaker, has studied at the U.S.’s Columbia University, Singapore’s Lee Kuan Yew School of Public Policy and the University of Melbourne. Soken has worked in the ministries of foreign affairs and commerce, and studied in Australia, the U.S., Singapore and China. Sangvar has been deputy director-general at the Apsara Authority for seven years.

On Friday, a royal decree also named Ban Sreymom as Pailin province’s new governor. Sreymom, a National Assembly lawmaker, is the wife of Y Chhean, a former bodyguard of Khmer Rouge leader Pol Pot who continued to wage war for the regime in Pailin after its fall in 1979.