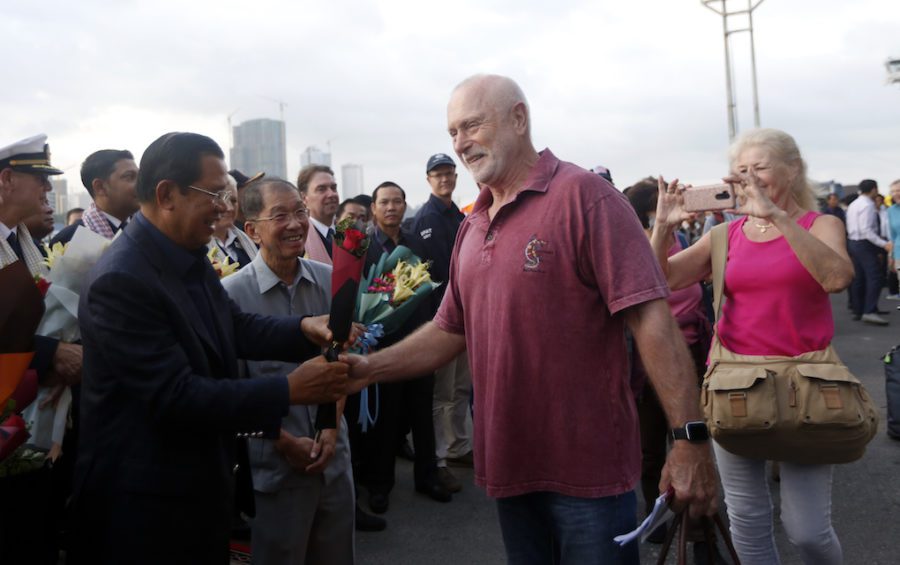 UPDATED 10:09 a.m. — Nearly 1,000 people remaining aboard a cruise ship docked in Sihanoukville will be tested for the novel coronavirus, after more than 1,200 disembarked last week, including a woman who tested positive for the virus in Malaysia, an official said.

Some 233 passengers and 747 crew members remained on board the Holland America Line’s Westerdam, Kheang Phearum, spokesman for the Preah Sihanouk provincial hall, said on Monday.

“The remaining passenger[s] and crew member[s] will be tested for novel coronavirus,” or Sars-CoV-2, beginning on Tuesday, Phearum said in a message.

Health Ministry officials did not answer questions from VOD about whether disembarked passengers staying in Phnom Penh would be tested or quarantined, following the revelation that an 83-year-old American woman who left the ship on Friday had tested positive for the virus after flying to Malaysia.

Ministry spokeswoman Or Vandine said the ministry was working with the World Health Organization (WHO) after Malaysia confirmed two positive test results for the U.S. citizen over the weekend. Vandine declined to answer further questions.

WHO’s Cambodia office did not respond to an emailed request for comment as of Monday evening.

Phnom Penh City Hall spokesman Met Measpheakdey said about 200 passengers from the ship were staying in the Sokha hotel in Phnom Penh and would be taken around the city on bus tours. He declined to answer further questions.

Prime Minister Hun Sen on Friday greeted disembarking passengers at the Sihanoukville port, tying his decision to let the luxury cruise ship dock in Cambodia to the nation’s commitment to human rights — just days after the E.U. partially suspended trade benefits over rights violations by Cambodia.

The cruise ship docked in Sihanoukville on Thursday after several Asian nations denied it access to their ports due to fears that people aboard were infected with the new viral strain.

At least 50,000 infections and 1,600 deaths have been confirmed globally, the majority in mainland China, where the virus was first detected in late December.

It has spread to 25 nations, including at least 34 reported cases in Thailand, 16 in Vietnam and one in Cambodia, according to WHO.

Holland America said in a statement that the passenger who tested positive in Malaysia started feeling ill at an airport in Kuala Lumpur and had not visited the ship’s medical center to report any symptoms while on board.

Twenty other passengers who had visited the medical center on board had tested negative for the virus last week, the cruise line said.

Holland America’s chief medical officer Dr. Grant Tarling said in the statement that health experts were “working with the appropriate national health authorities to investigate and follow-up with individuals who may have come in contact with the guest.”

Meanwhile, one passenger who had disembarked and was saying in a Phnom Penh hotel expressed regret on Twitter on Monday for having left the hotel on Saturday before she knew a fellow Westerdam passenger had tested positive for the virus.

“I left the hotel for a few hours on Saturday before I knew the extent of our situation,” Christina Kerby said. “I deeply regret if I’ve inadvertently put anyone at risk.”

On Sunday, after Malayasian officials had confirmed the passenger’s positive test result, Kerby said in a post that she and other Westerdam passengers at the hotel had been “swabbed for COVID-19,” the name of the new disease, and had been asked by the Health Ministry to stay in their rooms.

UPDATED 10:09 a.m. — Holland America Line said in a statement Monday evening that some 255 passengers and 747 crew members remaining aboard the docked Westerdam would be tested for COVID-19 before being cleared to disembark over several days.

All disembarked passengers staying at a Phnom Penh hotel had been screened for the virus, the cruse line said.

“Results are being returned when completed, with the first batch of 406 all being negative. Cleared guests may travel home, and arrangements are being made for those guests,” the statement said.

Additional reporting by So JayaUdom and Vann Vichar