Cruise Ship Cast Out Over Virus Fears Docks at Sihanoukville 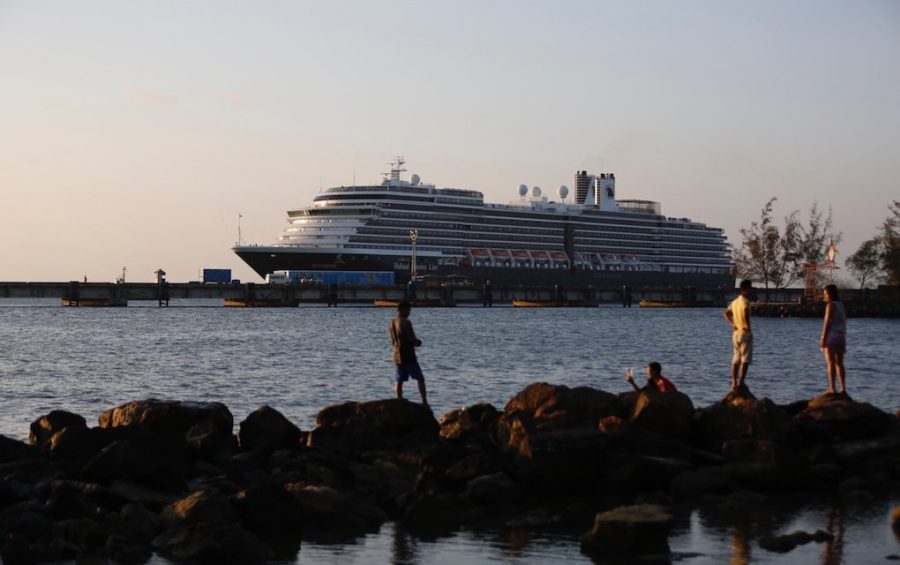 UPDATED 10:50 p.m. — A luxury cruise ship that was turned away by other Asian nations due to fears of coronavirus docked at Cambodia’s Sihanoukville port Thursday evening, with passengers required to undergo health checks before they can disembark, officials said.

Holland America Line’s Westerdam made port at about 6 p.m. on Thursday with more than 2,000 people aboard, after waiting about 2.5 km off the coast for much of the day, said Lou Kimchhun, director of Sihanoukville Autonomous Port.

Authorities were checking the temperatures of passengers and crew on the ship, and after docking, Cambodian officials were waiting to meet the ship’s captain and two other officers, Kimchhun said.

Health Ministry spokeswoman Or Vandine told VOD late Thursday that 20 people aboard the ship who were suspected of having contracted novel coronavirus (Sars-CoV-2) did not have the disease.

The cruise line on Wednesday said there were no known or suspected cases of the new viral strain.

Passengers would not be allowed to leave the ship until they were checked by medical professionals and confirmed to show no symptoms of novel coronavirus, Preah Sihanouk provincial spokesman Kheang Phearum told VOD in a message earlier Thursday.

“The purpose of the dock is not [for passengers] to travel, but to transfer some of the passengers to the airport and return home,” Phearum said.

#Westerdam passengers strolling on the deck as we move into port at Sihanoukville. Feeling rebellious tonight so I’m wearing sneakers in the dining room. pic.twitter.com/oIirblcE9U

Holland America said in a statement on Wednesday that the Westerdam cruise would end in Sihanoukville with the ship remaining in port for several days for disembarkation.

The Westerdam departed for a 14-day cruise from Hong Kong on February 1 with 1,455 guests and 802 crew on board, the cruise line said. It had been scheduled to end in Yokohama, Japan on Saturday.

Thailand, Japan, the Philippines and Taiwan have all refused to allow the ship to dock due to concerns it could be carrying passengers or crew infected with the novel coronavirus.

The virus has spread to more than 20 nations, with more than 60,000 confirmed infections and more than 1,300 deaths, mostly in China where the strain was first detected, according to data from the U.S., E.U., China and World Health Organization (WHO) compiled by Johns Hopkins University, as of Thursday evening.

Cambodia’s only patient confirmed to have contracted the virus was allowed to leave hospital quarantine on Monday after he tested negative.

WHO director-general Tedros Adhanom Ghebreyesus thanked the Cambodian government and Prime Minister Hun Sen for “clearing the way” for the Westerdam to dock at Sihanoukville.

“This is a welcome act of solidarity at a time when the world has a window of opportunity” to stop the virus and avoid stigma and fear, the WHO chief said in a post on Twitter.

Hun Sen told government-aligned outlet Fresh News that fear, not the virus was the “real disease.”

“We must contribute to humanitarian affairs in times of emergency,” he said. “If no one allows entry, Cambodia does.”

Dining room on board the #Westerdam pic.twitter.com/Eg9VG75CUQ

Westerdam passenger Lorraine Oliveira said in a message that Holland America had reassured passengers that no one on board had symptoms of coronavirus.

The ship’s staff had implemented health precautions, including temperature checks, increased sanitizing and visible cleaning, said Oliveira, who lives in the U.K. and is on holiday with her husband and two children.

Asked about her favorite part of the vacation, she said her family enjoyed their day off the ship in Taiwan on February 4.

“Even though we’ve not been off ship since then it’s not been bad at all on board,” she added.

Another passenger, Christina Kerby, said on Twitter that the ship’s captain relayed to passengers on Thursday that the clearance process was going well, but taking longer than expected.

“People seem relieved to have time for more swimming and ice cream onboard,” she wrote. “I’ve never seen the Lido pool so crowded.”

Inspection and clearance procedures are proceeding. Given the number of organizations involved in supporting today’s complex operations, it is taking time. We are grateful to everyone in Cambodia who are helping and welcoming us.

Updated at 10:50 p.m. with comments from Health Ministry spokeswoman Or Vandine and a tweet from Holland America Line.