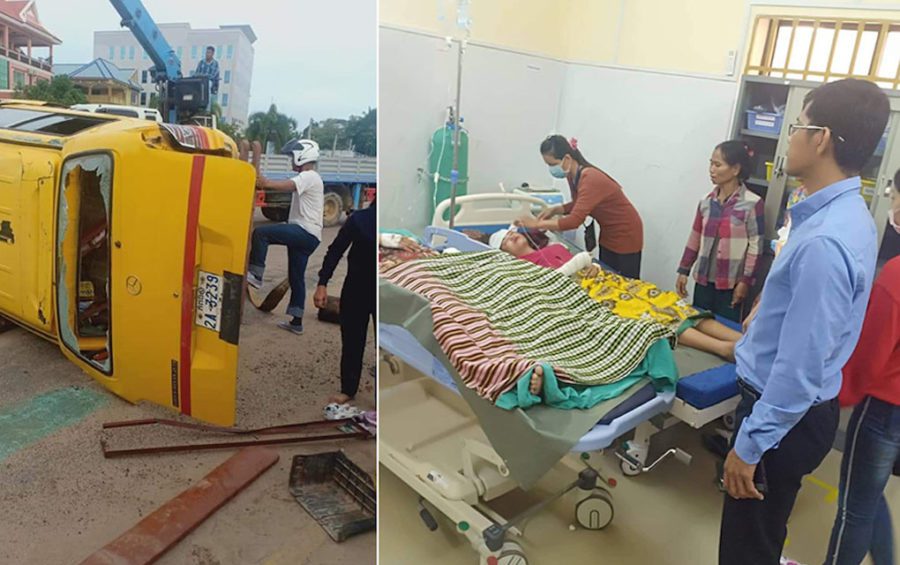 Forty-three people were injured when a van struck another vehicle in Svay Rieng City on July 31; some of the injured were sent to the Svay Rieng Provincial Referral Hospital. (Collective Union of Movement of Workers’ Facebook page)

Two died and about 30 were injured when a truck carrying factory workers tipped over in Svay Rieng’s Svay Teap district on Tuesday. In Svay Rieng City the following day, a van full of workers struck another vehicle, injuring 43 people.

The danger of garment factory workers’ commutes has long plagued the sector, with workers typically squeezed into cages built onto the backs of trucks.

Ath Thorn, president of the Cambodian Labor Confederation (CLC), said one urgently needed reform was to make sure that all truck drivers were licensed.

“The police should follow and inspect all of those drivers,” Thorn said. “Those who have no driving license and have not gone through driving school should not be allowed to drive.”

Better signage on the roads would also improve safety, and homemade vehicles should be banned, he added.

“Homemade trucks or vehicles that fail to meet technical standards should not be allowed to drive on the streets,” he said.

Kong Ratanak, deputy director of the Institute for Road Safety, noted that apart from the risk to lives, traffic accidents also cost people and the state a lot of money.

It was in everyone’s interest to follow traffic regulations more closely, he said.

“The government has to play a part in taking responsibility, by strengthening law enforcement and urging people to follow the law,” Ratanak said.

“It’s the same for people. They have to play their part and respect the law, think about their safety and avoid taking risks,” he said.

Ratanak added that factory workers should try to be scrupulous before riding on the backs of poorly maintained trucks.

“Garment workers have to know how to choose their means of travel,” he said. “If you see a vehicle lacking technically and in terms of safety, they should not travel on it. They should find other, safer trucks.”

Transport Ministry spokesman Vasim Sorya agreed with the suggestions put forward by the union leader and traffic expert, but said the government was already on the case.

“The ministry has already prepared measures to be followed by municipal and provincial departments,” Sorya said.

Officers in the police, military police, local authorities and Transport Ministry were all being trained to improve traffic law enforcement, he said.

In the first six months of the year, factory workers were involved in 766 traffic accidents leading to 24 deaths and 944 injuries, according to the National Social Security Fund.

Overall, 1,033 people died and 3,224 were injured in traffic accidents during the same six months, according to the Interior Ministry. Interior Minister Sar Kheng said while announcing the figures that traffic deaths had reached emergency levels and ordered urgent action.