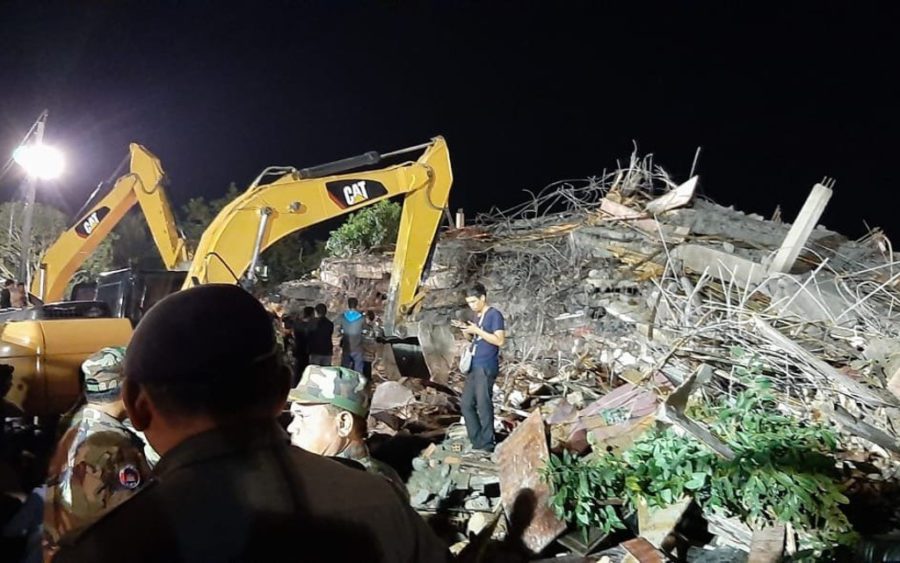 The site of a building collapse in Kep during the night of January 3, 2020. (Pov Meta/VOD)

The number of people killed in the collapse of a seven-story building under construction in Kep reached seven by Saturday morning, according to the police.

According to a report by the National Police published Saturday, seven people died and 18 others survived.

The Building and Woodworkers Trade Union Federation of Cambodia (BWTUC) on Saturday asked for the owners of the building and the company to be held responsible. “BWTUC would like to appeal to authorities to please … take strict actions against the company and construction site owners, and have them take responsibility for the incident in accordance with the law.”

BWTUC also called for increased regulation of the construction sector to ensure the health and safety of workers.

In June, at least 28 people were killed and 26 others injured after an under-construction, seven-story building in Sihanoukville collapsed on top of them.

Government-aligned website Fresh News reported that a Cambodian couple, believed to be the owners of the building, are currently being questioned by police in Kep.

In December, an under-construction dining hall at a temple in Siem Reap collapsed, leaving two dead and 10 seriously injured. On Wednesday, a man died after falling off a 11-storey building under construction, according to the Phnom Penh Post.