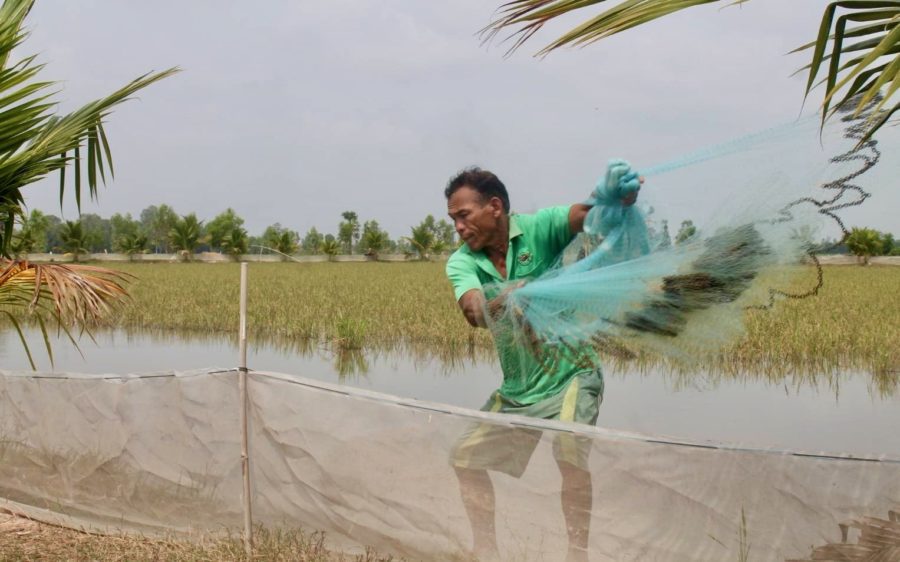 KOH ANDET, Takeo — After just a year of raising lobsters in a state-subsidized program, Om Vorn wants to go back to fish.

Takeo lobsters, noted for their taste, are being considered for official recognition as a regional specialty by the Commerce Ministry, leading to a program to support new lobster farmers with larvae, feed and technical assistance.

Vorn was selected to the program early last year and raised 15,000 lobsters in his farm’s pond. The work was labor and water intensive, Vorn said, and required changing the pond’s water at least once a month — preferably twice. His farm doesn’t have enough access to water, he said.

But the bigger problem has been selling the lobsters.

“There’s hardly ever anybody to buy them. If someone buys them, it isn’t wholesale buyers. At my farm, there are only retail buyers, and in one day I sell 2 to 3 kilograms,” Vorn said. “Most wholesale buyers decide to buy from Vietnam more than our lobsters because they are cheaper. They forget that our lobsters have a more special taste.”

The fish he used to farm prior to lobsters were cheaper in price but made him more money, he said.

San Savorng, in Borei Cholsar district, has been farming lobsters for almost two years. He plans to stick with it, but is facing the same challenges.

Lobsters take six to seven months to raise, and can be costly even with the state’s help, Savorng said.

“You can’t just put them in and walk away,” he said. “We need to look after them and give them enough food regularly” and frequently change their water.

More than that, buyers are always asking him to lower his prices, Savorng said.

“It’s very difficult when wholesale buyers compare our local lobsters to lobster imports,” he said. “[They] spend less time and less money to raise and harvest them, but my lobsters need more time to look after. … I can’t sell at the same price.”

At Phnom Penh markets on Thursday, Takeo lobsters could not be found. At Central Market, or Phsar Thmei, lobster seller Sou Gech said she hadn’t had a shipment of Takeo lobster for four days. There was no timely supply and it was less profitable due to higher prices, Gech said.

Instead, most of her lobsters were from Prey Veng province’s Neak Loeung city, she said.

A Boeng Keng Kang seafood seller, who declined to be named, said he only knew of Takeo lobsters from social media and had never bought or sold them.

“I used to hear about it, but I never bought it because it was too expensive,” the seller said. Only big restaurants are likely to be able to afford Takeo lobsters, he said.

Som Mara, a lobster wholesaler, said Takeo lobsters look the same as imports, and though he believes they taste better, it’s hard for consumers to see the difference in the market.

Takeo’s Fisheries Administration deputy director Ouk Hak said seven lobster farms were currently receiving subsidies. They get larvae and feed during the first year but only technical help in the second, he said.

He acknowledged the difficulties competing against imports and other producers, but said special branding was being developed and he believed it was still a good opportunity for farmers with large ponds.

Commerce Ministry spokesperson Seang Thai said the development of an association and accreditation process for Takeo lobsters was still ongoing, and they would work to increase prices and consumer confidence.

Hab Sarun, in Traing district, said he was happy with his first year of lobster farming despite the work and challenges. His pond was more than 1 hectare, and had some crops as well as the lobsters, he said.

He had about 10,000 lobsters, and he sold them around his village, Sarun said. For now, however, the scale of the business remained small and local. “It is hardly ever to wholesale buyers,” he said.