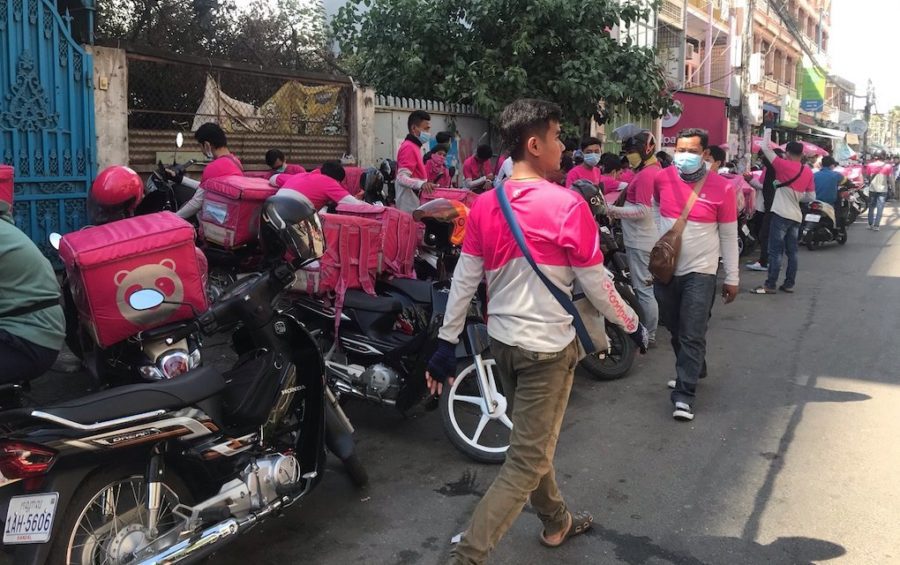 Nearly 300 Foodpanda drivers protested in front of the company’s offices on Monday, saying their delivery fees had dropped without notice, while the company blamed a “technical issue” and “recent revision” to their rider payment scheme for the dispute.

“Look at this one — it gives us 0 cents,” said driver Dim Ratana, showing a reporter a screenshot of a short delivery of about 200 meters.

“Our motorbikes consume gasoline, not water. It’s like we are working for free for them,” Ratana said.

According to protesters, delivery fees have been falling over the past year, with the latest cut apparently coming into effect around late December. A squeeze has been seen across the industry as intense competition followed a delivery boom amid peak Covid-19 closures.

“In short, they’re trying to bake a cake without flour. They’re eating a lot,” he said. “We take the risk of possible accidents, pay for the gasoline, and risk our health in the rain.”

A Foodpanda spokesperson said in an email that management was in talks with the riders and working to fix a technical payment issue affecting some drivers.

“Due to a technical issue affecting fee calculations, a small number of riders had received less fees than they should,” the spokesperson said. “We are working to fix the technical problem and will ensure that affected riders are paid properly.”

The company added that drivers had voiced concerns about a “recent revision in our rider payment structure.”

“Rider payment structure is dynamic and updated regularly to reflect current demand and supply status, with a lot of careful consideration,” it said. “In the past year since we started operating in Cambodia, foodpanda has always provided fair compensation to our riders, so they can continue to earn a living in a flexible way.”

Meanwhile, another protester, Chan Sina, said trips of 6 to 7 km used to earn him $1.36, but the fee for the same distance had recently dropped to $0.86.

“They take advantage of us. How can we accept it? We request that the company provide a price list so we can know,” Sina said.

Another worker asked not to be named because he feared Foodpanda would cut his “score” used in assigning work and giving bonuses.

“Our lives are on the road, and they give us such a price,” the driver said. “It’s very difficult to accept.”

Labor concerns over delivery services have been common both in Cambodia and internationally, including lawsuits in the U.S. over the status of drivers as “independent contractors.”