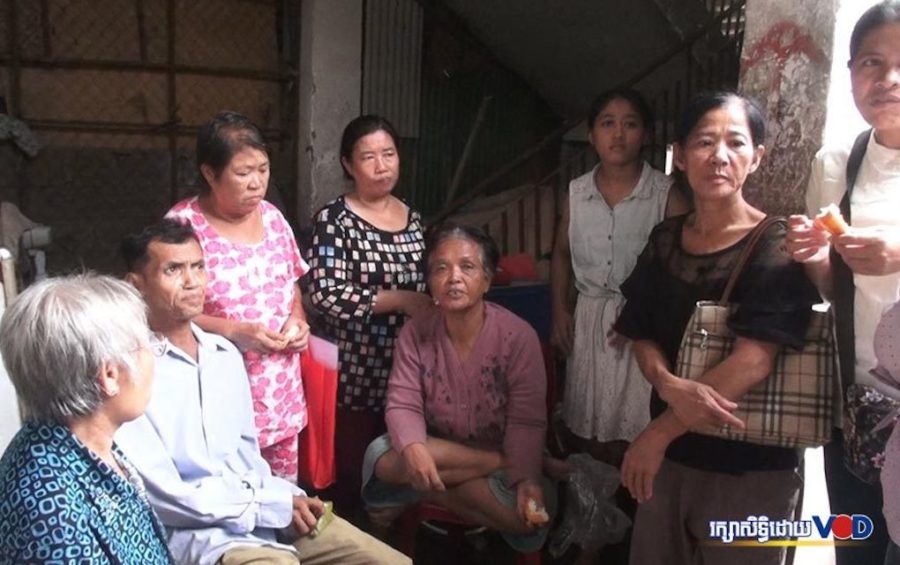 Borei Keila residents stand in the stairwell that has become their new home, on September 18, 2019. (Hy Chhay/VOD)

Twelve Borei Keila families have moved into the stairwell of an adjacent building following the demolition of their dilapidated apartment block by city authorities on Monday.

The families, totaling more than 50 residents, said they had each been offered either $5,000 or a small house in Andoung village, on the outskirts of Phnom Penh, as compensation for the demolition, but refused to move away from the central neighborhood to a remote area that lacks work opportunities.

Soam Somaly, one of the residents, said on Wednesday that the families had nothing — no rice, bowls or pots — because they had been dragged away by authorities on the day of the demolition.

“We were all standing in the old building, staying in the room and locking the door, refusing to leave. We would have rather died than not have a house for our children in the coming days. But they came in like robbers,” Somaly said. “The forces broke down the doors and locks and dragged people down the stairs like robbers.”

They did not have the chance to take any of their belongings with them, she said.

“We have only a pair of tight trousers and a torn skirt,” Somaly said.

Another resident, Touch Chanda, said the families simply did not have the money to rent a house.

“We don’t have the ability. [So] we cleaned up this place to stay,” Chanda said.

The families have placed wooden boards under the stairs on which to sleep.

The building they chose is the fourth in a line of eight buildings constructed by tycoon Suy Sophan’s Phan Imex, which in 2012 demolished hundreds of homes that housed 1,776 families to make way for a development project.

The company promised to build 10 apartment buildings to house the displaced residents, but halted construction after eight were built, claiming bankruptcy and leaving about 300 families in the lurch. Some accepted housing at resettlement sites in the city’s outskirts, while others moved into the nearby abandoned building that was destroyed on Monday.

According to a City Hall letter dated August 1, 14 families remained to be relocated or compensated.

Phen Ry, chief of Dop Pi village in Veal Vong commune, said he had no information about the more than 50 people living under apartment building stairs in his community.

He said he would look into the issue, but added that a resolution would be up to City Hall.

Phork Sophin, another Borei Keila resident, told VOD that the municipality had offered $5,000 or a house in Andoung village, but the offered sum would not allow her to purchase a home in Borei Keila.

Andoung was far from schools, work opportunities and had poor water and electricity services, she said.

Many of the residents currently earn a small living washing clothes, scavenging through rubbish piles or selling cakes, they said.

Phnom Penh governor Khuong Sreng said the city was not obliged to give compensation.

“I have nothing to say because they are not in a condition that requires us to give compensation. Ask Excellency Mean Chanyada. He will explain this,” Sreng said, referring to the deputy governor. Chanyada declined to comment and referred questions to City Hall spokesman Met Measpheakdey, who could not be reached.

During the demolition on Monday, 12 people were held at the district office for most of the day. One of those held, Nhem Sreynich, told VOD from the district hall on Monday that the authorities appeared to be concerned a protest would get in the way of the demolition.

Six others were sent to the notorious Phnom Penh Social Affairs Center, better known as Prey Speu, where vagrants, drug users and the mentally ill are detained.

The six were released from Prey Speu on Wednesday, according to Sophin, the Borei Keila resident.

“We’ve asked the Phnom Penh municipality to continue to look for a solution even though their building was destroyed. We still have the opportunity to find a solution for the remaining families,” Sophat said.