Despite Official Resolution, New Arrests Made in Long-Running Land Conflict 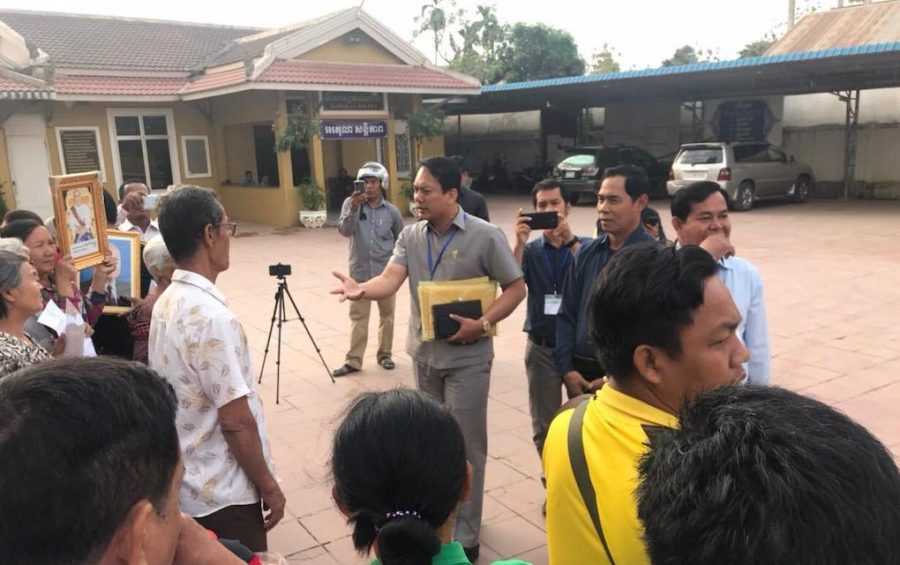 Chan Yet, president of the Nokor Democracy Party and former member of the Supreme Consultative Council, (right, in black) in a photograph posted to the party’s Facebook page on February 25, 2020.

Five representatives of a community embroiled in a Banteay Meanchey land dispute have been charged and placed in pretrial detention for incitement charges, according to a court official and a rights group.

The five, who range in age from 50 to 71 years, were party to some part of a long-running and overlapping land disputes in the Boeung Chungruk village of Tuol Pongro commune, though their connections to the disputes are still unclear.

“The arrests of the people were conducted by the provincial level and we do not know much about these issues,” Vor Rith told VOD.

Though the court said five people had been arrested, a Monday post on the Banteay Meanchey provincial police Facebook page stated a different number, that four suspects were arrested by provincial officers working with Malai district forces. These arrests were made for allegations of collecting fake fingerprints to petition against a land settlement in Toul Pongro commune, the post stated.

Nou Chivion, a deputy provincial police chief, said he had led the force to arrest the suspects. He said the group stands accused of inciting residents to protest against authorities and a land dispute resolution team, which Chivion said had already handled the issue and divided land to villagers.

Though the disputes in the village grew more complicated over time, they appear to have started with a land settlement reportedly given to disabled veterans by Prime Minister Hun Sen in 1997. However, community representatives said in 2014 the land had been sold off without their permission by their former commanders, Mao Kiri, Preap Sarun and Ly Utny.

In the time since, the dispute grew to include unrelated claimants who said they had been defrauded in Malai district land sales from brokers who allegedly sold property claimed by Ly Utny. This dispute included a total of more than 1,200 families and prompted Hun Sen to assign his deputy cabinet chief Pankhem Bunthan to address the conflict. Bunthan’s working group eventually introduced a land plot “lottery” for residents that ended this week.

Before this apparent resolution, the conflicts in the village had attracted high-profile attention in recent years and had been the subject of some political interest.

In 2020, Chan Yet, president of the minor Nokor Democracy Party, was removed from the prime minister’s Supreme Consultative Council by a royal decree after going to Malai to investigate the dispute. Yet said after his removal he had gone to the district after receiving a complaint from about 230 families saying they were facing eviction.

Licadho provincial coordinator Phun Chhin said that even before this week’s arrests, police had intervened in 2020, when Yet was expelled from the political consultation group.

Chhin also said authorities were conflating the different conflicts in the village when they said the issues there had already been solved.

“Arresting people for protesting to find a solution, the authorities should not use a heavy-headed approach like this,” he added. “[They] should let them talk and find a solution with each other.”