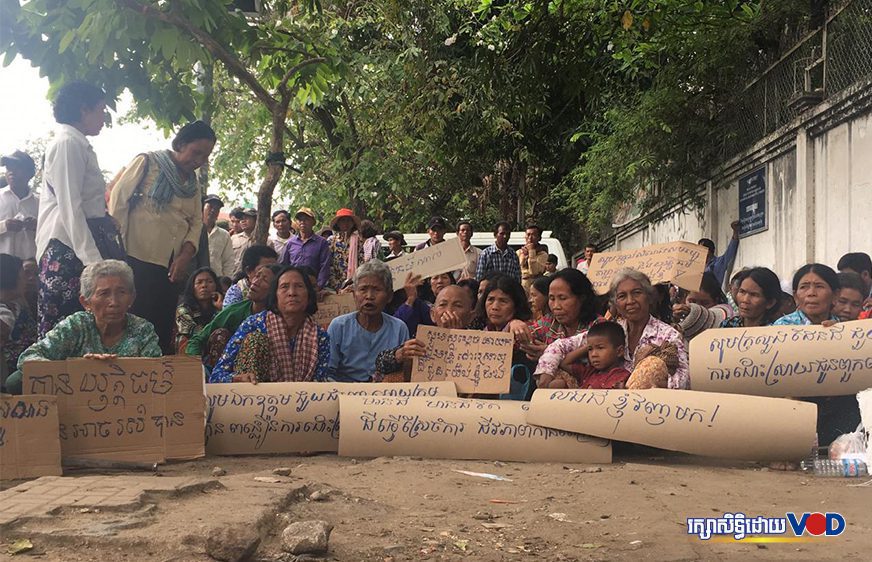 Almost 700 villagers from Kompong Speu province protested outside the Land Management Ministry on Thursday to demand more than the $500 in compensation they were offered for losing several hectares of land each to a ruling party senator’s sugarcane plantation.

The villagers from Oral and Thpong districts submitted a petition with 694 signatures to the ministry asking it to find a new resolution. The group have been pushing for a settlement since being dispossessed by CPP Senator Ly Yong Phat’s Phnom Penh Sugar plantation and his business associate Kim Heang’s neighboring Kampong Speu Sugar in 2010.

Seung Sokhom, a representative for the families from Oral, said ministry officials visited the site last year and offered between $300 and $500 for each family but were rebuffed.

On Tuesday, district authorities had contacted the families raising the offer to $500 for all families, he added, with the offer appearing to be presented as an ultimatum.

“We cannot accept the amount of $500. People owned land ranging from 2 to 3 hectares to some owning 7 to 8 hectares,” Sokhom said. “They worded the offer such that if we don’t accept it, we will get nothing and there will be no more proposals.”

Another villager, Khat Khorn, said the families were seeking $500 for each hectare seized.

“Each family owned several hectares,” Khorn said. “They offered only $300 to $500. How can we accept it? We did not accept because the compensation is inappropriate and unjust.”

Following Thursday’s protest, a ministry official invited seven representatives to discuss the case. Sokhom said the head of the ministry’s Land Dispute Resolution Committee promised a new proposal would be made after the Khmer New Year with input from civil society.

Spokespeople for the Land Ministry could not be reached for comment.

Nhel Pheap, coordinator of the Coalition of Cambodian Farmer Communities, urged the ministry to intervene to provide adequate compensation to the villagers.

“If there is no proper compensation, and the proposal is still below $1,000 per family, by failing to account for the hectares of land, it won’t be possible,” Pheap said. “People cannot accept it because considering their expenses over the nine years starting from 2010, and considering their expenses traveling to [protest at] important state institutions, they are left with nothing.”

About 500 people from Koh Kong province are also locked in a dispute with the CPP senator and last month protested at the Land Ministry seeking resolution to the 13-year-old issue.