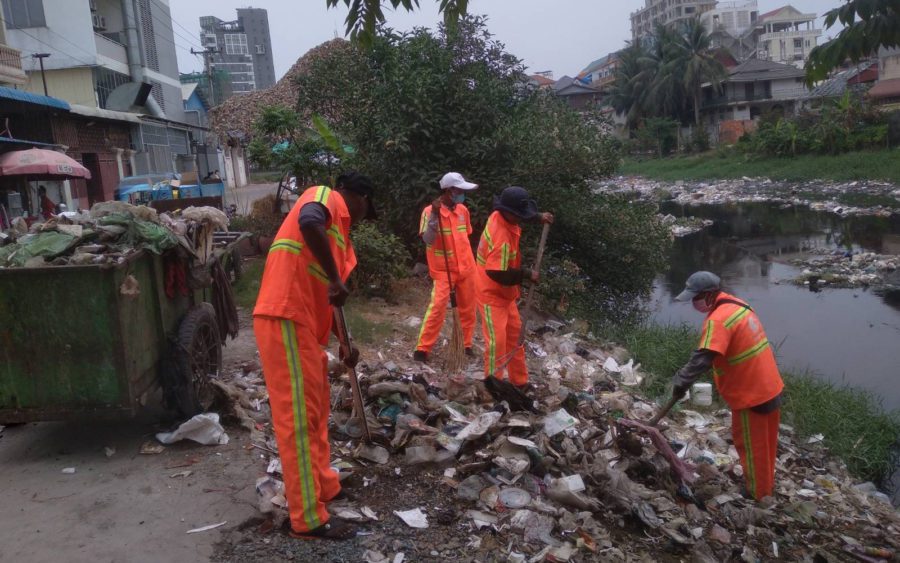 In early March, environmental activists, including those from Mother Nature, submitted petitions to three districts in the capital spotlighting seven locations where garbage had filled up canals crisscrossing the city.

VOD reporters have seen local officials clean up at least two of the locations in Meanchey and Chamkarmon districts in the last few days, with significant improvements seen in these two areas.

Phuon Keoreaksmey, an environmentalist involved in the campaign, said that about 70 percent of the trash in Chamkarmon’s Boeng Trabek canal had been cleaned, while other areas in Meanchey were still being cleaned and little had been done in Russei Keo.

She said it was encouraging that district officials were cleaning the trash but it would be better to put in place clear garbage disposal regulations to prevent another buildup of trash.

“I support the measure, however, please continue this activity regularly,” she said.

Chamkarmon district governor Theng Sophal said the cleaning operations had started 10 days ago and they hoped to improve the flow of water in the Boeung Trabek canal.

He welcomed the help from the environmentalists but said officials were already working on cleaning up the canals.

“For the garbage project, our team had the plans before the youth [petitioned] but our authorities were waiting for the cooperation of all parties involved,” he said.

Chea Rithy, a 37-year-old resident of the area, was pleased with the improvements but said the problem would likely reoccur because people were continuing to throw their trash in the canal.

At Meanchey’s Boeung Tompun I commune, an excavator was seen removing trash and silt from a canal near the Stung Meanchey bridge on Friday, and waste disposal workers were sifting through garbage.

Chea Chanphal, head of waste for Cintri in Meanchey district, said workers were cleaning the canal for the past two weeks and had been instructed to continue cleaning the waterway.

“Now the team has the order to collect garbage regularly because the company has a new policy in cooperation with the district,” he said.

But there should be garbage bins in the area and people should responsibly dispose of their trash to avoid a repeat of the canal blockage, he added.

Meanchey district governor Pich Keomony said his officers were now cooperating with commune officials, the department of public works and Cintri to keep the canal clean. He added that while they were cleaning the trash, garbage was still flowing there from other locations.

“The rehabilitation and collection of rubbish is just a short-term preventive procedure, it is not yet effective,” he said.

San Mala, another activist involved with the trash petition, said it was encouraging to see officials take their concerns seriously but that there needed to be a long term solution.

“I think we’re waiting to see if the authorities are really willing to deal with it or if they just set up a trick to eliminate the anger or make the people happy,” he said.