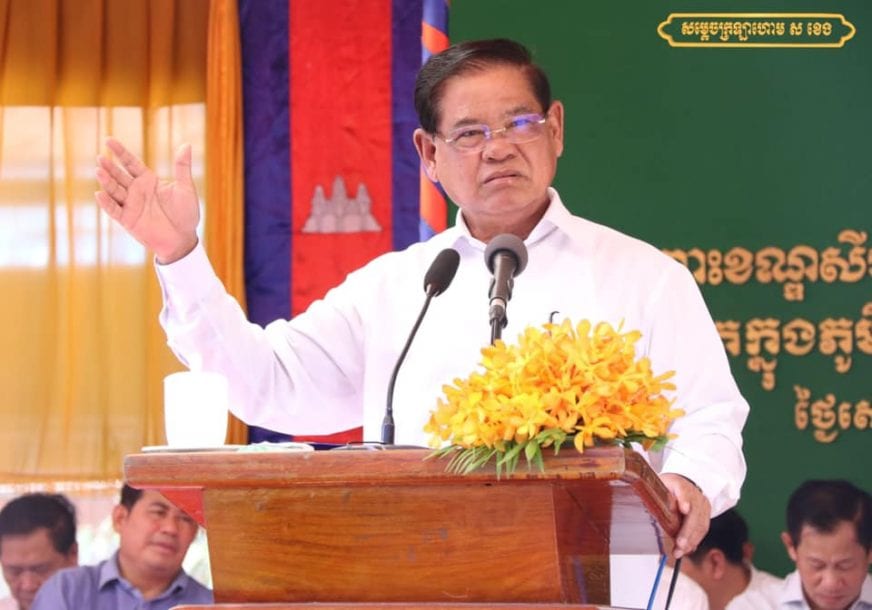 There is no need for demonstrations when people can vote every five years, Interior Minister Sar Kheng said this week.

“Our democracy has a five-year mandate. So when the election comes, let’s go together to vote,” he said.

Kheng’s ruling Cambodian People’s Party (CPP) won all 125 seats in the National Assembly last year after the Supreme Court dissolved the main opposition over accusations that the rival party was trying to overthrow the government.

Alleging collusion with the U.S. in a “color revolutionary” plot, the high court also banned 118 senior officials of the opposition Cambodia National Rescue Party (CNRP) from politics eight months ahead of the national election.

The court ruling was instigated by a complaint from Kheng’s Interior Ministry.

Speaking at the inauguration of a bridge in Battambang province on Wednesday, Kheng said Cambodia had achieved complete peace. People should take advantage of the opportunity to build up businesses, and ignore calls from “a politician” to hold demonstrations against the government, he said in an apparent reference to former opposition leader Sam Rainsy’s frequent Facebook rabble-rousing and ever-deferred promises to return to the country from his exile in Paris.

History had shown that it’s hard to restore stable rule once you bring down a government, Kheng argued.

“It’s not right to gather and topple the government. If we do this, Cambodia will have to go through a reshuffle all over again. If there’s a reshuffling, we don’t know whether we can achieve the same as what we’ve already done,” he said.

Mu Sochua, the outlawed CNRP’s former deputy president, said Kheng clearly missed the point of the Constitution, considering that the opposition was banned, scattered, and merely wanted to return to the country to contest the next election.

Cambodia’s Constitution guaranteed the right to political participation — as well as the right to gather and participate in demonstrations, Sochua said.

“The Cambodian People’s Party shouldn’t be so afraid of us,” she said. “Let people make their own judgement.”

She suggested that there should be a public gathering to receive Rainsy back to the country.

“I would like people who want to see national reconciliation to come together to welcome the repatriation of the president, Sam Rainsy, and we will all find a solution for the nation,” Sochua said.

Korn Savang, monitoring coordinator for elections NGO Committee for Free and Fair Elections in Cambodia, said people were within their rights to put pressure on the government to organize genuine elections.

“All relevant parties should be encouraged,” Savang said.

Last year’s national election was widely condemned, including by the U.S. and E.U., which have moved to potentially sanction Cambodia over the “flawed” vote.