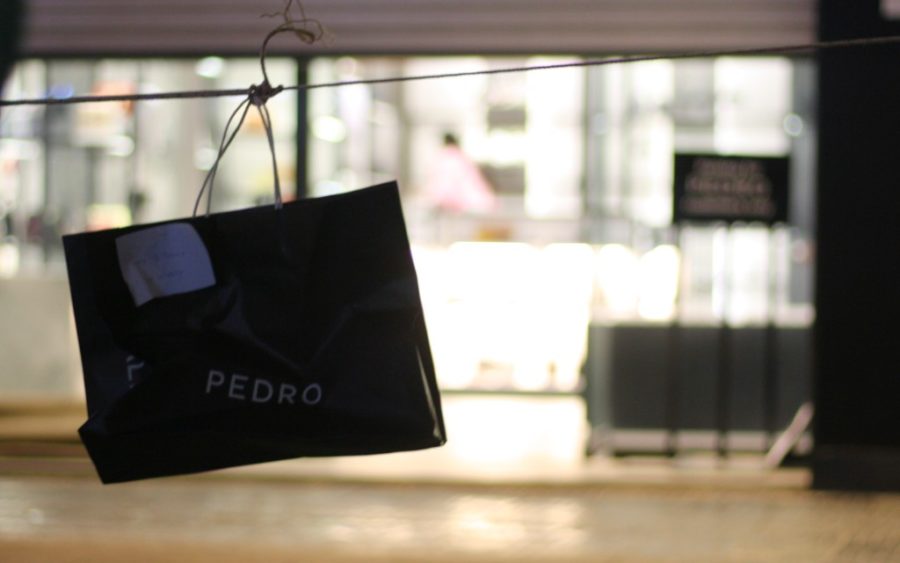 Fashion store Pedro, in Phnom Penh’s Boeng Keng Kang I, was roped off as possible Covid-19 contacts awaited testing on the evening of December 4, 2020. (Michael Dickison/VOD)

The Health Ministry announced one positive test from an employee at the store in the morning. In the late afternoon, the ministry’s department of communicable disease control posted online that six further staff members had tested positive that day.

Around 6 p.m. the store was roped off, with dozens of people gathered wearing masks. One woman, who declined to give her name because she had been asked not to speak to media, said employees at affiliated stores had been asked to come in for a test and to go into home quarantine.

A man, who also said he had been told not to speak, said one of the new cases was his good friend and next-door neighbor. He was contacted by the friend about getting tested at the store at 6:30 p.m., he said.

Police arrived at the scene around 6:15 p.m., and a truck with supplies and Health Ministry “Rapid Response Team” members arrived around 6:20 p.m.

About 25 people were gathered in the roped off area of the shop, while another dozen waited on steps outside.

The cases are part of a local Covid-19 cluster that emerged a week ago, when the wife of the country’s prisons director tested positive after cold symptoms for three days.

With the six new cases, the number of people who have tested positive in the cluster is now 29.

The disease control department also said in its Friday afternoon statement that three new arrivals from the U.S. had also tested positive that day.