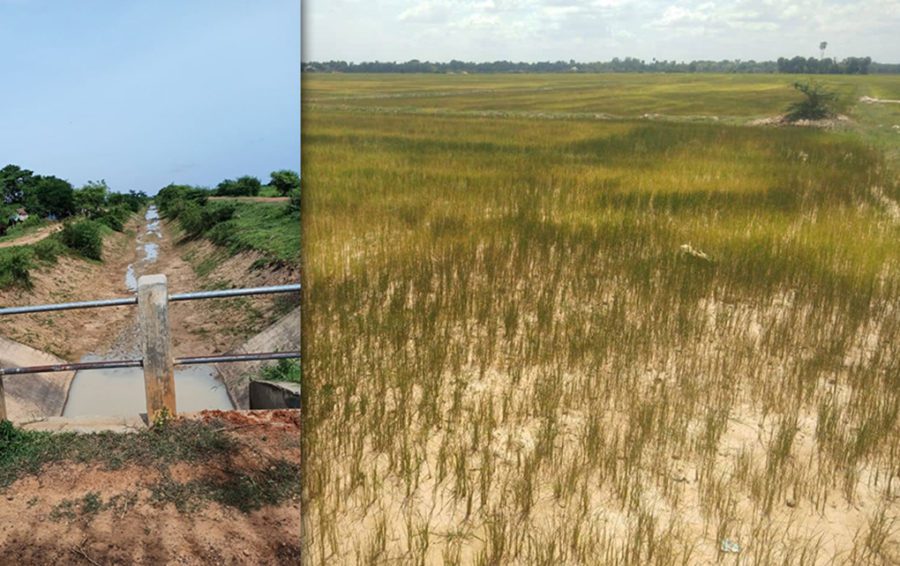 About 150,000 hectares of rice fields in 10 provinces are suffering from drought, according to Agriculture Ministry figures, with farmers in some areas saying more than half their crops are dying.

Yoeu So, a farmer from Battambang’s Thma Koul district, told VOD that almost all his neighbors were suffering after a nearby canal dried up.

He had borrowed money to farm his 100 hectares this rainy season, but about 40 percent of the rice was damaged, he said.

But more than half of the rice in the area was dying, he estimated.

Rohal commune chief Smot Penh said about 40 percent out of 3,000 hectares of rice fields in his commune were dry.

Hang Savuth, a farmer from Preah Vihear’s Choam Ksan district, said people in his district would be facing food shortages and bankruptcy.

“The farmers farm rice according to the fate of nature,” Savuth said. “They mainly depend on the rainfall. If there is no rain, nothing can be done.”

Theng Savoeun, director of the Coalition of Cambodian Farmer Community, said the human impact — especially of mounting debt — was severe, and hoped the government could step in to provide seeds and low-interest loans, for the short-term, and better irrigation for the future.

Desperate farmers have been using up all their rice for food or to sell for food rather than saving seed for the next planting.

“The government could restore the old canals from olden times that were able to provide enough water for the farmers to use, if the government does not have the ability to create a new system,” Savoeun said.

Agriculture Minister Veng Sokhon said there was little the government could do about the drought since irrigation systems were available — they had simply dried up.

“I have seen that the farmers have enough water sources,” Sokhon said.

The government would attempt to alleviate farmers’ hardship by providing seeds to farmers, Sokhon said.

“But what is important is whether the rains will eventually arrive,” he said. “It is difficult to tell.”