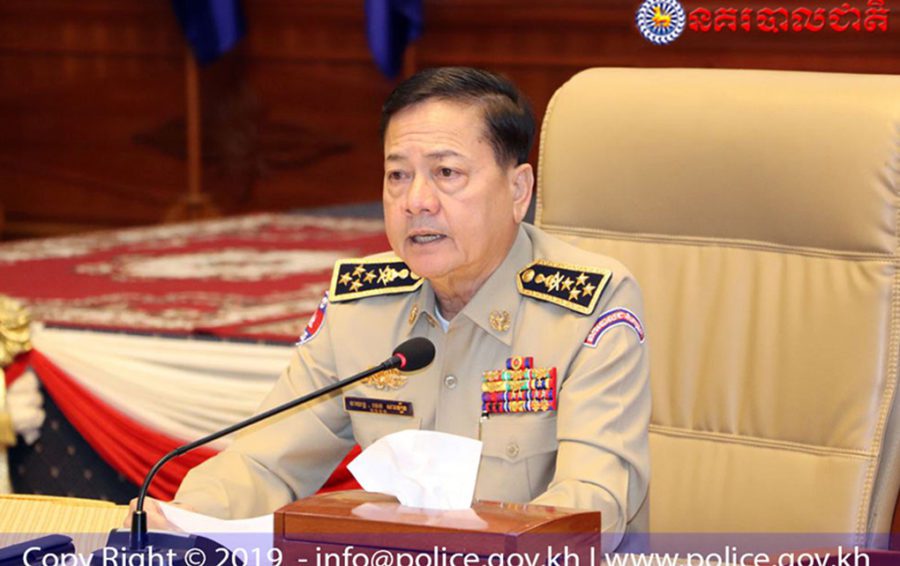 National Police Commissioner Neth Savoeun has ordered police officials to work to rid the nation of criminal groups using Cambodia as a staging ground to process, distribute and export — but not produce — illegal drugs.

The command came four days after the release of a U.N. report stating that Asia’s multibillion-dollar methamphetamine market had seen a marked shift in organized criminal group’s trafficking routes and in increasing quantities being trafficked from Myanmar east through Laos to Thailand, Cambodia and Vietnam.

The U.N. Office on Drugs and Crime (UNODC) report attributes the change to stricter law enforcement efforts in China and along the northern border between Myanmar and Thailand.

Cambodia saw a 700 percent rise in methamphetamine seizures between 2014 and 2018, the third-highest increase in the region behind Myanmar and Laos, the report says.

“Seizures of both [crystalline and tablet methamphetamine] are being made in quantities unimaginable a decade ago, with at least 120 tons seized in the region in 2018,” it says.

On Monday, during a meeting on the government’s anti-drug campaign — which launched at the start of 2017 — Savoeun said traffickers were not only transporting drugs through Cambodia, but also importing the raw materials of synthetic drugs for use in processing, distributing and exporting the illicit substances overseas.

In the last year, he said, Cambodia had been hit hard by the drug trade and that he was especially concerned by the importing of precursors used to process drugs inside the country.

“Please start a campaign to crack down on the processing and manufacturing in Cambodia,” Savoeun said, adding that the word “production” should not be used.

“It is processing, using ingredients from outside to add more weight [to the drugs]. If it is produced, we don’t know what our country will be so we have to pay attention,” he said.

Vietnamese authorities had made many arrests related to the export of drugs from Cambodia, leading Hanoi to request anti-drug measures from Phnom Penh, Savoeun said. Cambodian authorities had also busted drug traffickers coming from Vietnam, resulting in the neighbors issuing joint initiatives to prevent cross-border trafficking, he added.

The UNODC report said Southeast Asian criminal networks had attained a global reach and were “trafficking unfathomable quantities of high-profit methamphetamine,” in addition to illicit wildlife and forest products, and counterfeit consumer and industrial goods.

The meth market of Southeast Asia and East Asia, Australia, New Zealand and Bangladesh is “inter-connected and now estimated to be worth between US$30.3 and US$61.4 billion annually,” the report says.

General Meas Virith, secretary-general of the National Authority for Combating Drugs (NACD), said chemical substances, mixing machines and other equipment found at the scene of drug busts led authorities to conclude that drug processing was occurring inside the country.

“I accept that there is processing but there is no sign of production in Cambodia. Manufacturing means they produce [or grow] the raw materials and turn it into drugs. Processing means that they already have drugs,” Virith said.

“Before we saw that [drugs] were only in downtown areas but now it spreads to rural areas,” Sokha said. “They are not processing locations yet. After seeing such evidence, I think it is easy to take action.”

In the first six months of this year, some 7,600 people were arrested for drug-related crimes and 312 kg of drugs were confiscated by authorities, according to a National Police report.

To combat organized crime groups’ meth trafficking, UNODC recommends measures to build the capacity of law enforcement so authorities are better able to disrupt the illicit trade of drug precursors along major trafficking routes, especially border crossings, and develop multilateral policies that allow coordination between governments in Southeast Asia and other regions.