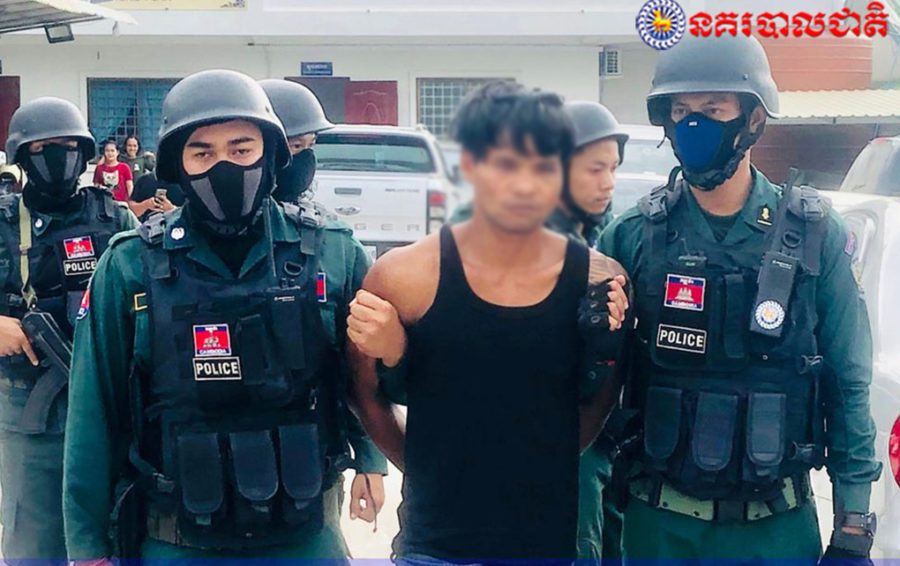 Police arrest a suspect in a child rape-murder case on June 2, 2019. (National Police)

The frequency of child rape cases has shown no sign of slowing in the past three years despite efforts to combat the crime, the government’s anti-human trafficking chief and a leading NGO said on Wednesday.

“We have tried our best to stop them, but the cases still do not decrease,” said Chou Bun Eng, secretary of state at the Interior Ministry and head of the National Committee to Combat Human Trafficking.

Bun Eng blamed drugs, alcohol and technology for the persistence of child rape in Cambodian society.

“It is related to the news that they see, pornography, and drugs and alcohol making them unable to control their feelings,” she said.

Violence associated with child rape cases also appeared to be on the rise, she added.

“What is more cruel is that they rape and then kill. That is scary,” Bun Eng said. “Perpetrators have become more cruel.”

Am Sam Ath, monitoring manager at rights group Licadho, said the NGO had recorded 50 cases of child rape so far this year — a comparable number to the first half of 2018.

In addition to drugs, alcohol and technology, a decline in ethics across society and the weak enforcement of the law contributed to the prevalence of rape, he said.

The government and civil society should also work more closely to educate people at the local level about community safety, he said.

On May 29, a 10-year-old girl was raped and murdered and a 2-year-old boy beaten to death in Preah Sihanouk province’s Prey Nop district while their parents were at work.

Police arrested a suspect, Meang Vichet, four days later. The provincial court has placed him in pretrial detention on charges of murder with aggravating circumstances and murder accompanied by torture, cruelty or rape. The crimes carry maximum jail sentences of 30 years and life, respectively.