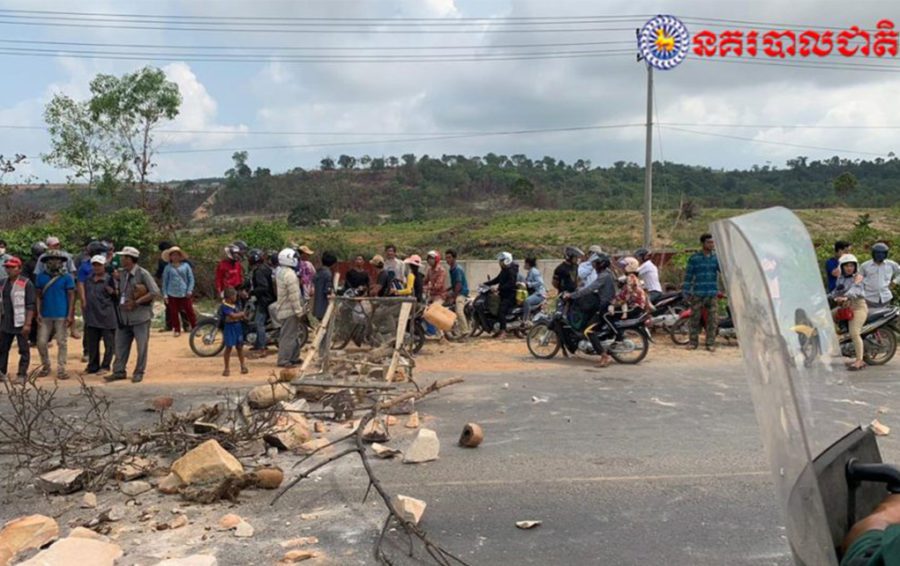 The Preah Sihanouk Provincial Court has charged the eight residents of Prey Nob district’s Bit Traing commune who were arrested last week over a land dispute that turned violent when they began hurling rocks at police sent to clear their homes.

Court spokesman Lim Bunheng said on Tuesday that the eight, including two women, were charged with “intentional violence with aggravating circumstances” under Articles 218 and 411 of the Criminal Code and with “hampering or using any means as obstacles to public traffic” under Article 80 of the Traffic Law.

The group were involved in a same land dispute in Bit Traing that flared up on April 18 and 19 after forces were sent to clear the land of what the provincial court had deemed illegal settlements. The residents set up a roadblock and later pelted rocks at police, injuring six officers as they retreated and damaging three cars.

The eight were sent to the provincial prison for pretrial detention, he added.

Sao Salin said her mother, Thy Sali, was one of the arrested but said her mother in fact had nothing to do with the incident and was only there babysitting her children.

“The others demonstrated, but my mother had nothing to do with this,” Salin said, adding that her mother had no land in the area and so had no reason to protest.

San Sokha, the wife of another accused, Niem Chim, said her husband too was not guilty. She acknowledged he armed himself with a rock, but had not used it.

“The authorities were attacking women and my husband only jumped in to block them because the authorities hit me, but I did even not know,” Sokha said.

“I was at the front, and people kept pushing so,” she added. “My husband got angry with the officer who hit me. All the men got very angry and they threw rocks, but my husband just picked up a rock and walked around but did not throw it.”

Cheap Sotheary, a coordinator for local rights group Adhoc, said her organization did not support the establishment of the roadblock or the use of violence last week but she urged the courts to properly establish those arrested were in fact guilty.

“Some of the those who actively protested and blocked [the road] escaped. For those who were arrested by police, they did not escape because they thought they had not committed any wrongdoing,” Sotheary said, explaining that the group that was ultimately arrested had paid the price for cooperating with the authorities.

“When the police arrested them, deputy [provincial] prosecutor Huot Vichet had called those people to go and have a talk, so people agreed to go with him. They were sitting at a nearby hut and had a discussion — and then they were arrested and accused of throwing rocks and participate in roadblock,” she said.