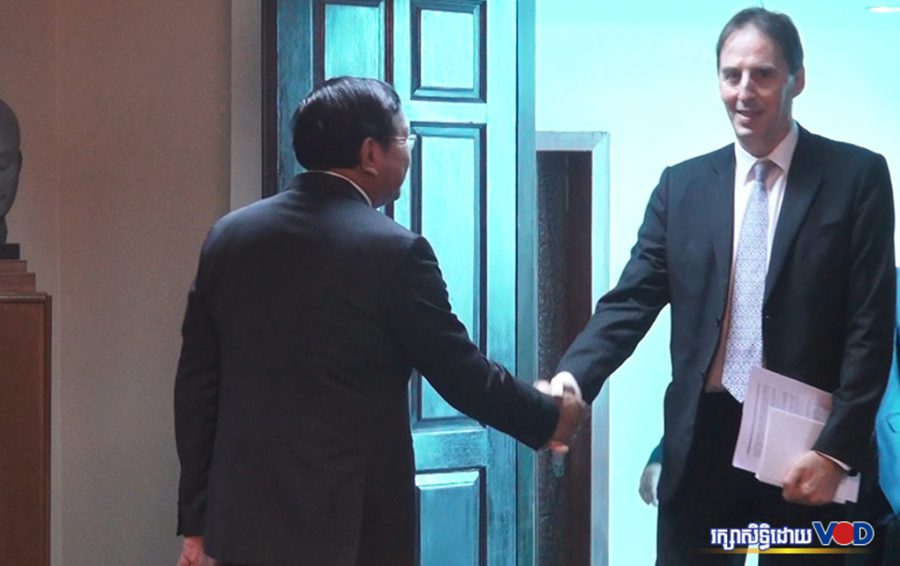 The E.U. delegation is determining whether to suspend Cambodia’s tariff-free access to its markets over concerns related to the dismantling of the country’s political opposition ahead of last year’s national election.

But the E.U. visitors did not seem to understand the “truth” of Cambodia despite the government’s repeated guidance, Sorphann said.

“We noticed that their report did not reflect [realities] about the government, especially as we have replied to the E.U. with 83 pages of statements,” Sorphann said.

E.U. statements on Cambodia have instead focused on “the deterioration of democracy, respect for human rights and the rule of law in Cambodia.”

“There are severe deficiencies when it comes to human rights and labour rights in Cambodia that the government needs to tackle if it wants to keep its country’s privileged access to our market,” E.U. Commissioner for Trade Cecilia Malmström said in February.

Sorphann said the E.U.’s problem was that they did not give enough weight to Cambodia’s progress and successes.

“We saw that they have not reflected on the development of Cambodia,” Sorphann said. “So every time … [we] always remind them to highlight the actual truth of Cambodia.”

The country continues to enjoy rapid economic gains despite the purported tightening of political and civic freedoms. Much of that growth, however, is driven by garment exports to the E.U. and U.S., and could be imperiled by a suspension of the EBA.

The main opposition Cambodia National Rescue Party (CNRP), dissolved in November 2017, said in a statement on Thursday that “additional hardship possibly association with a suspension of the EBA programme can possibly be avoided only by [Prime Minister] Hun Sen.”

“The majority in Cambodia believe in rule of law and share the view that democracy and human rights are at the heart of the partnership of Cambodia with the EU and other nations,” the statement said.

Soeng Senkaruna, spokesman for rights group Adhoc, said the government was the one that needed to better understand the E.U.’s conditions for providing the EBA, instead of again rehashing its usual arguments.

“We have not understood the conditions of the E.U. and we are always failing to solve it at the right point,” Senkaruna said. “It’s old words that don’t scratch the right itch.”