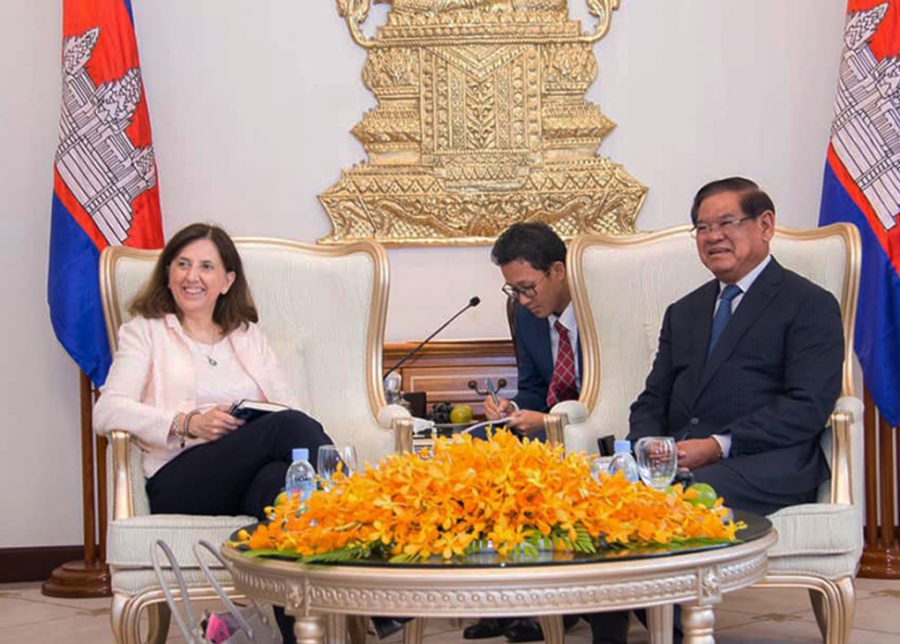 Interior Minister Sar Kheng told visiting EU delegates that the government was working to fulfill its commitments to democracy and civil society, according to an Interior Ministry spokesman.

The EU delegation, in the country from Wednesday to Friday, met with Kheng, Foreign Affairs Minister Prak Sokhonn and Commerce Minister Pan Sorasak in separate meetings on Wednesday.

They discussed the EU’s concerns over the human rights situation in Cambodia, which could lead to the suspension of favorable trade arrangements under the Everything But Arms agreement.

Interior Ministry spokesman Phat Sophanith told media after the meeting that the EU delegation had raised two main issues: opening up a space for civil society and protecting political rights.

“Samdech [Sar Kheng] informed the EU delegation in return that with regard to these, the government is trying to adhere to its statement issued on Dec. 3, 2018,” Sophanith said.

On December 3, the Foreign Affairs Ministry issued a three-page statement titled “Further Steps to Strengthen Democracy and Political Space.” The statement detailed what it said was the government’s strong commitments to a multiparty democracy, promoting genuine partnership with civil society organizations, and freedom of expression.

Soeng Senkaruna, a senior investigator with human rights group Adhoc, said the government had opened some space for civil society organizations to operate, but it had not responded to criticisms over political rights.

“Civil society is just one part,” Sen Karona said. “The important political issue is allowing political rights for politicians to participate in competitive [elections], which are the conditions [of the EU]. We have already seen there is nothing.”

The only action taken by the government had been a legal amendment allowing members of the dissolved political opposition—banned from politics for five years—to apply to be reinstated, he said.

“This does not seem enough to [meet] the conditions that the EU asked government to solve,” Senkaruna said.

The visit comes after the EU began a process on February 11 that could lead to the temporary suspension of Cambodia’s preferential access to the EU market.

On Tuesday, nearly 70 NGOs and associations issued a joint statement calling on the government to take strong action to restore human and labor rights in accordance with the EU’s conditions for the EBA.