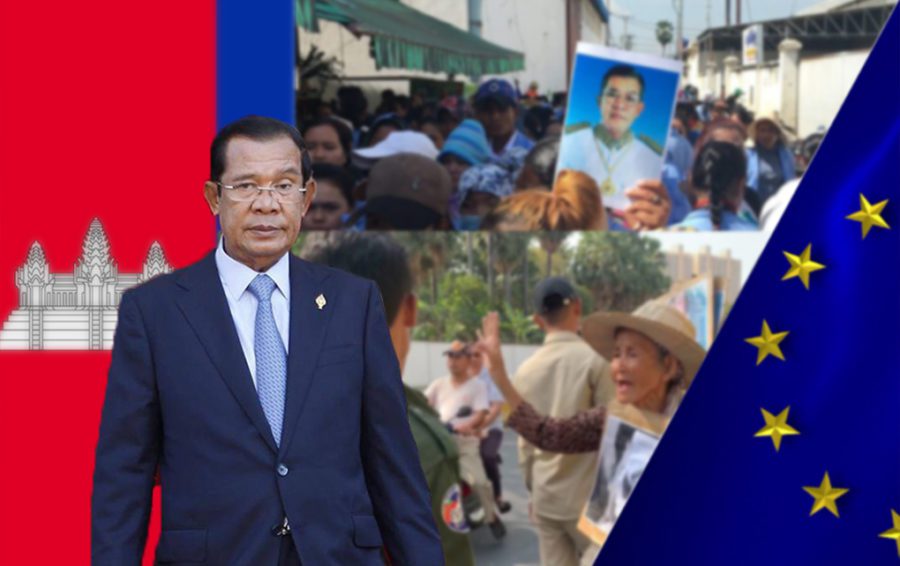 The European Union said Prime Minister Hun Sen’s government “must show real, credible improvement” on labor and human rights issues to avoid a withdrawal of Everything But Arms (EBA) tariff exemptions to its market.

E.U. trade officials completed their second fact-finding trip last week as part of a review of the country’s eligibility for the scheme in the wake of recent political repression, with Foreign Affairs Minister Prak Sokhonn telling the visiting European trade delegates to shift their focus onto the country’s economic development.

However, a June 11 press release from the E.U. called for the government to demonstrate concrete changes in order to not to lose EBA trade privileges.

“The EU’s aim is to address the human rights and labour rights concerns. The EU is committed to work with the Cambodian authorities to achieve this. Cambodia must show real, credible improvement on the issues of concern in order to avoid the withdrawal of EBA preferences,” the E.U. statement said.

The fact-finding mission specifically examined potential violations of political rights, freedom of expression and freedom of association, the right to organize and collective bargaining, and the dispossession of families caused by economic land concessions (ELCs) in the sugar sector, the statement said.

It also noted that the six-month monitoring and evaluation period in the review of Cambodia’s EBA eligibility, which began in February, will end in mid-August, and said that the E.U. would then produce a report on its conclusions.

Europe is Cambodia’s single-largest export market, accounting for about 40 percent of the country’s exports, which totaled about $11.2 billion last year. The E.U. on February 11 launched its review of the EBA deal with Cambodia, which links tariff exemptions to obligations related to human rights and democracy.

“There are severe deficiencies when it comes to human rights and labour rights in Cambodia that the government needs to tackle if it wants to keep its country’s privileged access to our market,” E.U. Commissioner for Trade Cecilia Malmström said in February, when the bloc began the review process.

Katta Orn, a member of the Cambodian government’s Human Rights Committee, told VOD on Thursday that the E.U. should “fairly” evaluate the human rights situation in Cambodia and look at the positive developments Cambodia has achieved.

Orn said the government has been improving its human rights record.

Specifically, the official pointed to the government’s decision to allow the 118 opposition officials banned from political activities when Cambodia National Rescue Party (CNRP) was dissolved in November 2017 — nine months before the election — to request the restoration of their constitutional rights from the Interior Ministry.

Orn also pointed to the release of opposition leader Kem Sokha from a remote maximum security prison, where he was imprisoned for a year, to house arrest in Phnom Penh. Sokha has now been detained for 21 months without trial over the government’s claims he conspired with the U.S. to overthrow Hun Sen and the government has repeatedly rejected appeals for his unconditional release.

“Now the king has already given rights to the 118 officials and lawmakers to have their political rights back,” Orn said, before calling for the E.U. trade officials to broaden their focus. “Human rights issues are not just about these 118 people — we also want [the E.U.] to evaluate the 16 million people in Cambodia.”

“We cannot just evaluate that the whole of Cambodia has human rights violations [based on the treatment of the opposition]. That is so unjust and something the government and Cambodia’s Human Rights Committee cannot accept.”

Hun Sen has said that he does not care if EBA tariff exemptions are revoked from Cambodia due to his government’s refusal to respond to the E.U.’s demands.