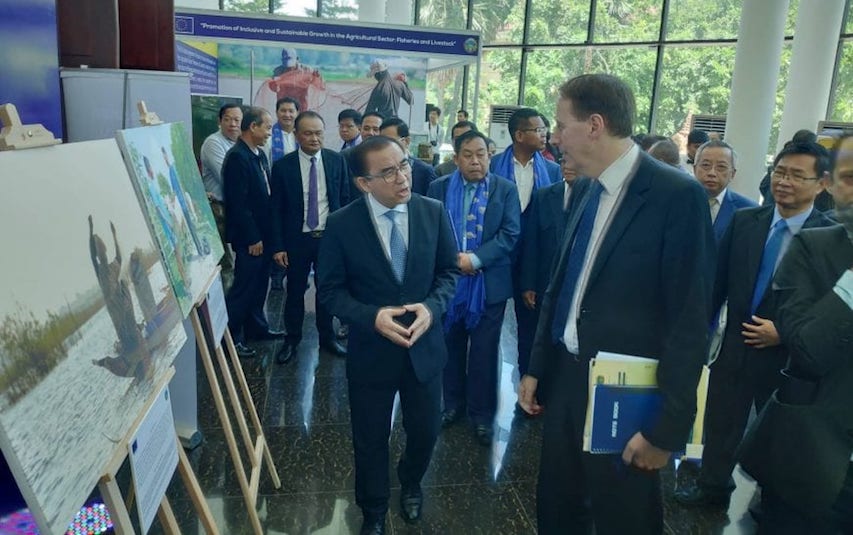 The E.U. on Wednesday inaugurated a 112-million-euro (about $124 million), five-year grant to improve Cambodia’s fisheries sector.

At a signing ceremony for the project, E.U. Ambassador George Edgar said he hoped the project would be part of promoting better relations between the E.U. and Cambodia.

The program involved civil society groups and U.N. departments and had been in planning since 2013, he said.

“The fisheries sector is hugely important to the livelihood of a very large number of people in Cambodia,” he said.

Agriculture Minister Veng Sakhon said the aim of the project was to improve the sustainability of the sector by preventing illegal fishing and developing the capacities of civil society and fishing communities.

“Fishing season comes for only two or three months each year. So we should know how to store [the catch],” he said. “We need the participation of everyone, starting from the fishing communities and through to the private sector.”

The Agriculture Ministry said the E.U.’s grant was divided into two parts: 87 million euros for the management of fisheries resources and 25 million for aquaculture. The project would be focused on the Tonle Sap lake and marine fisheries, the ministry added.

The program succeeds a previous 20-million-euro E.U. fisheries and livestock program from 2013 to 2018, which provided support to 6,647 veterinarians and legal training to 162 fishing communities across the country, according to the ministry.

Since 1995, the E.U. has provided grants worth 258 million euros for agriculture, forestry and fisheries in Cambodia, the ministry said.

The aid program comes amid tensions between the E.U. and Cambodia due to the European bloc’s stated concerns over Cambodia’s “deteriorating human rights situation.” The E.U. began reviewing Cambodia’s duty-free access to its markets under the “Everything But Arms” trade scheme following the dissolution of Cambodia’s main opposition party in 2017.