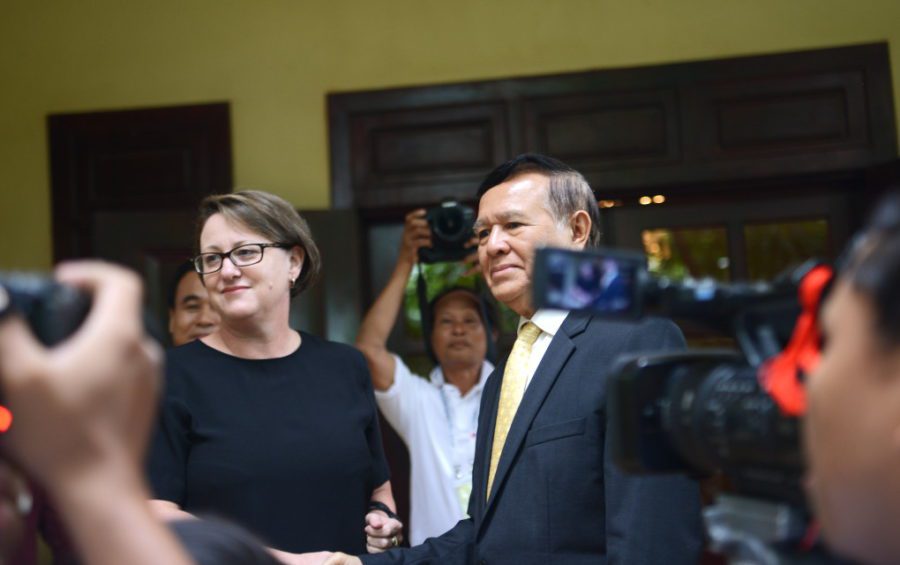 Government spokesman Phay Siphan rejected the notion that Cambodia would alter its approach to politics under the pressure of possible trade sanctions, as diplomatic meetings continued on Wednesday at the newly released opposition leader’s Phnom Penh home.

Kem Sokha, president of the dissolved CNRP, is no longer confined to de facto house arrest following a Phnom Penh Municipal Court order that relaxed the conditions of his judicial supervision on Sunday.

However, a treason charge that carries a jail sentence of up to 30 years still hangs over him and he is prohibited from engaging in political activities or leaving the country. He has not yet left his property, saying he is still unsure what would be construed as political activity.

The legal actions against Sokha — as well as the dissolution of his party in 2017, shuttering of independent media outlets, arrests of journalists and harassment of civil society — sparked wide-ranging international condemnation over the past two years.

In February, the E.U. announced a review of Cambodia’s access to duty-free trade with the bloc under the “Everything But Arms” deal, which could cost the country up to $654 million in exports if suspended, according to a World Bank estimate.

On Tuesday, the E.U. submitted its preliminary findings of its review to the Cambodian government, giving it one month to respond. A final decision on the possible suspension of duty-free trade is due in February.

Phay Siphan, head of the government’s spokespersons unit, told VOD that Cambodia had already given the E.U. explanations addressing concerns about labor and human rights violations, and the government had no intention to change its approach in order to maintain trade preferences.

“We have not talked about moderating,” Siphan said in regards to the government’s positions on the issues raised. Repeating the government’s usual defense, he said that all court cases against the political opposition and civil society were carried out according to the law.

“We’ve explained what we’ve done, because building the nation is not about feelings, words or rhetoric. We acted based on the law,” he said on Wednesday. In a separate interview earlier this week, he said he respected the E.U.’s views but “Cambodia needs to uphold justice.”

“To build democracy, we have to strengthen peace and stability,” he said.

In a Facebook post, the E.U. delegation in Cambodia wrote, “This is [the] first step in the right direction … but we expect Kem Sokha to be fully released and his political rights reinstated, so that he can play a full part in political life.”

Political analyst Kim Sok said maintaining power would be a higher priority for the government than keeping the E.U. trade deal, particularly as Prime Minister Hun Sen attempts to pass the reins to the country to his children.

“If keeping EBA will cost him power, Hun Sen won’t do it,” Sok said. “Given the current situation, Hun Sen needs to choose among two pressures.”

The first pressure was the potential loss of the EBA, and the other was having to contend with a legitimate opposition, he said.