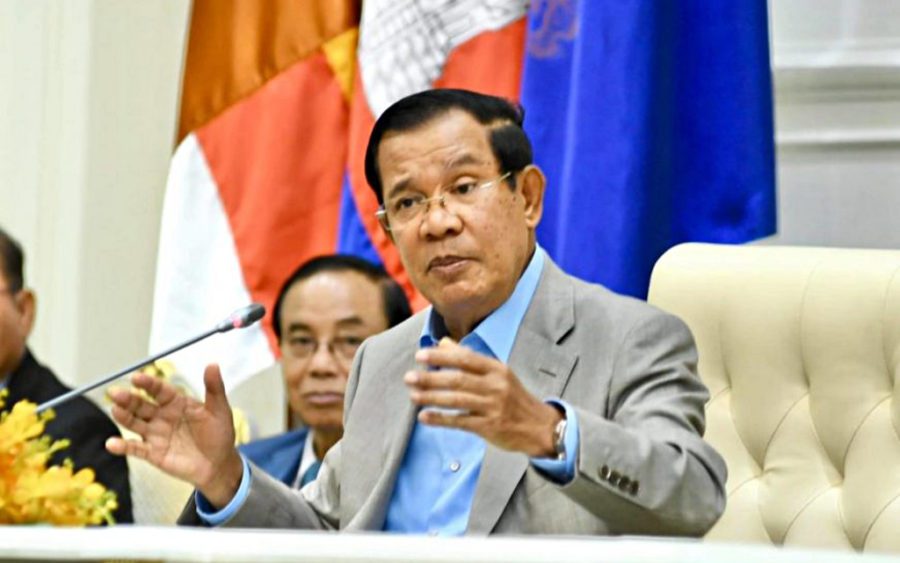 Prime Minister Hun Sen speaks at a press conference at Phnom Penh’s Peace Palace on January 30, 2020, in a photo posted to his Facebook page.

Prime Minister Hun Sen on Thursday said Cambodia would not evacuate its citizens from China, as some other countries have begun or promised due to an outbreak of a new viral strain there, to avoid harming bilateral relations and the Cambodian economy.

The novel coronavirus (2019-nCoV), which was first detected in late December in China’s Wuhan, has spread to some 15 other countries and killed more than 100 people in China, where the majority of the more than 6,000 cases confirmed globally have been reported, according to the World Health Organization (WHO).

Cambodia confirmed its first and only case of the virus on Monday: Chinese national Jia Jianhua, who flew from Wuhan to Sihanoukville on January 23, the day that China suspended flights from the city, officials have said.

Jia remained in hospital quarantine and his health was stable as of Thursday, Health Ministry spokesman Ly Sovann said.

Some Cambodian university students in China told VOD over the weekend that they feared leaving their school dormitories and risking catching the virus. One in Wuhan requested that the Cambodian government evacuate him and 20 other Cambodian students who were stranded in the city.

Australia has promised to evacuate citizens from Hubei province, where Wuhan is located, while the European Union will also help transport its citizens, CNN reported on Wednesday.

India, New Zealand, South Korea, Turkey and the U.K. have also vowed to evacuate their nationals, and Japan and the U.S. have already flown some of their citizens home, CNN said.

But despite undergraduates’ pleas and other nations’ evacuation plans, Cambodia would not pull out its citizens and leave China during such a difficult time, Hun Sen said during a press conference at the Peace Palace in Phnom Penh.

“I don’t care what other countries are thinking,” he said. “Cambodia will not act in such a way.”

The prime minister said that evacuating Cambodians would reflect poorly on Cambodia and could hurt future plans for Cambodian students to study in China.

He also appealed to people to not discriminate against Chinese people.

Public panic related to the novel coronavirus had led to requests to the government to evacuate citizens and also suspend flights from China, Hun Sen said. But the Chinese government had already acted responsibly by canceling flights from Wuhan to other countries as well as other cities inside China, he added.

Regardless, if Cambodia chose to suspend its flights from China, the national economy would suffer and bilateral ties could be seriously hampered, the prime minister said.

“Such action would contribute to killing the Cambodian economy and also contribute to diminishing relations between Cambodia and China,” he said.

China is Cambodia’s largest financial backer, providing more foreign aid and investment than any other nation in 2018, according to the National Bank of Cambodia.

Some 41 percent of Cambodia’s FDI inflows came from China, with South Korea providing the next greatest inflows at 8 percent of the total, a 2019 National Bank report said.

Cutting links to China would harm Cambodia’s service sector, including hotels and tourism, as well as Chinese businesses in Cambodia and political relations, according to Hun Sen.

“It is not an attack on China, but it is a direct attack on the Cambodian economy,” the premier added.

But Yong Kim Eng, president of the People Center for Development and Peace, said flight cancellations and evacuations of people from China were akin to helping China reduce its burden and protecting against the spread of the virus.

“Preventing the spread of the disease is a common issue for humanity as a whole. It benefits both Cambodia and China, and other countries,” Kim Eng said.