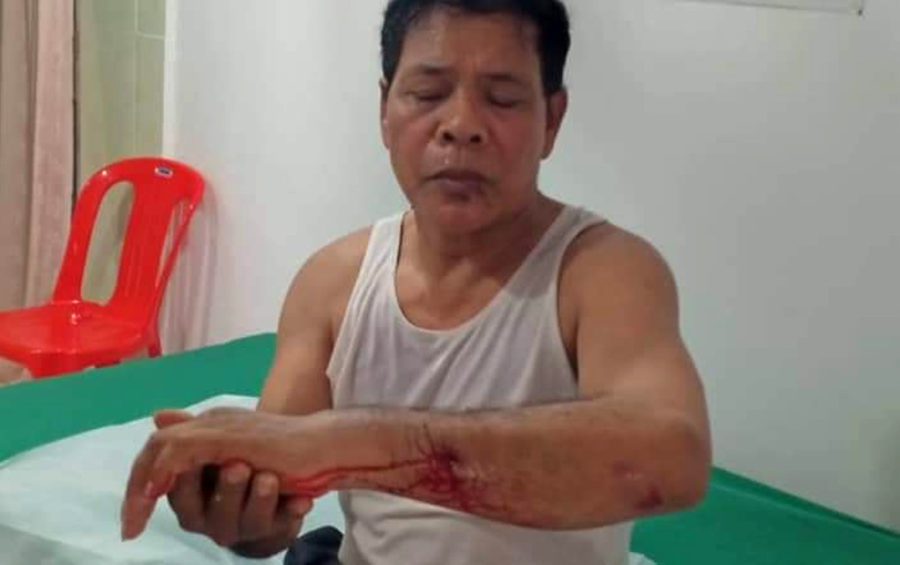 A former opposition commune chief’s arm was broken on Wednesday by unidentified, baton-wielding attackers in the second daylight assault of a CNRP supporter in Phnom Penh this week.

The separate attacks, which left ex-official Sin Bona and CNRP headquarters security guard Pouk Chanda bloodied, occurred this week as exiled CNRP leader Sam Rainsy launched a “nine-fingers” campaign to preview his planned return to the country on November 9, and officials declared that participating in the outlawed opposition’s “coup” attempt was illegal.

Bona, the former chief of Koh Dach commune, was kicked off his motorbike by two men and “severely beaten” on Wednesday morning, said Mu Sochua, a deputy president of the dissolved CNRP who lives abroad.

Had Bona not defended himself, he could have been more seriously wounded or killed, Sochua said in a message.

Bona told VOD on Wednesday that his left arm was broken by an expandable baton during the attack, which occurred at 9 a.m. along National Road 6 in Chroy Changva district.

“I was driving my motorbike and there were two attackers who followed me from behind on a motorbike. They had handguns on their waists, but I did not recognize them because they wore helmets with face masks,” Bona said.

“When they arrived, they kicked my motorbike to the ground and repeatedly beat me. I could not escape immediately and when I raised my arm to block [their blows] it was broken, and they got on their motorbike and drove away,” he added.

Bona said he went to a private clinic where he received treatment for his arm, which was broken in three places, and returned home on Thursday because he feared for his safety at the clinic.

He said he suspected the attack was premeditated because about a week before the incident, he saw people he didn’t recognize sneak into his house’s gated yard and take photos of the number plates on his car and motorbike.

When he went outside, he said they ran off.

Since the CNRP was dissolved in 2017, he said he has felt like he was being watched or followed whenever he leaves his house. Rights groups and other civil society organizations have long complained of being surveilled by authorities, especially in the year leading to the 2018 parliamentary election.

Bona, who was elected in the 2017 local election, which saw the CNRP win nearly a third of the nation’s communes, said last year he was attacked by a young man who drove a motorbike into him and broke his right arm.

At first, he thought it was an accident, but later believed it was intentional.

“The first incident, we had filed a complaint but there seems to not have been any intervention, and this time, I called the police despite my injuries but they did not pick up,” Bona said.

CNRP supporters seem to have been targeted as of late, with authorities yet to arrest the perpetrators despite the attacks happening in broad daylight and in areas busy with people, said Ny Sokha, the head of the human rights unit of rights group Adhoc.

“Based on the law, we would like to condemn those using violence because this is a criminal offense,” Sokha said. “We would like authorities to intervene and find the perpetrators to be punished by the law and to avoid impunity.”

National Police spokesman Chhay Kim Khoeun could not be reached on Thursday.

The security guard Chanda, who is a former bodyguard of Rainsy, was attacked in a similar fashion by two unknown assailants who were riding a motorbike while he was walking on Sunday morning in Meanchey district about 100 meters from the former CNRP headquarters, located near Rainsy’s house.

Chanda told VOD earlier this week that he was battered with a metal bar on the back of the head in a drive-by attack.

The attacks come after nearly 30 CNRP members and supporters have been arrested and detained, and more than 150 have been summoned for questioning by police or the courts since January in relation to gatherings or statements made in support of the opposition party, according to rights groups.

Rhona Smith, the U.N.’s human rights special rapporteur for Cambodia, said in a statement on Wednesday that the summonses and charges were “vague and unclear raising concerns not only for the freedom of expression and association and political rights but also for the right to a fair trial.”

She also voiced concerns about “civil society events and operations being monitored by local authorities.”

The CNRP was dissolved by the Supreme Court in 2017 following the arrest of party president Kem Sokha on widely criticized treason charges, which he denies. Sokha has been detained without trial for more than two years, and is currently under de facto house arrest.

On Monday, the CNRP’s exiled leader Rainsy, who has lived abroad since 2015, called on CNRP members and activists to join a nine-fingers campaign in support of his return to Cambodia on November 9 with senior CNRP leaders and Cambodian migrant workers to “take back our homes, our land and our country from Hun Sen,” Rainsy has said.

Prime Minister Hun Sen and other officials have vowed that Rainsy and other CNRP leaders who plan to return would be arrested upon any attempt to re-enter the country.

Rainsy has also urged soldiers and rivals within the ruling party to rise up against the government, though he has denied calling for a coup.

However, government officials have called Rainsy’s plans to return an attempt to overthrow the government and warned that those raising nine fingers as a sign of support for Rainsy’s return would face legal action.

Justice Ministry spokesman Chin Malin said on Wednesday that participating in the campaign and other activities that show support for Rainsy were illegal.

“Initiators or masterminds of an attempt or plan to overthrow the government would fall under the charge of attack,” Malin said.

“But for those who support in all forms — fingers, not fingers, whether or not to gather or express themselves in support of the plan of an attempted coup d’état to overthrow the government — will be charged with the crime of plotting,” he said.

Plotting an attack, which carries a sentence of five to 10 years in prison, or up to 20 years for public officials, is described in the Criminal Code as a plan by two or more people to commit an attack that includes at least one material action.

An individual who is convicted for violently attacking government institutions or violating the “integrity of the national territory” faces up to 30 years in prison, or life imprisonment if the perpetrator is an official.

Sochua, the CNRP vice president, said the government statements were a threat to freedom of expression.

“We are still appealing to all citizens to join us on November 9 because as Cambodian citizens, we have the right to freedom of expression in choosing leaders,” Sochua said.

“We cannot live without freedom and live in fear. Democracy happens only if everyone has equal rights and does not live with injustice and in fear,” she said.

Am Sam Ath, monitoring manager for rights group Licadho, said the government’s measures do not reflect the law, but politics.

“We find that some of the arrests and persecution have led public as well as domestic and international opinion to believe they are related to the political situation rather than law enforcement,” he said.