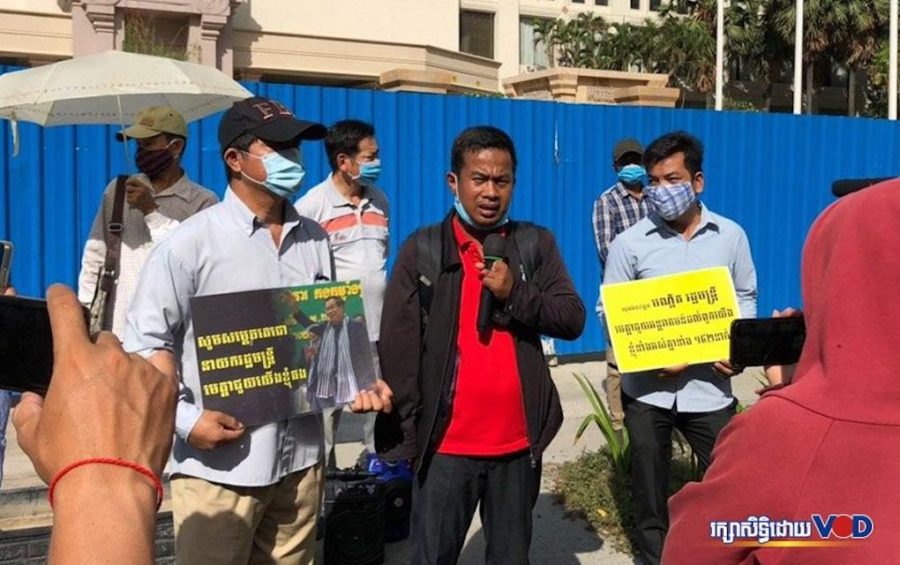 Former employees of The Great Duke Hotel protest in front of the shuttered hotel building in Phnom Penh to demand awarded compensation on May 21, 2020. (Nat Sopheap/VOD)

Former employees of the shuttered Great Duke Hotel again protested in front of the building on Thursday, calling for awarded compensation from the Phnom Penh hotel’s owner or legal action from the Labor Ministry.

Touch Kosal, president of the Cambodia Tourism Workers Union Federation, said the hotel owner has failed to pay workers the severance pay that they are owed under the Labor Law, even after a settlement decision was issued by the Arbitration Council in favor of the workers in late February.

Kosal told VOD on Thursday that the ex-staff did not want to continue demonstrating but felt they had to protest in order to get the compensation awarded to them.

“They don’t want to protest and gain fame in the media, but they want their money and when they get the money, they will stop,” Kosal said. “I would like to appeal that if [the company] wants to stop all this messiness, the company has to show it intends to find a solution and compensate workers. That is it.”

Chhoam Samphors, another representative of the workers, said more than 150 people have been waiting to receive payments from their former employer, and they decided to protest because they were facing more financial challenges after five months without compensation.

“We have to repay bank loans, like me, I am renting a house with daily expenses including utilities and other [fees],” she said.

Ly Tayseng, the hotel’s lawyer, told VOD on Wednesday that the owner of the hotel was unable to pay former employees due to the Covid-19 economic slowdown, which he said prevented the company from turning a profit.

However, the hotel — previously the five-star InterContinental Phnom Penh — closed on December 31, before reports of Covid-19 made international headlines in January. Tayseng could not be reached on Thursday to clarify or comment on the most recent protests.

But on Wednesday the lawyer said he would welcome former employees to file a court complaint rather than hold street demonstrations.

“[We] would like to ask them to resolve this according to the law,” he said. “Their choice to walk along the street and hold demonstrations is not an option in accordance with the law.”

Labor Ministry spokesman Heng Sour told workers participating in Thursday’s protest that the ministry will take action to settle the case next week, potentially compensating workers if the company does not respond quickly.

On Wednesday, Sour told VOD in a message that the ministry can only appeal to the employer to follow the Arbitration Council’s decision, but any party that does not agree with the settlement can take legal measures in the form of a court complaint.

Ou Ratana, who handles labor disputes for the ministry, said he was too busy to comment on Wednesday.

Moeun Tola, executive director of labor rights group Central, said the Labor Ministry should compel the hotel to pay its former workers, and if the ministry does not, it risks setting a bad example that could see more employers taking advantage of workers.

“If [the employer] violated any law and the union complains to the Ministry of Labor, goes through the compromise [process] and onto the Arbitration Council, and [in the end] they do not care about that decision or decide not abide by that duty…that decision is just a useless piece of paper,” Tola said. “The long-term impact is that it leads to [more] violations of the Labor Law, Constitution and the conventions of the International Labor Organization that Cambodia has ratified.”

Since the Great Duke closed its doors and fired all employees at the end of last year, former staff said they have submitted petitions to the Labor Ministry, Prime Minister Hun Sen’s Cabinet and Arbitration Council asking them to ensure the hotel compensates employees for seniority benefits, late notice of termination and unused vacation time, as awarded in an Arbitration Council decision three months ago.