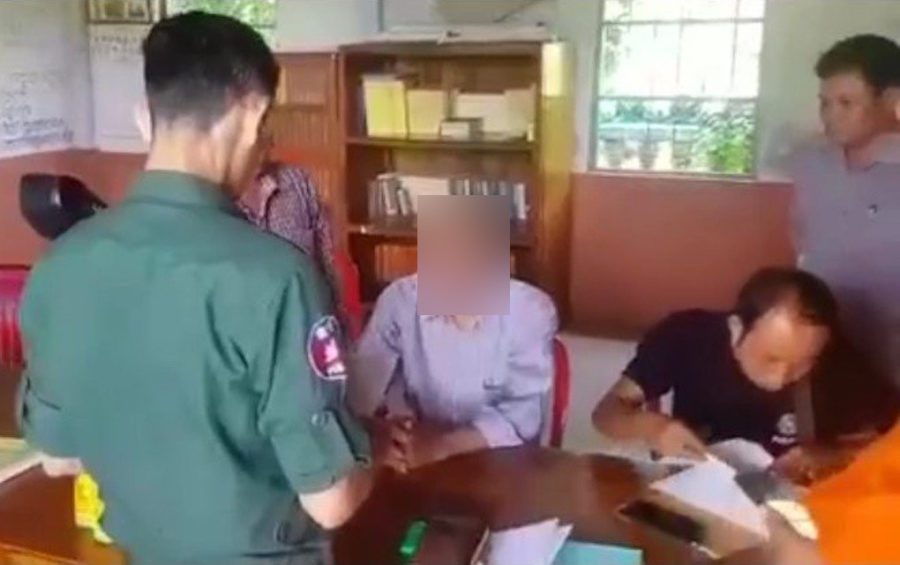 A defrocked monk (seated, center) accused of the rape of 12 boys, in an undated photograph with authorities posted to the Facebook page of the Child Protection Unit on November 10, 2020.

A defrocked monk accused of the rape of 12 boys, and who has been on the run from police for six years, was arrested in June at a pagoda in Ratanakiri province where he was living as a monk, the head of a child protection police unit said on Friday.

Local police chiefs in Kampong Cham province, where the alleged rapes of the novice monks aged 8 to 16 years old took place at a pagoda, did not say much about the case. But a commune chief told VOD that about seven minors had reported sexual assaults to the commune office in 2014 after they could no longer stand the pain of the abuse.

Sou Leang Hak, the commune chief, said the case had been sent to court after complaints were filed, and the suspect had been defrocked before this year. But at some point, the man, who is in his late 40s, became a monk again, Leang Hak claimed.

“They did not dare to file complaints,” the commune chief said. “They kept enduring it until they could not take it anymore.”

He could not remember when in 2014 they and their parents reported the alleged crimes. Each novice said the ex-monk raped them one to four times when the boys massaged him, Leang Hak said.

VOD is withholding the names of the accused former monk and the pagoda and commune where the alleged crimes happened to protect the identity of his victims. The accused has at least two known aliases, according to a February 2015 arrest warrant from the Kampong Cham Provincial Court.

The warrant says police should arrest the man on a charge of rape with aggravating circumstances. A conviction for rape of a minor is punishable by seven to 15 years in prison.

The Child Protection Unit (CPU), a police division supported by the NGO Cambodian Children’s Fund, announced the former monk’s arrest and charges on multiple counts of rape on Tuesday — some five months after his arrest, and six years after complaints against the ex-monk were filed by the novice monks he allegedly raped.

CPU said in a Facebook post that prior to the start of the police investigation in June 2014 the former monk fled Kampong Cham.

“It can now be reported that after he fled the monk changed his name and continued to work as a monk in both Thailand and Cambodia,” the post says.

Kampong Cham police arrested the now-defrocked monk at a pagoda in Ratanakkiri province in June after authorities received information that he may be back in Cambodia, said James McCabe, CPU’s operations director.

“He was working as a monk right up to his arrest,” McCabe said on Friday.

CPU said on Tuesday that the unit had delayed publicizing the arrest for the alleged rape of 12 novices until “the offender had been formerly defrocked.”

The man was defrocked sometime after his arrest, although McCabe said he could not immediately confirm when the formal removal from the monkhood occurred.

“We need to identify where he has been to see if [there are] any more victims,” he said, adding that the police investigation was ongoing.

The ex-monk is being held in pretrial detention.

Suy Soung, the commune’s police chief, told VOD that he wasn’t very familiar with the case because it dated back years ago to when he was a regular officer, and referred questions to district police.

But Prey Chhor district police chief Keo Seang Hean declined to answer questions. He noted that the case dated to 2014 and the former monk had been previously arrested, while also likening a reporter’s questions about the years-old case to unearthing a corpse.

Provincial police chief Ek Kosal could not be reached on Friday.

Leang Hak, the commune chief, said that after complaints against the ex-monk were submitted to his office in 2014, the case was turned over to the court.

Some local villagers changed their opinion of the accused monk while others believed he was innocent, according to Leang Hak.

“We kept the complaint because some Buddists took sides with the monks and accused us like this and that, so that’s why we demanded evidence [from the victims],” he said.

Some of the novices left the monkhood because “they were scared and did not want to stay in that pagoda because of their complaint and rumors of threats against them … and they were concerned about [their safety],” Leang Hak said.

He said he later learned that the monk had been defrocked, and then re-entered the monkhood.

“This case was handled by the police while for us as the commune authority, we did not hear about it after it reached the court,” he said. “We do know how he became a monk again and who helped him become a monk [again].”

A spokesperson for the Kampong Cham Provincial Court could not be immediately contacted on Friday.