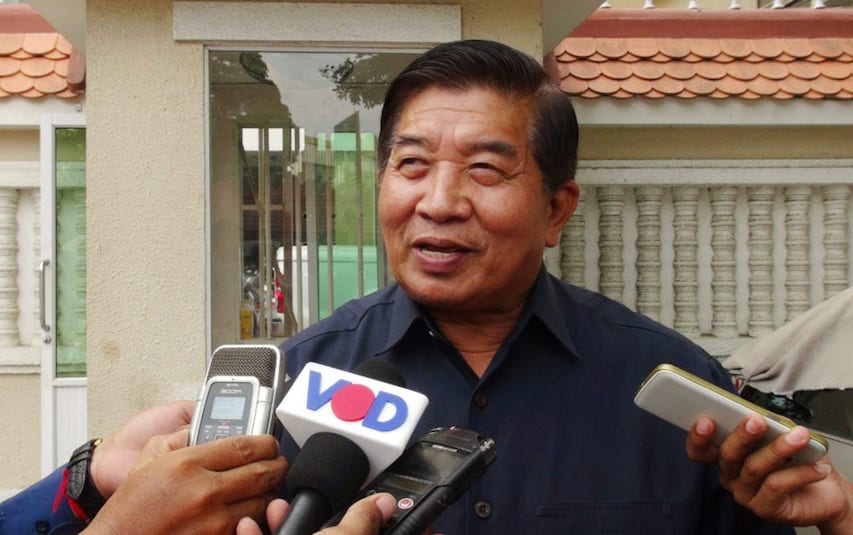 Ahmad Yahya, former secretary of state at the Social Affairs Ministry, speaks with journalists outside the Phnom Penh Municipal Court in this file photo.

A former secretary of state and his nephew were sentenced to 15 years in prison for human trafficking this week after two women who were sent to work in Saudi Arabia by the ex-official’s recruitment agency filed complaints against the pair, a court official said.

The Phnom Penh Municipal Court on Tuesday found Ahmad Yahya, a prominent Muslim community leader and former secretary of state at the Social Affairs Ministry, and his nephew Ismael Pin Osman guilty of unlawful removal of a person for cross-border transfer for crimes dating to 2004, said deputy prosecutor Kuch Kimlong.

The two women, also members of the Cham Muslim minority group, were exploited and abused while working as maids in Saudi Arabia, with employers also withholding pay.

In 2017, Yahya told The Cambodia Daily that his worker recruitment company had sent a 16-year-old girl to work as a maid in Saudia Arabia, where she was stranded for 12 years, although he claimed that he did not know she was a minor at the time.

On Tuesday, Yahya and Pin Osman were ordered to pay a fine of 100 million riel each, or $25,000, and compensation to the two plaintiffs totaling 200 million riel, Kimlong said.

The men were sent to Prey Sar prison following their sentencing.

Before joining the ruling Cambodian People’s Party, Yahya was a senior official of the royalist Funcinpec party and later joined the opposition Sam Rainsy Party. Pin Osman was a former lawmaker for the outlawed opposition Cambodian National Rescue Party for Kampong Cham province.

In 2016, Yahya was found guilty of defaming another prominent Muslim politician, Labor Ministry official Osman Hassan, and ordered to pay him 100 million riel, or $25,000, in compensation. The two rivals were engaged in a heated land dispute in relation to the mosque at Phnom Penh’s Boeung Kak lake.

Hassan told VOD this week that Yahya’s case did not concern him and was a matter for the court.

Kamaryah Ahmad Yahya, Yahya’s wife, said she believed the charges against him were “a kind of set up to put the blame on him.”

“My husband is a good person who used to help everyone,” she said. “I believe that he did not do business like he was accused.”

“Based on the witnesses and evidence, it is unbelievable … but the court sentenced my husband,” Kanha said. “It is so unjust.”

Meanwhile, the Muslim Student Association, which had been sponsored by Yahya, posted a message of support and a photo of Yahya on its Facebook page.

“I and my friends will remember and be grateful for his initiative in helping and supporting our education,” the post said. “We all would like to share the hardship from a distance.”

Despite the expressions of gratitude and claims of injustice, Yim Virak, spokesman for the Interior Ministry’s National Committee for Counter-Trafficking, said the authorities were prepared to present additional evidence against Yahya and Pin Osman if needed.

“We have and will collect more information if there is any appeal against this case,” Virak said.