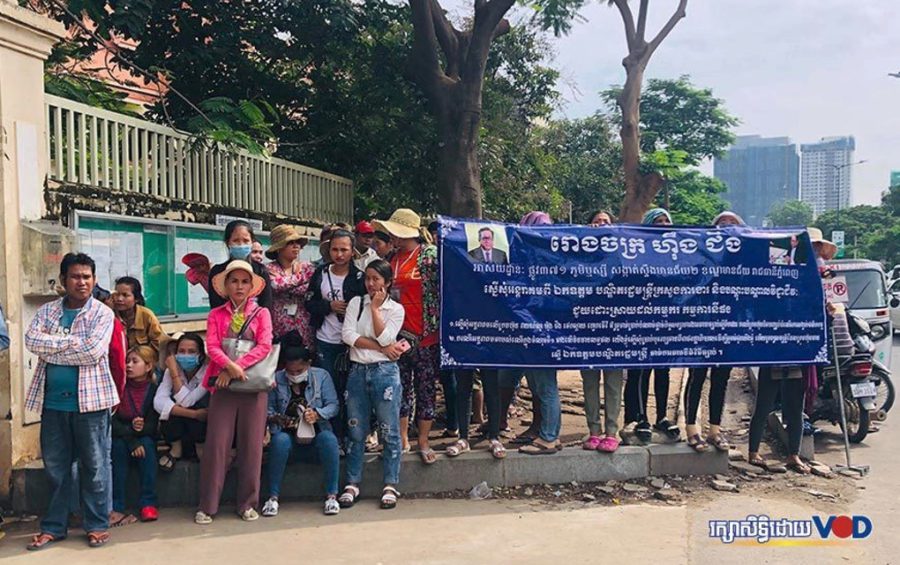 Workers from the Hoeng Jin factory gather in front of the Labor Ministry in Phnom Penh on October 8, 2019. (VOD file photo)

Marking the end of a monthslong dispute, about 150 garment factory workers received compensation on Thursday following the closure of the Hoeng Jin garment factory in August and the owner allegedly having gone into hiding. Workers and their representatives say they received too little too late.

Seang Yot, a dispute resolution officer at union CCAWDU, said 50 workers, who are also members of CCAWDU, received the lion’s share of compensation amounting to $32,400 due to their seniority at the factory. The other workers received about $5,000 in total, he said.

“Now all workers have received their money with officials from the Ministry of Labor handling the distribution,” he said.

On Monday, he attended a meeting in Phnom Penh between unionists, Labor Ministry officials and representatives of the company that will buy equipment from the shuttered factory. Yot afterward said that 50 workers were entitled to $130,000 in total in compensation for seniority payments, but had accepted a total sum of $37,000 to put an end to the dispute.

The factory closed on August 10, with an administrative staff member later claiming it could not continue operating after workers had protested since July over irregular payment. The owner is alleged to have fled the country.

Pov Lina, one of the 50 CCAWDU members at the factory, on Thursday said she had received $945 in compensation after having worked at the factory for nine years. “Even though it is not as much as I should have received, I am happy because my labor dispute has finished,” she said.

Following the meeting on Monday, she had told VOD that workers had guarded the factory by sleeping in front of it to prevent equipment being sold off without workers being adequately compensated.

Uoy Naisy, Hoeng Jin factory’s chief of administration, could not be reached.