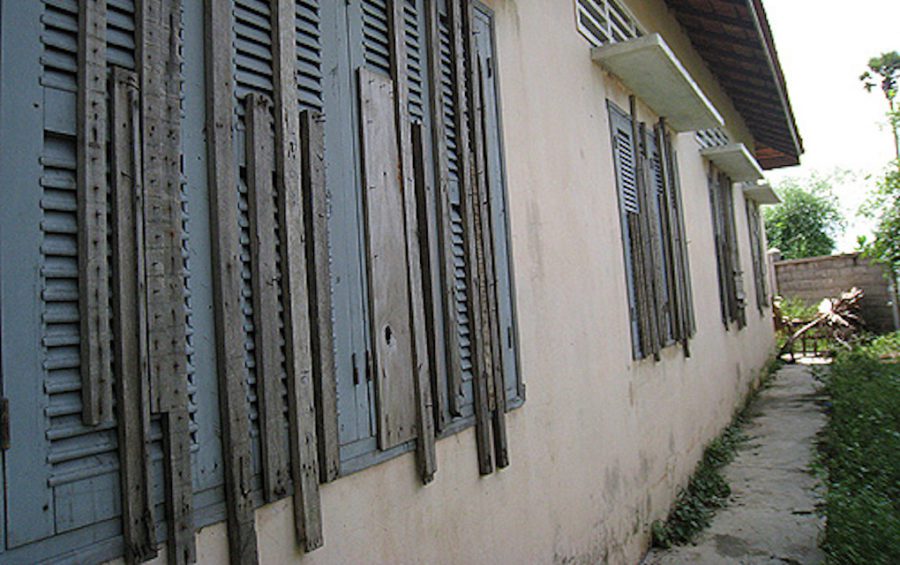 The rear windows of a formerly used building at the Prey Speu detention center in Phnom Penh, which were boarded shut so detainees could not escape through them. (Licadho)

The government’s anti-drug crusade since 2017 has resulted in “serious and systematic” human rights violations against drug users rather than achieving its goal of reducing drug use in the country, rights watchdog Amnesty International said in a new report.

Cambodia’s “war on drugs” has resulted in arbitrary arrests and detentions of drug users, denial of fair trial rights, severely overcrowded prisons and drug detention centers where detainees face violent abuse, and various other rights violations, according to the report released on Wednesday.

But officials this week said that the government’s efforts against drug use and trafficking have been “successful,” and dismissed the report’s allegations of abuse.

The report, “Substance Abuses: The Human Cost of Cambodia’s Anti-Drug Campaign,” documents the government’s anti-drug crackdown since January 2017, which officials said at the time would include ramped-up law enforcement, rehabilitation, anti-trafficking and education.

Cambodia has long been a transit nation for methamphetamine and other illicit substances, with crystal meth among the most abused drugs. The number of users in prisons and compulsory government rehabilitation centers has ballooned in recent years as authorities raided drug hotspots and detained people, often without convictions, the report said.

Nuth Savna, spokesman for the Interior Ministry’s prison department, said the nation’s 28 prisons had become more crowded since the anti-drug campaign began, with more than half of Cambodia’s 39,000 prisoners incarcerated for alleged drug crimes.

Officials often claim that authorities do not imprison people solely for drug use and instead treat drug users as “victims” who will be provided rehabilitation treatment.

However, in every case documented by Amnesty, the organization said people who did face trial for drugs were convicted, with no bail offered, and those sent to drug detention centers were not given access to a lawyer, described physical abuse by center staff or other detainees, and were held involuntarily, while voluntary drug treatment options remain limited.

Amnesty’s report, which is based on 51 interviews, mostly with people who used drugs, conducted in November and December 2019, also describes accounts of torture, sexual violence and deaths in custody.

One former “room leader” at the compulsory Orkas Khnom drug rehabilitation center in Phnom Penh said a “mixture of beating, torturing, and addiction” killed a detainee in March 2018, according to Amnesty.

Mom Chandany, director of the Phnom Penh social affairs department, which oversees the state-run center, declined to comment, asking a reporter to submit a formal letter requesting an interview.

In some cases, survivors told Amnesty researchers that they were forced to “confess” under torture and other mistreatment.

A 30-year-old woman from Phnom Penh recalled how she was tortured by authorities with a Taser following a drug raid.

“They asked me how many times I sold drugs… The police officer said if I didn’t confess, he would use the taser on me again,” the woman said, according to Amnesty.

The report says that once poor and marginalized defendants are accused of a drug crime they “face an effective presumption of guilt that is almost impossible to overcome.”

Meas Vyrith, secretary-general of the National Authority for Combating Drugs (NACD), said the anti-drug campaign had been “really successful” and that human rights have been respected.

Dismissing Amnesty’s findings about alleged abuse and deaths in custody, Vyrith said he had never received information about the death of a drug user at a drug detention center.

“No one died because of drug issues or died while receiving services from rehabilitation centers,” he said.

But in May 2017, a recovering drug user with HIV died 10 days after he left Phnom Penh’s Prey Speu detention center, a “vocational training” facility where the capital’s homeless, drug users and other marginalized people are detained.

An NGO worker at the time attributed the man’s death to him being denied access to medication and methadone treatment while he was locked up for more than a month, according to a report from the Cambodia Daily. Police claimed the man had died of a heart attack.

At least five other people are reported to have died while detained in Prey Speu since 2014, the Daily reported.

Vyrith said no government leaders wanted citizens to be subjected to abuse.

“Authorities or government are parents like in a family who don’t want their children to suffer. That is why we have tried all means in line with the law to protect people’s interests, especially related to drug issues, well-being, security and public order,” he said.

Asked how he measured the success of the anti-drug campaign, Vyrith told VOD that “the number of drug users are under control and decreased.”

“Before 2017, we saw [news] reports related to drugs every day, but now, we rarely see it,” he said, adding that the cross-border nature of drug crimes meant that the problem had not been fully eliminated.

More than 7,600 people were arrested for drug-related crimes in Cambodia this year as of Monday, according to figures provided by Vyrith. Of about 3,900 drug cases, some 2,400 involved people selling or producing drugs, while about 1,500 involved people using drugs.

Justice Ministry spokesman Chin Malin said the purpose of the anti-drug campaign is to ensure security and public order, and the government had “got a positive result” in arresting and prosecuting users and traffickers.

Malin called for “specific evidence” rather than “an accusation” from Amnesty, and said he doubted the trustworthiness of the report, which is based on interviews with 20 people who were detained in Phnom Penh detention centers and 15 documented drug cases, mostly involving people who were incarcerated in capital prisons.

The anti-drug fight “will need to continue as long as drug production, drug dealing and drug trafficking across Cambodia still exist,” the spokesman said. “So, the campaign needs to go on too.”

The ministry would introduce a plan focused on addressing prison overcrowding and the pile-up of long-standing court cases on Monday, he said, but declined to share details.

In the last three years, Vandine said the ministry had “fully adopted” community-based treatment practices. The number of drug users receiving voluntary counseling and treatment via the state health system had increased, she said, without specifying by how much.

“Substance abuse awareness in community is very important to reduce stigma and discrimination, and to promote self-referral to health services,” she said.

Sem Sithat, who manages a drug harm reduction program at nonprofit Friends-International, said officials’ anti-drug tactics hadn’t changed much over the years. However, he said some local authorities do coordinate with outreach workers who offer needle exchanges and methadone treatment referrals to drug users, both harm reduction services that focus on reducing health risks related to drug use rather than criminal prosecution.

Since users, who are often poor and experiencing homelessness, move regularly to avoid arrest, it remained difficult to regularly meet with them to offer services, he said.

But some authorities notify outreach teams to avoid overlapping with harm reduction programs. “When the police and local authorities go to communities to conduct a drug crackdown, they inform our team,” he explained.

However, they don’t collaborate in all cases.

Sithat said his organization doesn’t refer users to government-run rehabilitation centers, which Amnesty reports are rife with abuse, and instead sends them to community-based treatment linked with more than 400 state health institutions nationwide.

Community-based treatment sites, in which drug users can receive counseling and other voluntary rehabilitation services at local health centers while living at home, have more than doubled from 177 sites in 2017.

Promoting a holistic approach to drug treatment, Sithat said a planned rehab center in Preah Sihanouk province could help people if users are treated and provided with social services and job training. Amnesty’s report expresses concerns that the center may be intended for involuntary drug detention.

“The drug treatment services in Cambodia are not enough, while the need is big,” he said.

“We should support them during the detox and rehabilitation center [period] and after the reintegration [into their community],” he continued, adding that users needed to have a job after leaving rehab or face greater risk of relapse.

In its report, Amnesty called on the government to decriminalize drug possession for personal use, close compulsory drug rehabilitation centers, and prioritize health care and drug treatment in community settings.

“In Cambodia, and across the world, the so-called war on drugs has failed. But there are clear alternatives based on scientific evidence that better protect human rights,” Nicholas Bequelin, Amnesty’s regional director, said in a statement.

“The Cambodian authorities must consign the abusive policies of arbitrary detention and criminalization to history and embrace a compassionate and effective new era of drug policy.”

Truckload of Dogs Rescued From Slaughter, to Be Put Up for Adoption

Updated: One Covid-19 Patient at Large, Another Refused Hospitalization

Truckload of Dogs Rescued From Slaughter, to Be Put Up for Adoption