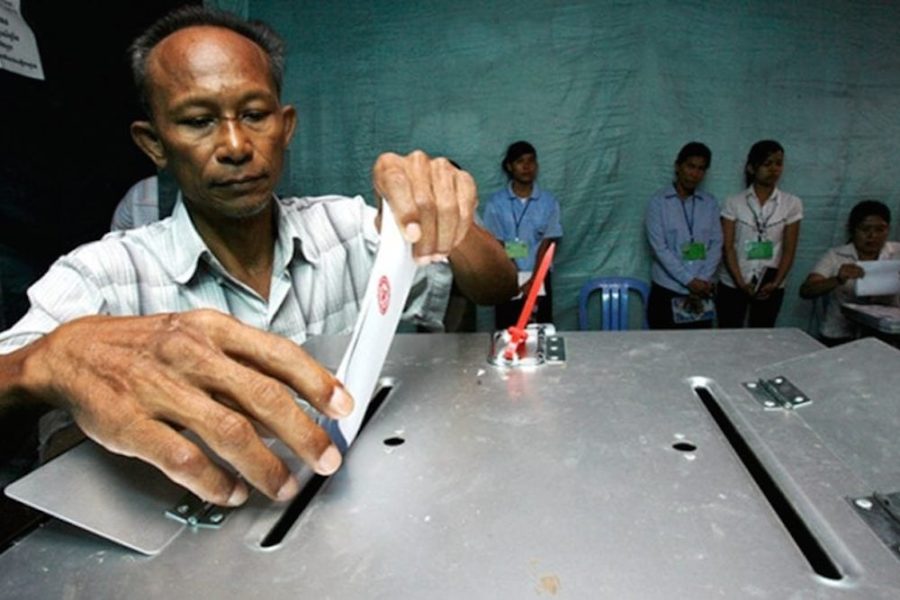 Prime Minister Hun Sen is setting the stage for heightened repression with his message over the weekend that there are opposition plans “to sabotage the upcoming elections,” civil society groups say.

A little over a year to the local-level commune elections scheduled for 2022, Hun Sen said in a message on Sunday to the country’s police force that the “sangkat council elections 2022 is the target of an attempted attack by traitorous rebels to destroy the process of this important political event.”

Citing the additional challenges of Covid-19 and a “global security situation,” he said the police must strengthen its commitment to maintaining stability and security, and subdue all opposition plans.

Hun Sen was marking National Police Day with the message. But for some observers, the ill-defined, forceful accusation was paving the way for potential broad-brush police repression.

“We need to define the ‘rebels.’ Who are the rebels? How would they ‘destroy’?” asked Korn Savang, a monitoring coordinator at the Committee for Free and Fair Elections, a local NGO.

“If we do not define guilt at this point,” enforcement would lack transparency, Savang said.

The obvious target of Hun Sen’s accusation is the CNRP, formerly the country’s main opposition party until it was outlawed in 2017. Formed as a merger between the Sam Rainsy Party and Kem Sokha’s Human Rights Party, the party pushed the ruling party to near defeat in the 2013 national election and made major gains at the 2017 commune elections.

Sokha was arrested in September 2017 over controversial accusations of treason, and the party was dissolved by the Supreme Court two months later.

Rainsy, meanwhile, has continued to spar with Hun Sen from exile in France on social media.

Meach Sovannara, a former CNRP lawmaker, said the party had always sought free and fair elections, and denied they were any sort of enemy of Cambodians.

“Those who are suffering are the nation and the Cambodian people, and those who benefit are the neighboring [countries]. They only want Cambodians to quarrel so that they can gain political, diplomatic and economic interests, and they use Cambodia as their profit market,” Sovannara said.

More than 100 CNRP supporters are currently facing trial at the Phnom Penh Municipal Court for allegedly backing Rainsy’s bid to return to the country in 2019. Rainsy did not make it onto his flight from Paris.

Am Sam Ath, monitoring manager at human rights group Licadho, said Hun Sen’s message raised concerns that it could lead to more arrests of people being labeled as “opposition groups.”

“If we look at this, this is also a political message that must tighten and monitor former opposition activists. It is not different from previous events. So, we are also worried that in 2022 or 2023, there may be a tense situation or more arrests,” Sam Ath said.

The law requires that the government create a free, fair and just environment for elections, and without it, people’s right to vote would be undermined, he said.

Em Sovannara, a political scientist, said the CNRP did not have the means for an “attack.”

“This mechanism, when there is [such] an order, when there is guidance from the leaders, then the space of freedom in Cambodia also shrinks. This is my view,” he said.

Rather than only strengthening the power of one party, the country should improve its relations on the international stage as a truly democratic country, he said.

“What makes the country progress is strong diplomatic relations with the West. [It] has to maintain a balanced foreign policy between the East and the West,” Sovannara said.

Hun Sen’s message was a counterattack to opposition criticism of the government’s handling of the Covid-19 crisis, especially of failing to protect people’s livelihoods, he said.

Interior Ministry spokesperson Khieu Sopheak said he could not confirm what clues authorities had found about anti-government plots to attack the elections.

But he said Cambodia could not be careless.

“Work to maintain [public] order, social security,” Sopheak said. “We are not too peaceful! For example, in the past, as our history has already told, [we] fell into war during the 1970s in the blink of an eye.”