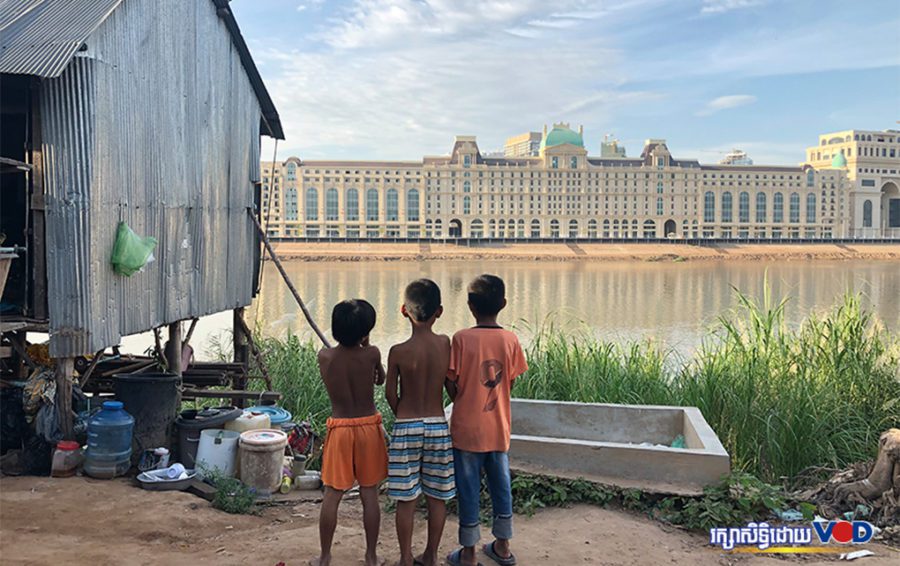 People living on the bank of the river in front of Koh Pich in Phnom Penh. (Pich Chamrong/VOD)

Analysts say many people in rural areas are seeing few benefits from the country’s brisk economic growth, and yet may be among the most seriously affected if Cambodia loses duty-free trade with Europe over human rights concerns.

The World Bank said earlier this week that Cambodia experienced 7.5 percent economic growth in 2018 — better than expected and driven largely by a rapid expansion in garments exports and in the construction sector.

A researcher of Cambodian livelihoods, Laurie Parsons, however, told VOD that rampant debt and other challenges prevented rural Cambodians from taking advantage of the economic expansion.

“Many Cambodians are unable to benefit from the country’s growth due to their family responsibilities, commitments to agriculture, and debt, which absorb the benefits of the opportunities offered by Cambodia’s robust growth,” Parsons, from Royal Holloway, University of London, said.

Moreover, most people living near the poverty line were vulnerable to economic crises, he said, a situation that disproportionately affected rural areas: About 90 percent of those below the poverty line live in the countryside.

Cambodia’s poverty rate is a matter of contention. The United Nations Development Programme (UNDP) late last year said 35 percent of Cambodians lived below the poverty line. It warned that a further 21 percent were vulnerable to dropping below the line, whether by losing their jobs or being struck by illness.

This week’s World Bank report noted one caveat with that official figure: “any negative shock reducing consumption per capita by US$0.50 would double the poverty rate,” it said.

According to Parsons, such statistics are unreliable in either case in a country that is still dominated by the informal economy and family-based agriculture.

Social development analyst Meas Nee said the country’s vaunted economic successes were all at the national level, and the economic situation at the local levels was less clear.

The statistics may have improved, but there was a lack of equality in people’s living conditions, he said.

The European Union (E.U.) recently reported that Cambodia exported $4.9 billion worth of goods to the bloc in 2018 — 99 percent of it duty-free under the Everything But Arms (EBA) trade scheme.

World Bank this week estimated that if the E.U. suspended the EBA, garment exports could decrease by more than $381 million; footwear by $128 million; and rice by $144 million.

“The loss of jobs here would affect the flow of remittances from urban areas to rural areas,” Chanco said.

According to the Garment Manufacturers Association in Cambodia (GMAC), the garment sector employs about 700,000 people — 85 percent of whom are women originally from rural areas. A further 2 million Cambodians indirectly benefit from the more than $150 million in wages paid to the workers every month, it says.

Chanco urged the government to invest more in improving the education system to address both poverty and social inequality.

“Growing evidence highlights that investment in people [is] essential to drive economic progress and sustainable development,” Dobraja said. “Investing in people and improving the quality of Cambodia’s human capital should remain at the core of Cambodia’s aspirations to reach an upper middle-income economy by 2030.”

The E.U. in February announced it was undertaking a formal review of Cambodia’s access to the EBA over concerns that the country was violating its commitments to democracy and human rights.