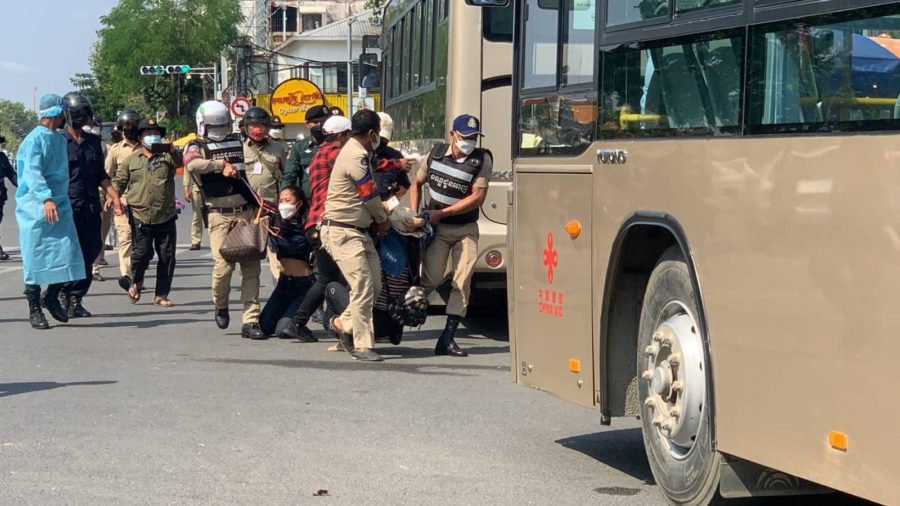 Security officials drag a woman toward a bus as authorities continue detaining NagaWorld strikers attempting to return to their protest on February 22, 2022. (Kuoy Langdy/VOD)

The rallies — which came to a halt early February as health authorities ordered all strikers into self-isolation — attempted to resume last week but saw dozens of workers rounded up and sent to a quarantine center. The attempts to restart the demonstrations were put on hold on Friday.

Striking worker Mam Sovathin said she was one of nine protesters still at a treatment center following two recoveries on Monday.

“Once we are well, we will continue to strike until we have a resolution from NagaWorld,” Sovathin said. “There is nothing to be afraid of, because we have not done anything wrong, even though some relevant ministries have blocked us from entering.”

Protester Ros Lyheng was kept in a quarantine center from Tuesday to Thursday.

“I and the other members aren’t giving up. Soon we will continue our normal strike,” Lyheng said. “We are waiting for other members who are still in hospital to get cured.”

Daily rallies began in December over mass layoffs that workers say target union leaders and members. Eleven unionists are currently in jail after the Phnom Penh Municipal Court ruled the strike illegal. Some are accused of obstructing Covid-19 measures.

The jailed unionists’ release has become one of the strikers’ main demands.

City Hall spokesman Met Measpheakdey did not answer questions on Monday, though a City Hall statement has criticized the workers for alleged Covid-19 violations and defended security forces from allegations of abuse and sexual harassment.