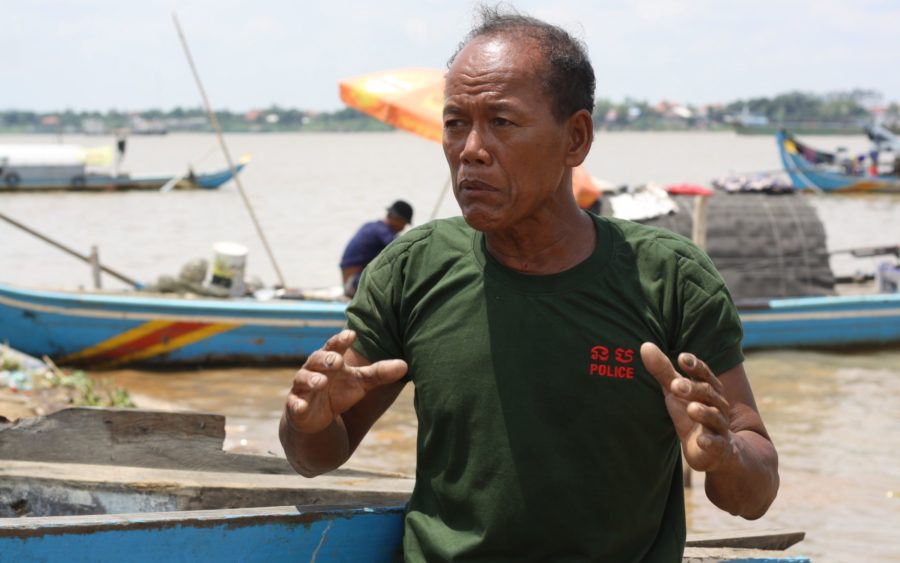 Saman Kosim, 60, talks about the damage to his boat after being hit by a sand barge, in Phnom Penh on July 12, 2021. (Michael Dickison/VOD)

A Phnom Penh fisher who was flung from his boat after a crash with a sand barge on Sunday, destroying his boat and motor, said he has received $1,500 in compensation, though he never learned the company’s name.

A man named Ta Soy visited him on the shores of Chroy Changva peninsula several times this week to negotiate the compensation, said Saman Kosim, 60.

“We do not know what the company’s name is — we only know that his name is known as Soy,” Kosim said on Thursday.

“I did not say that I was right or wrong or you were right or wrong,” Kosim said. “We faced the same incident, we both did not want this to happen, but since you are better off than me please give me $2,000 and when I die I can close my eyes.”

The man returned on Wednesday evening to hand over $1,500 in cash, Kosim said.

“All my property and money was completely lost. He said if we did not accept it, it was up to us to take it or leave it,” he said. “We are [vulnerable] like an egg — how could we confront them? … Since I was young I have never filed a complaint against anybody. If you want to give, it is up to you and I will not file a complaint against you although I lost everything.”

Kosim earlier said that the total damage to his boat was around $3,000. His wife and son were on board at the time of the accident and clung on while he was thrown overboard, he said then.

Extensive sand dredging operations are currently underway in Phnom Penh waterways amid several major landfilling development projects. The city’s last lakes of Boeng Tamok and Boeng Tompun are both being filled, while satellite cities are being constructed on the Mekong river on landfill.

Meanwhile, fishing families living along the capital’s shores have faced eviction, with hundreds of families pressed to dismantle their floating homes or seek new shores along the rivers.