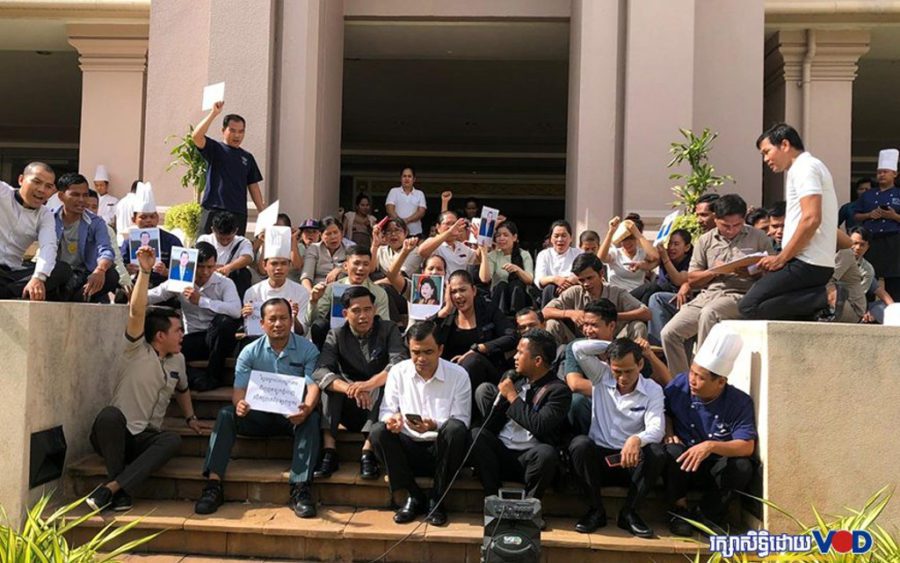 More than 100 employees of The Great Duke hotel in Phnom Penh protest to demand their wages on November 4, 2019. (Khut Sokun/VOD)

According to a statement, signed by general manager Chakrapong Paladsongkram on December 20 and made public on December 30, The Great Duke Phnom Penh will cease its operations on Tuesday due to business reasons.

“With immediate effect, the employees are requested not to come to work,” the letter published in both English and Khmer reads. “Nonetheless, the hotel appointed HBS Law [to] handle the closing process including the settlement of employee[s’] benefits according to the law. We will keep you informed of the progress from time to time.”

Kong Chanthorn, deputy head of the union representing Great Duke workers, who had been working at the hotel for 10 years, said the closure would have serious consequences for the employees. “These employees have been working here for a long time,” she said. “Some of them have worked since the beginning of the hotel’s operation … Our employees feel regret and face serious hardship in their livelihoods with its closure. Some are in debt with banks, and have expenses for their children’s studies.”

She said the employees requested proper compensation for the layoffs as they had been informed about the closure only late last week.

Touch Kosal, the union’s head, said members were scheduled to meet HBS Law on January 3. “They said they will keep all benefits for us,” he said, adding that the hotel currently employed 147 staff.

Chanthorn said the number of guests had declined since it had changed its name and increased prices. Standard going rate for a room was $300, she said.

Employees have protested a delay in wage-payments several times over the last few months. During the last protest in November, the company agreed to pay the employees, but has not yet paid them for the month of December, Chanthorn said.

The hotel changed its name in January 2018. It opened its doors in 1996 with more than 300 staff. It is owned by Thai company Boon Roong.