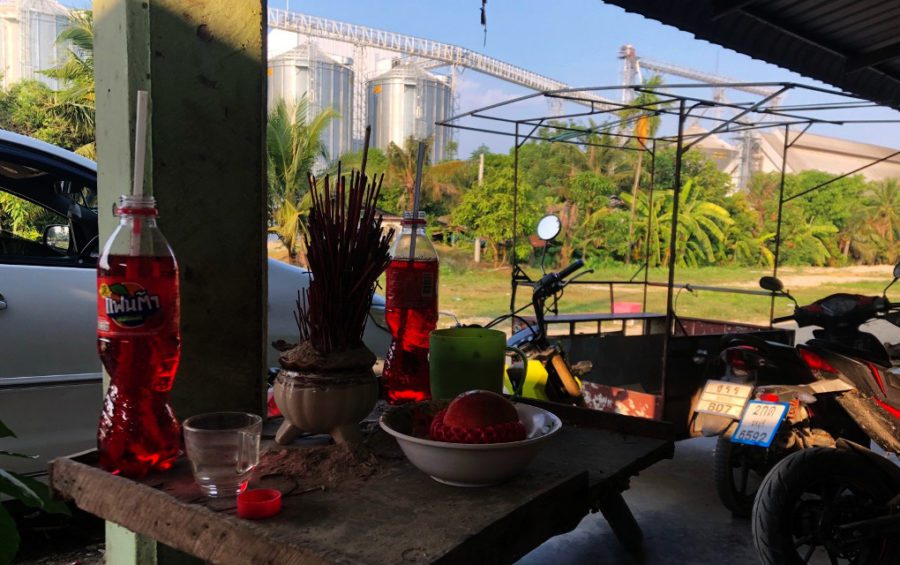 A Cambodian family’s spirit house offerings outside their rented room near a food processing factory in Chon Buri, Thailand on November 8, 2019 (Matt Surrusco/VOD)

CHON BURI, Thailand — For some Cambodian migrant workers in Chon Buri, concerns about their livelihoods will keep them in Thailand on Saturday.

Even if they support the outlawed opposition CNRP and acting president Sam Rainsy’s vow to return to Cambodia in a bid to challenge Prime Minister Hun Sen and push for new elections, they cannot take off work, some told VOD on Friday.

Voal Veasna, 33, said he was aware of Rainsy’s promised homecoming and call for migrant workers to join his return to Cambodia on Saturday, but said he and others working the overnight shift at a chicken processing plant had to keep working to earn money to support their families.

“We have no time to get involved in politics,” said Veasna, who moved to Thailand about three years ago and sends about half of his monthly salary of $350 to his parents in Takeo province.

Rainsy, who has lived abroad since late 2015, said in August that he would return to Cambodia on November 9 to rescue the nation via a “people-power” movement that aimed to unseat Hun Sen. The premier has led the country for more than three decades. Rainsy lives in Paris to avoid a slew of criminal convictions in Cambodia that he says are politically motivated.

The CNRP was dissolved by court order at the government’s request two years ago this month. The dissolution followed the arrest of party president Kem Sokha on widely criticized treason charges, which he denies.

Sokha remains under de facto house arrest. His daughter, a CNRP spokeswoman, has said Rainsy’s return pledge was a mere PR stunt, while the government has called it an illegal coup attempt.

Rhona Smith, the U.N. Special Rapporteur on the situation of human rights in Cambodia, noted in a statement on Friday that more than 200 cases of harassment and judicial actions against CNRP members or supporters this year.

Since August, Smith said she had “received credible information that at least 89 individuals have been charged with ‘plotting against the State’ and at least 52 people have been arrested.” The crime of plotting an attack is punishable by up to 10 years in prison.

Many of those CNRP members charged and jailed were accused in connection with their support for the opposition, or Rainsy specifically, often expressed via Facebook or in private gatherings over Cambodian noodles.

According to Smith, “Arrests based on exercising the rights to freedom of opinion and expression, through political discourse and commenting on public affairs are not permitted. Cambodia must respect its international obligations.”

In Chon Buri, Veasna said he worked in a garment factory before migrating to Thailand to package chicken because there wasn’t enough work or pay in Cambodia. Now, he was saving money with the hope of returning to Cambodia next year to start a small business with his wife.

A CNRP activist who tried to gauge opposition support among him and his colleagues last week could not pull him away from his work, he said.

Rainsy’s promise to return came from his heart, “but for us as young people, we only care about earning income for the family,” Veasna said.

Political confrontations lead to difficulties — like being beaten during demonstrations — for ordinary people, not the elite, he added.

More than 2 million Cambodian migrants are estimated to be working in Thailand, with some 20 percent undocumented, according to Moeun Tola, executive director of rights group Central.

Most migrant workers support the opposition over the ruling party because they see the development differences between Cambodia and Thailand, he said.

“So they have the reference to compare,” he said.

While he didn’t have specific figures on how much money or what percentage of migrants send money to their families in Cambodia, Tola estimated that most send 70 to 80 percent of their salary home, with some sending 90 percent of their wages and then borrowing from moneylenders or friends.

Horm Bory, a 37-year-old supervisor working at the same factory as Veasna, said he used to send most of his income to his parents, but doesn’t send back much now because he has his own family to support.

Bory said he has lived in Thailand for about eight years, and supported the CNRP, but did not want to talk too much about politics.

He was willing to participate in the CNRP leadership’s return to Cambodia, but could not take off days from work without risking losing his job.

“I want to go too, but our livelihood here is based on the work,” Bory said. “I’m afraid that if I go back to Cambodia, and then I turn back, I may have no job to do.”

At a condominium complex in Chon Buri, Kouy Lay from Takeo province said she moved to Thailand nine years ago when she was 21 years old.

“If in Cambodia they offered a better salary, I would go to work there,” said Lay, who sends more than half of her monthly income of $600 to her parents and 8-year-old daughter back home.

She washes and irons clothes for a living, and hopes to open her own laundry shop in Cambodia some day.

Lay said she would have liked to join the CNRP’s scheduled return on Saturday, but also could not due to work.

“When we leave our country, we know the difference between one country and another,” she told VOD. “Most of the workers here don’t like the Hun Sen regime because it’s a dictatorship.”

Lay said she wanted a “change in the country’s leadership,” and for Cambodia to develop like other nations.

Asked which party she supported, Lay suggested that the answer was obvious.

“Leaving the country and coming to work here, it must be Sam Rainsy.”

After Rainsy was unable to board a plane from Paris to Bangkok on Thursday, and the Thai prime minister said Rainsy was unlikely to be allowed into Thailand, it was unclear how the opposition leader intended to enter Thailand before walking across the border into Cambodia.

Still, Manh Chann, 22, also expressed his love for the opposition leader. Chann, another migrant, claimed he planned to return to Cambodia on Saturday because his parents wanted him home to help farm, but that he would follow Rainsy if he was crossing the border as well.

“If he was elected, he would help Cambodian people avoid suffering,” Chann said of the CNRP co-founder.