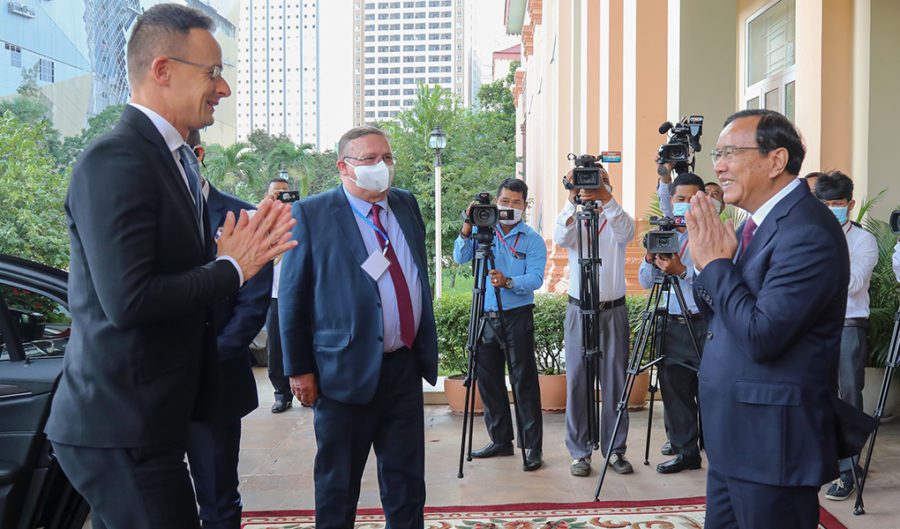 Foreign Minister Prak Sokhonn on Thursday defended his Hungarian counterpart — noting Hungary’s past political support — amid an online backlash against the foreign diplomat after his visit to Cambodia last week spurred renewed Covid-19 closures and some 1,700 people being tested and quarantined.

Hungarian Foreign Minister Peter Szijjarto arrived in and left Cambodia on November 3, meeting with several senior Cambodian officials while shirking coronavirus safety guidelines, including mask wearing and social distancing. He then tested positive for the virus after arriving in Bangkok that night.

Four people who had direct contact with Szijjarto in Cambodia — a Cambodian bodyguard in his security detail, a ruling CPP lawmaker, a senior Agriculture Ministry official and Hungary’s ambassador to Cambodia and Vietnam — have tested positive since he left the country. A Hungarian diplomat in Bangkok also tested positive after having met with Szijjarto on Tuesday in Thailand.

“The incident of Covid-19 infection cannot diminish the good intentions, the dignity and the deep friendship of Szijjarto’s visit, which brought benefits to our bilateral relations,” Sokhonn said in a Facebook post on Thursday.

During the visit, Cambodia and Hungary signed three agreements on agriculture, water management and air service.

Sokhonn, who is among a number of officials in quarantine after having met with Szijjarto, went on to note that there have been “mixed comments” on the Hungarian minister’s visit circulating on social media.

“However, it must not be forgotten that Szijjarto is the foreign minister of one of the E.U. member states, and has always dared to stand up for justice for Cambodia,” Sokhonn said. “He stands up to speak against outside interference in Cambodia’s internal affairs. He is a protester against the 20 percent suspension of the EBA from Cambodia.”

The E.U. in August partially revoked Cambodia’s duty-free and quota-free trade access to the European bloc under the Everything But Arms (EBA) scheme over “serious and systematic” human rights violations in Cambodia. The suspension followed an 18-month review process of Cambodia by the E.U. and lobbying by a number of European nations.

Sokhonn on Thursday said Szijjarto expressed deep regret and apologized for the difficulties he caused in Cambodia during a phone conversation with the minister after he had returned home to Hungary.

Szijjarto reaffirmed that he had tested negative for the virus before he left for Cambodia, and his wife, children and all members of the Hungarian delegation but one ambassador have tested negative since, according to Sokhonn.

The Cambodian foreign minister said his own health condition was normal and his two tests have been negative.

Hungarian government spokespeople have not responded to multiple requests for comment from VOD.

Last week during a video conference call, Szijjarto shared some laughs with his counterparts in Austria and Slovenia about his visit to Cambodia. The ministers joked about Szijjarto’s trip, with the official cheekily asking his colleagues to “guess” what he had gotten up to in Cambodia.

Chak Sopheap, executive director of the Cambodian Center for Human Rights, said in a Facebook comment on Wednesday below a video clip of the conference call posted on Szijjarto’s page that those involved in the conversation needed to explain.

“This is not okay,” she said, noting Cambodia’s “dire situation” with schools and businesses again disrupted and the poor being “further hurt.”

“While no one wished to be affected here, a sense of respect and responsibility is required,” Sopheap added.

Other Facebook users responding to news of Sokhonn’s defense of Szijjarto voiced more criticisms of the Hungarian diplomat on Thursday.

“Even though importing Covid, they do not bear responsibility,” said Facebook user Chetana Sreyno.

Another user Ke Nan was more direct: “You do not dare to be tested and allowed to be quarantined — this is your negligence while the victim is the people.”

Meanwhile, alongside a photo of Szijjarto, TikTok user “killa” called the diplomat “the only person I cannot forget.”

“It is nearly the end of the year and I thought the [Covid-19] risk is almost over, but he took his time to come, and why did he play like this?”