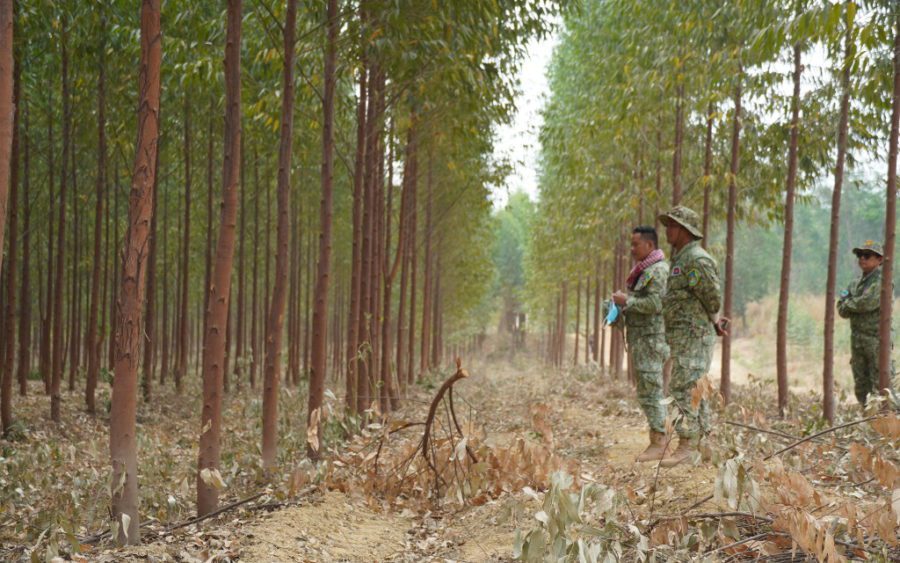 Rangers in the Think Biotech plantation near the Prey Lang Wildlife Sanctuary, in Kratie province on February 15, 2021. (Tran Techseng/VOD)

In an open letter, forestry activists said they were “appalled” by USAID recently claiming to “work directly” with them, saying they had been turned down from participating in USAID-run conservation projects, and the American agency “never supported us.”

Since last year, members of the Prey Lang Community Network have been blocked by the government from conducting community patrols in protected forests, a change they have linked to increased deforestation.

The group has previously said that USAID, which funds the “Greening Prey Lang” conservation project near the wildlife sanctuary, has gone along with the ban on community patrols, thereby “silently approving the intimidation and de-legitimization of PLCN.”

In the open letter, dated Monday, the activists said they had come together from more than 100 villages to volunteer to work “tirelessly to protect the Prey Lang forest from illegal logging, hunting, land concessions and mining.”

“We have experienced accidents, violent attacks and even death,” they said. “In all of this, USAID never supported us or defended our rights.”

They were “appalled” to see USAID recently issue a statement claiming to “work directly with the PLCN,” the letter said.

“We have never seen USAID coming to talk to us. USAID never informed us about the purpose of their Greening Prey Lang project. USAID has never asked us if we agree to what they are doing on our ancestral forest lands. We have never received any financial or technical support from USAID,” they said.

“On the contrary, we have asked for meetings with USAID on many occasions, but these meetings were always delayed or cancelled.”

USAID had told the activists that its office was not big enough to accommodate four representatives from the group’s four provinces, they said.

“This is not how we work. We work as a network, and not as individuals, whom you can buy or intimidate.”

The group had also asked to be invited to be a stakeholder in USAID projects such as Greening Prey Lang but were turned down, they said.

“If USAID does not wish to work with local and indigenous peoples, it is your decision. But please respect our network. Do not misuse our name, PLCN, for your own benefit. The statement by USAID is not acceptable to PLCN and we ask you to change it to reflect the facts,” they said.

The letter also takes issue with USAID saying that it supports the group in conducting patrols together with the Environment Ministry.

“This is not true,” the activists said.

USAID had paid individual ex-members of the network to work with the ministry in community protected areas, the activists said.

“We have to bring to your attention, that to patrol in the CPAs, the MoE forces us to promise that we will not patrol in Prey Lang again. This is how MoE tries to stop our documentation of illegal logging in Prey Lang — forcing us to accept such intimidation is not what working with PLCN means,” they said.

“Therefore, our question to USAID is: why does USAID claim to work directly with PLCN?”

In an emailed response, the U.S. Embassy said on Wednesday that USAID had engaged with community organizations to discuss their shared priority of the protection of the Prey Lang landscape.

The U.S. is “deeply concerned” about continued deforestation in Cambodia’s protected areas, the embassy said.

“It is the hope of the U.S. government that the community network, the Ministry of Environment, and other stakeholders will work together on the shared goal of protecting Prey Lang,” it said. “USAID stands ready to help facilitate that dialogue.”

Meanwhile, forestry activists have been campaigning on social media to try to raise awareness around protecting the country’s forests, posting photos with the message: “Free patrols. Arrest loggers. Do not arrest forest protectors.”

On February 5, prominent environmentalist Ouch Leng and four other forestry activists were arrested by Kratie provincial authorities and sent to court after they entered Prey Lang to monitor forest crimes, though they were later released.

Cambodian Youth Network forestry protection advocate San Mala said the continued demand to be allowed to patrol the protected areas was out of concern for the loss of forest.

“Instead of not acknowledging the truth, the ministry should take all that precious time to investigate the criminals behind [deforestation],” Mala said.

Environment Ministry spokesperson Neth Pheaktra said this week that forestry crimes were only happening at a small scale, and the ministry welcomes participation in protecting the forests but participating groups must be legally registered.

“Do not try to break the law and encourage violators [of the law]. The Ministry of Environment’s actions are not a restriction on the rights of anyone,” Pheaktra said.