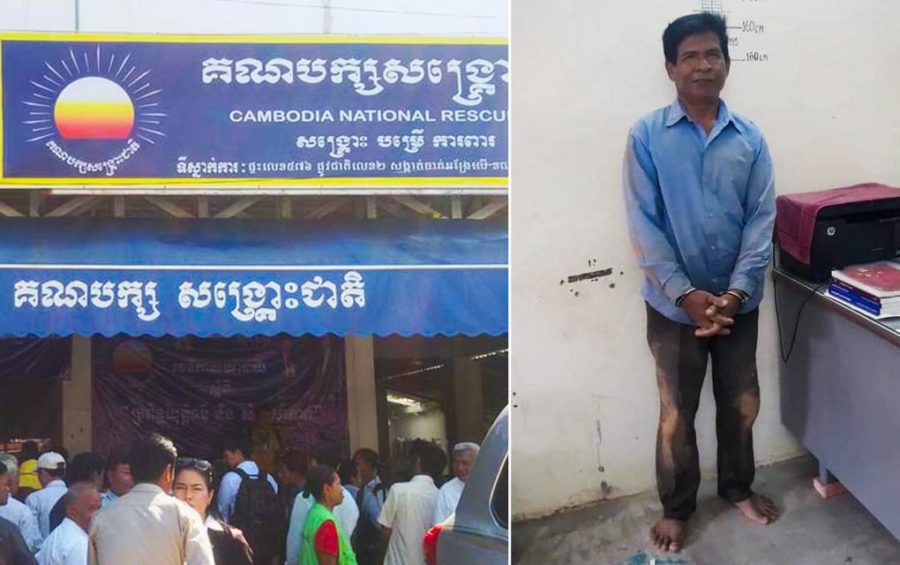 A former official of the dissolved Cambodia National Rescue Party was arrested in Kampot province over the weekend for allegedly gathering members of the outlawed opposition party in April.

A court order released by Kampot Provincial Court Investigating Judge Y Kheang said Nuth Pich, 63, was charged with violating the Supreme Court decision that dissolved his former party when he was part of a “gathering” and allegedly incited people to commit felonies and discriminate in April and May.

Pich, a farmer in Chhuk district and the former executive president of the CNRP for the district, allegedly committed the crime in Dang Tong district’s Khang Choeung commune, the order said.

Pich’s son Pun Theany, 27, told VOD by phone that he and his mother had yet to see his father since his arrest on Saturday.

“On that day, it took less than 10 minutes until they handcuffed him. My mother chased after them and asked, why?” Theany said.

“They said, if she wants to know the reason, just go to the district.”

But by the time Theany and his mother arrived at the district police station, Pich had been transferred to the provincial police headquarters, he said.

“They arrested my father covered in mud, with no shoes and torn clothes,” Theany said.

In early May, Pich had been called in by the commune chief of Chhuk district’s Boeng Nimol commune to meet, he said.

Around that time, dozens of former CNRP members were being summoned to court and called in for police questioning around the country, including at least two activists in Kampot. About 150 were questioned during the first half of the year in what rights groups have called acts of judicial harassment.

Theany said the commune chief had failed to give a reason for wanting to see his father, and, fearing political trouble, Pich avoided the summons and fled the area.

He returned to Chhuk in late July, a couple of weeks before his arrest.

The arrest came just a day after former party leader Sam Rainsy, living in exile in Paris, once again promised to return to the country, this time scheduling his homecoming for November 9. Rainsy has repeatedly promised to return before backing out, and his arrival in Cambodia is likely to be met with his arrest over a slew of court convictions handed down in his absence.

Rainsy has recruited a group of foreign parliamentarians to accompany him on his return, and has appealed to the Cambodian people to gather to welcome him and resist actions against him by authorities and Prime Minister Hun Sen.

Human Rights Watch on Tuesday called on Cambodian authorities to unconditionally release Pich and drop “all politically motivated charges” against him.

Pich helped organize gatherings of former CNRP officials and activists in April and May for meals of Cambodian noodles, which authorities considered acts of resistance against the Supreme Court decision that dissolved the party, the New York-based rights group said in a statement.

“Cambodian authorities went into contortions to find charges to bring against Nuth Pich, who merely exercised his basic rights to free speech and association,” Phil Robertson, Human Rights Watch’s deputy Asia director, said in the statement. “This is just the latest baseless act of harassment against a former opposition party member.”

“Based on our observations, this arrest may be related to political matters rather than the enforcement of the law,” Senkaruna said.

Am Sam Ath, monitoring manager at another local rights NGO, Licadho, said the arrest was further impugning the reputation of Cambodia’s justice system, which had shown itself to be subservient to the ruling party.

“It is being considered as the suppression of opposition activists,” Sam Ath said.

Chin Malin, Justice Ministry spokesman, said the activist had violated the Supreme Court order dissolving the CNRP by organizing a meeting with people as the party.

He repeated the government’s frequent defense to accusations of wielding the courts as a weapon against its rivals, saying it was only a matter of enforcing the law.

The Supreme Court dissolved the CNRP in November 2017, eight months before a national election that saw the ruling Cambodian People’s Party win all 125 parliamentary seats on offer. The poll was marked by the absence of any significant challenger to the CPP and criticized by the U.S., E.U. and CNRP, the latter of which had called for a vote boycott.

Updated on August 20 with comment from Human Rights Watch.

Clarification: This story was updated to say that HRW’s claim of a third charge, attack against an institution of the state, could not be immediately verified with the court.

Correction: Removed HRW’s earlier claim of a third charge, which the rights group corrected to incitement to discriminate.